Downtown Vancouver is entering an extended period without any major office tower openings, even as demand for workspace continues to rise, say local commercial property stakeholders. 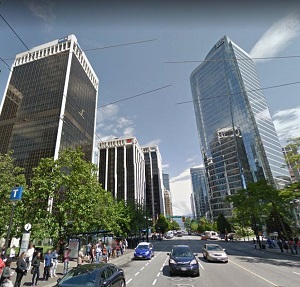 The downtown office vacancy rate is forecast to drop below five per cent, with no new buildings expected in the next three years, said Jeff Rank, a senior vice-president of leasing with Vancouver-based QuadReal, citing figures from Jones Lang LaSalle (JLL). He was speaking on a panel at the Vancouver Real Estate Strategy and Leasing Conference earlier this month.

The previous wave of office tower construction pushed the downtown vacancy rate up to about 11 per cent in 2011, but vacancy has been falling ever since, said Rank.

“We are decidedly in a landlord’s market downtown,” said panelist Mark Trepp, a senior vice-president with JLL.

Trepp said the downtown office vacancy rate fell to 6.9 per cent in the third quarter of this year, down 230 basis points from a year ago. He said it’s been more than a decade since Vancouver saw downtown vacancy like this. Trepp said JLL recently tallied how many spaces of 20,000 square feet or larger were available downtown, compared to the number of tenants looking for spaces that size.

“There is a total of 10 spaces available in 20,000 square feet or greater in the downtown core, eight of which have conditionally-accepted offers or multiple offers on them,” he said.

Seventeen tenants were looking for such properties.

“I can’t remember in my 25 years of leasing a time when demand has outstripped supply at the extent that it’s happening right now.”

Trepp said JLL has also been searching for 60,000-square-foot space for a tenant in the downtown core. It has unsuccessfully written eight offers on eight different spaces. Most of the competition for those spaces is coming from large international or U.S.-based Fortune 500 companies looking to set up or expand their footprint in Vancouver, he said.

Many are tech firms and the vast majority of those are software developers.

“They’re making all the money,” he said. “I see the Vancouver market in general maturing as a city in terms of businesses wanting to come here,” said David Haugen, director of leasing at Canderel, a nationwide property developer, broker and manager.

As for new developments, Credit Suisse/Real Group just opened the 32-storey The Exchange with its 372,000 square feet of office, retail and hotel space. The National Bank anchors the building. The 202-room hotel will be run by Executive Hotels and is set to open in June next year.

Meanwhile, Bosa Developments is now marketing a 30-storey, 375,000-square-foot office building at 320 Granville Street, half of which is being sold as strata office.

But it will be a few years before there are any openings in the next wave of office tower construction.

“Vacancy is going to get tighter,” Haugen said.

There was one somewhat dissenting voice, however. Ross Moore, a senior vice-president with Cresa, downplayed the discussion of a looming office shortage.

Despite the recent wave of construction, Moore said Vancouver still lacks world class office towers, save for a few exceptions. In the past 10 years, Metro Vancouver has added 350,000 residents, Moore said.

“Vancouver should have built more office space, but for a whole variety of reasons, it didn’t get built,” he said.

One of those reasons is the entitlement process for an office tower in Vancouver, Trepp said.

“We’re in a market where we have very little supply … coming down the pipeline,” he said. “I’m told, depending on which developer you talk to, it takes three to five years to get an entitlement to build an office tower downtown.

“If we don’t fix that problem somehow, we’re going to miss a tremendous opportunity to capture a lot of this demand,” he said.

Trepp said of the several office tower projects under proposal or consideration only about seven — totalling about 1.5 million square feet — have development permits and are ready to go.

That means it will be at least two to three years before any major new office inventory comes to the market.