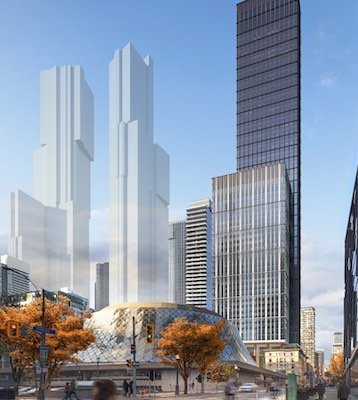 Located at the intersection of the city’s financial and entertainment districts, the tower would encompass the current heritage-designated properties at 212, 214 and 220 King St. W.

The announcement is a vote of confidence for downtown Toronto, which has suffered from a variety of restrictions during the COVID-19 pandemic, but which most of the country’s major developers, office and residential owners believe will bounce back once the crisis has been controlled.

Cooper is among those who continue to believe in the core, which has seen massive development during the past decade. An influx of sublease office space has increased vacancy rates in the core to 3.8 per cent (at the end of Q3 2020, according to Avison Young), but Cooper predicted top-quality space will be back in high demand.

“We believe and continue to believe that demand for incredibly well-located and designed mixed-use buildings will increase as residents and tenants expect to have it all,” Cooper said in the announcement. “With a strong focus and importance placed on amenities, transit, connectivity to the city, outdoor spaces, and a serious approach to health and wellness.

“212 King Street West will become the best address in the city.”

Plans for the project have been filed with the city, and now face the standard approvals process.

The 1,017-foot tall building would be at the northwest corner of King and Simcoe Streets, opposite the Roy Thomson Hall music and entertainment venue. If approved for that height, it would become Toronto’s tallest office building, usurping First Canadian Place (978 feet).

Dream and Humbold appointed New York-based SHoP Architects and Canadian firm Adamson Architects to design the tower. SHoP has a reputation for blending heritage structures into new buildings having designed two of the three such projects which have been approved in the history of New York City (111 West 57th St, and 9 DeKalb Ave.).

Humbold has been active in the neighbourhood since acquiring 214 King St. W. from General Electric in 1976. It had formerly been used as a manufacturing facility. 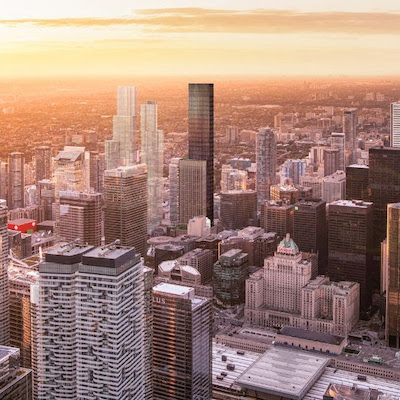 As such, the firm has witnessed the transformation of the area, including the removal of a large industrial rail yard to build Roy Thomson Hall and Metro Hall. That project was a major catalyst for what is known today as the Entertainment District.

“We are excited to unveil a design that not only honours our city’s rich architectural history but injects new energy into the downtown core,” said Robert Singer, vice-president of Humbold Properties, in the release. “We are thrilled to be partnering with Dream to create a new vision for this unique intersection and to carry these buildings’ legacies on for generations to come.”

The design creates generous setbacks and recessing of the tower, which is intended to give the buildings at-grade the space needed to maintain and enhance their presence along King Street.

A civic-scaled atrium would double as the office lobby and creates visual connections to Roy Thomson Hall. The atrium, which will connect to Toronto’s extensive underground PATH pedestrian and retail network, will be adaptable to host special events.

“We know we have to move forward and innovate, but we need to do so in a way that demonstrates sensitivity and sensibility, and contributes to the life of a city,” said Gregg Pasquarelli, a founding principal of SHoP, in the release. “The soul of the building lies in the intensity of details. It’s the materiality, the connection to Roy Thomson Hall and David Pecaut Square, and the way light fills the atrium and creates a relationship between the indoors and outdoors.”

The project is the latest in a series of initiatives by Dream Office REIT in downtown Toronto.

Among its other ongoing investments is the Dream Collection of 11 “boutique luxury” office buildings along the Bay Street corridor. The REIT is repositioning those buildings, which comprise about 500,000 square feet of space, with a multi-year series of upgrades.

Dream is also part of a multi-developer joint venture with the Mirvish+Gehry project, a multi-tower mixed-use project just a few steps from 212 King.