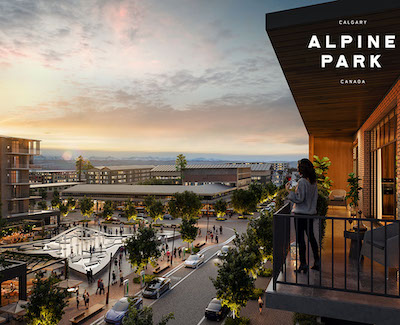 “We started assembling this development in 1997 and today, 23 years later, we are proud to commence development of this exceptional project,” said Michael Cooper, Dream’s president and chief responsible officer, as the signature development officially broke ground Thursday.

“Alpine Park is among some of our most prestigious mixed-use communities, along with The Distillery District and Canary District in Toronto and Zibi in Ottawa. We strive to build communities that help make peoples’ lives better.”

Cooper then took those assembled for the launch on a walk down memory lane.

“We started our company in 1994 and the first investments we made were in Western Canada. I’ve been walking this land since we bought the first 320 acres in 1997. We knew the development would have to wait until the Ring Road was complete (a new route being constructed which will provide easy access from the site to the rest of Calgary),” he recalled.

“We went from 300 acres to 1,800. We have an enormous position here and it’s one of the best positions of land we have. It’s one of the best positions in Calgary and after 23 years, we now have a chance to build a luxury community that’s totally integrated with how people want to live, with incredible access to the Ring Road and the rest of the city, good access to the mountains and Fish Creek Park.

“It also has 23 years of growing anticipation. So this is a very big time for us. It’s actually amazing that with an energy crisis, a health crisis, an economic crisis, after 23 years we’re launching in that.”

15 years to build out Alpine Park

The master-planned community is slated to take 15 years for full buildout. The community will be home to about 10,000 residents with a variety of home styles by prominent Calgary homebuilders Calbridge Homes, Cardel Homes, Genesis Builders and Homes by Dream.

The total number of homes to be built is still being determined for the 646-acre site, which is in the final design phases. Dream plans to launch first home sales in the latter part of 2021.

“We’ll have a mix of housing units from single-family to attached homes. Most of our homes though will be laned product, not front-drive garage, which makes us a little different,” said Tara Steell, general manager of Dream’s Calgary Land Division. 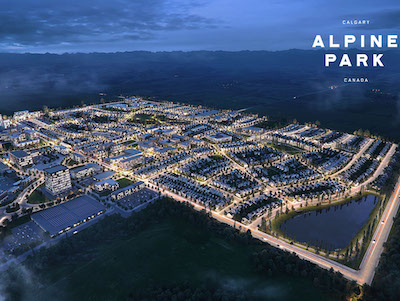 A view of much of the residential area at Dream Unlimited’s Alpine Park. (Courtesy Dream)

“Then we have townhouses. . . . What’s unique about them is they’re drive-under. So the garage is underneath the unit and they will be accessed off the lane as well.”

A Village Centre is also planned for Alpine Park on about 100 acres of the community. It will include a grocery anchor, perhaps a pharmacy, gym and curated smaller and unique retailers. The exact amount of space for the centre is also still in design.

“We envision a walkable community,” Steell said. “The bulk of our units are within an eight-minute walk to the village core. So the idea is, we’re designing our community a little bit differently.”

Alpine Park is located at 146th Avenue and 37th Street S.W., on the west side of the city and deep in the southern sector. It has spectacular views of Calgary’s downtown as well as the snow-capped Rocky Mountains.

“For us, and for someone who has grown up here like myself, 2020 is a year and that’s all it is,” Steel said of the current challenges.

“We’re really focused on the future and to move  a community like this forward it takes a couple of years to get it right. We’re launching (sales) in the fall of 2021. So it takes us a good year and a half to be ready for that.

“We believe that looking into the future Calgary, and particularly the west side of Calgary, has a strong market and a strong desire being close to the mountains and Kananaskis (Country),” she continued.

“With the Ring Road fully opening next fall, it’s unprecedented to be able to get downtown as well as get to the mountains.”

Cooper said Calgary is a wonderful place to live with an entrepreneurial, active population which is starting to move the city in new directions, including changing how and where they work.

“We’re very excited about the future for Calgary,” he said, calling six years of declining economic activity “devastating.” However, “we’re starting now and we’re going to be here for the next 15 years doing this. So, hopefully we’ll be roaring when the economy comes back.”

Dream also has residential projects in the nearby towns of High River and Crossfield.

It has about $600 million of industrial real estate and $120 million in office buildings in Calgary. Cooper said Dream does still like the city’s industrial sector, but suggested it isn’t looking for other major investments in the area at this time.

“We’ve got over a billion dollars invested in the city,” said Cooper. “We’re really excited about getting this one going (Alpine Park) in the city. We’re looking a little bit at industrial, but we kind of have a lot of money invested in the city and we’re happy with what we have.”

When asked about the overall Canadian real estate market, Cooper said the industry and the stock market are being driven by a low-interest-rate environment.

“I think the federal and provincial governments have really tried to keep it stable through this crazy time,” he said. “I think a lot of companies have been unbelievable leaders in terms of taking good care of their employees during this time.

“People feel way more secure than you would think from the headlines and that’s leading to people being comfortable buying houses.”

Dream said the vision for Alpine Park was shaped in collaboration with Peter Calthorpe’s HDR/Calthorpe, widely considered one of the founding fathers of the new urbanism movement. Civitasis is another partner, a firm known to Calgarians for its work on St. Patrick’s Island.

Dream is one of Canada’s leading real estate companies with approximately $9 billion of assets under management in North America and Europe.

Across the Dream platform there are approximately 12,300 units for development and over 9,100 acres of development land in Western Canada.

Mario Toneguzzi Commercial Redevelopment Edmonton Jul. 27 2020
M
Mario Toneguzzi Business reporter
Mario Toneguzzi, based in Calgary has 37 years of experience as a daily newspaper writer, columnist and editor. He worked for 35 years at the Calgary Herald covering sports, crime, politics, health, city and breaking news, and business. For 12 years as a business writer, his main beats were commercial and residential real estate, retail, small business and general economic news. He nows works on his own as a freelance writer and consultant in communications and media relations/training.