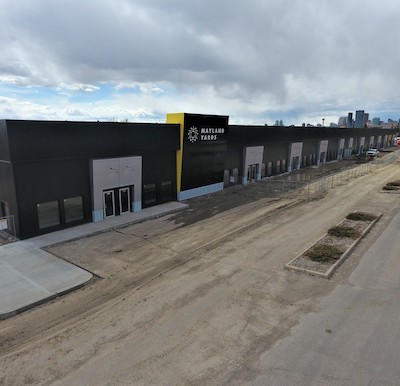 The company’s most recent projects are Mayland Yards in Calgary, an industrial asset, and North District in Edmonton, a retail property. Its total Canadian real estate portfolio is about $220 million composed of 50.4 per cent residential, 27 per cent office and 22.6 per cent industrial.

“Today, we manage more than $1 billion of assets across numerous investment vehicles and advisory relationships and have considerable experience in originating, structuring and financing investment transactions and managing risk in alternative assets,” said Matt Crowley, portfolio manager and director of investments for the Calgary-based company.

ICM also has offices in Atlanta, Mexico City and Munich.

“Our team has grown substantially and is made up of investment and operating professionals with extensive experience, collectively having acquired and/or managed over $7 billion of assets globally.

“In Canada, our focus is in the Western provinces. We are interested in mezzanine lending opportunities and select opportunistic and value-add investments. We are cautious of where we are at in the cycle and the business case for any investment has to pencil-in terms of new market realities.

“We have over $200 million of deals in our pipeline that we are actively working on and Canada represents only a few per cent of that total.”

In Canada, the company has 13 properties and development projects comprising more than 750,000 square feet. Almost 60 per cent of its portfolio is in Edmonton, 27 per cent in Calgary and 13 per cent in Toronto.

The majority of its total assets under management, about 67 per cent, are in the U.S.

“It’s been a pretty active first part of the year. We’ve made a few acquisitions in Mexico. We’ve been advancing a number of projects here in Canada and we have a number of U.S. projects that we’re moving forward with,” said Crowley. “Probably the back half of the year, we’ll be more involved in acquisitions in the U.S. than we have in the front half.

“There’s been a lot of activity. We haven’t really slowed down in terms of our development projects.”

Those projects include the industrial condo development Mayland Yards in Calgary and North District in Edmonton.

In Mayland Yards, the former warehouse has been turned into 20 individually titled industrial condominiums ranging from 2,160 square feet to 4,320 square feet, and in price from $518,400 to $1,015,200. Phase 1 of that project is wrapping up this summer.

“We completely renovated it. We took everything down to do the superstructure. Completely new concrete and new exterior. New roof. Everything’s brand new,” said Crowley, adding every unit also has its own yard space.

Mayland Yards is located in central Calgary minutes from the downtown core. It’s also just off of Deerfoot Trail, the busy north-south highway on the east side of the city. ICM purchased the site in late 2018.

The North District in Edmonton is a former car dealership along 97th Street where the 25,000-square-foot showroom was converted into quick-stop retail, with a convenience store and other shops. The first phase was substantially completed in Q1 of this year.

“We completely renovated it. We have a car wash in there right now, Circle K convenience store, a few other in-line retailers. It’s a high-traffic corridor and we’ll bring on two other buildings there in a future phase,” said Crowley.

ICM expects to have some light medical use in North District in those future phases.

Lee Brown, director of marketing for ICM, said that while North District and Mayland Yards are different, with one being retail and the other industrial, the company is constantly looking at adapting and repurposing existing properties depending on how the community has changed.

“Our Alberta strategy has been very much that taking land and repurposing it, rather than heading out into the far reaches of the city and trying to make people come to us,” said Brown.

Crowley said ICM is still interested in opportunistic developments and Calgary is continuing to densify with people wanting more urban locations, to be more centrally located.

“They’re valuing neighbourhoods, amenities and that whole ecosystem more than they have before. I think that demographic shift continues,” he said.

The company is currently advancing a couple of residential projects through pre-development stages in Edmonton and Calgary. ICM will wait for the right market conditions before making any formal announcement to market.

“For the right opportunity and risk profile, we’d be open to really any asset type,” he said.

Mario Toneguzzi Commercial Renovation Calgary Jun. 11 2020
M
Mario Toneguzzi Business reporter
Mario Toneguzzi, based in Calgary has 37 years of experience as a daily newspaper writer, columnist and editor. He worked for 35 years at the Calgary Herald covering sports, crime, politics, health, city and breaking news, and business. For 12 years as a business writer, his main beats were commercial and residential real estate, retail, small business and general economic news. He nows works on his own as a freelance writer and consultant in communications and media relations/training.