In the age of COVID-19, people are realizing home is more and more important, says developer Geor... 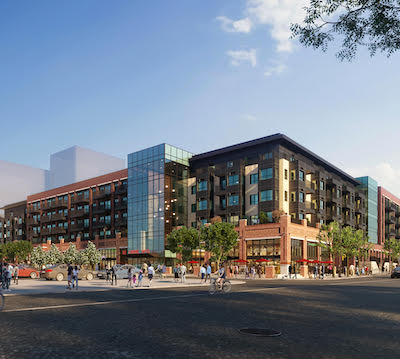 The mixed-use The Louvre will be the latest addition to Procura’s Century Park in Edmonton. (Courtesy Procura)

And that fits neatly into his vision for the latest building on Procura’s 32-acre Century Park in Edmonton, a mixed-use complex of apartment buildings, condos and retail.

The Louvre will be a 307,000-square-foot, six-storey apartment building with 358 units.

Bird Construction was recently awarded the contract for the concrete and wood-framed building, which includes two floors of parkade. It will be completed in three phases, with first occupancy in the summer of 2021, Schluessel told RENX.

The building is designed with an art theme, Schluessel said, with plans for amenities including an art school, handicraft room, art in the corridors, fitness facility and golf simulator, and seven-storey atriums. Three glass elevators will offer views to the city skyline.

“We’re trying to make every building have a theme that caters to something of interest to different people,” Schleussel said.

“I think people are gravitating to living in a quality environment — a lot of amenities or nice lobby and very comfortable suite. Home is more important to people right now. If you’ve got to look at the same walls around the clock, it’s got to be nice.”

The Louvre and Century Park

The building will include live-work units for tenants with small businesses who want small commercial spaces. Schleussel suggested they would be suitable for something like a counselling practice or a small design firm.

There is also 8,800 square feet of retail space in the Louvre, including a restaurant space.

Procura plans to seek an operator for the art school space to bring in instructors for art classes.

The most recently completed building in the complex is the 18-storey, 175-suite Central Tower, which includes a gardening amenity. It is about 75 per cent occupied and Schluessel said it should be fully occupied by July.

Several condo buildings on the Century Park site are sold out.

Features like the garden plots and art school are part of Procura’s philosophy around the development.

The Century Park development plan involves finishing and leasing up buildings one at a time.

“The next building may be more about heritage. It’s called Time Square,” he said. That project is still in the concept stage.

The complex is transit-oriented, built at the southern end of Edmonton’s LRT. Parking in the complex is designed on a flex model, with non-resident commuters able to pay for access to some spaces during the day.

Procura plans to develop The Stables at Mayfair in the future. Schluessel said the company is seeking a tenant before proceeding with the property.

It also has plans for a development on a 100th Avenue property currently occupied by Dwayne’s Place, a men’s hostel being operated by the city’s Homeward Trust agency, serving hard-to-house tenants.

Schluessel said he is waiting for the city to decide how long it wants to continue operating the current facility before going ahead with that project.

A plan to launch a publicly traded rent-to-own company called OpTown has not proceeded, Schluessel said.

The firm, which would have implemented the plan in Procura’s properties and acted for other landlords as well, would have offered long-term renters an option to build equity which could be used as downpayment on an eventual suite purchase.

“We were going to go public with it but it wasn’t successful raising capital, so we just left it,” Schluessel said. “We’re finding that the rental market is so strong anyway, we’re happy just building and renting.”