Dream Industrial REIT (DIR.UN-T) is moving forward with its expansion into the U.S, buying a four-property portfolio of industrial properties in three hub cities for US$103.3 million. 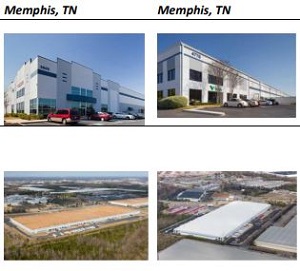 The properties are located in Memphis, Tenn. (two properties), Orlando, Fla.; and Charlotte, N.C. The acquisitions comprise just over 2.0 million square feet of gross leasable area and are 100 per cent occupied by a mix of large, blue-chip companies and medium-sized enterprises, including Coca-Cola Refreshments USA Inc. and Nissan North America.

Dream says the base clients are all signed to triple net leases with built-in annual rent increases.

“We believe the acquisition demonstrates the ability of the trust to establish a reputable platform quickly in the United States and be successful in sourcing opportunities at attractive economics,” said Brian Pauls, incoming CEO of Dream Industrial REIT, in a release announcing the purchases. “Within six months of our announced strategy, we have attained a meaningful scale of $190 million of high quality assets in excellent industrial hubs that we would look to for future growth opportunities.”

Dream unveiled its planned move into the U.S. market in July. At the same time, it purchased a 717,000-square-foot distribution facility in Nashville, which is leased to Nissan North America.

The most recent acquired properties have a weighted average lease term of 6.1 years. The going-in capitalization rate is approximately 6.4 per cent (or 6.3 per cent including capital requirements through 2019, which includes a roof replacement on one property).

The balance will be funded by the trust’s working capital and its revolving credit facility.

The trust will also use a portion of the proceeds from the public offering and private placements to fund the repayment, upon maturity, of its outstanding 6.75 per cent convertible unsecured subordinated debentures due Nov. 30 and for general trust purposes, including funding future purchases.

Details about the industrial acquisitions

The four industrial properties are distribution and light manufacturing facilities with an average ceiling height of 31 feet and ample trailer and car parking.

Closing of the acquisitions is expected to occur in stages between Dec. 1 and Jan. 15.

Dream says after these purchases close, Nissan will be its top tenant with almost 1.2 million square feet under lease. Spectra Premium Industries (643,368 square feet) and TC Transcontinental (523,345) round out its top three tenants.

Having announced the trust’s intention to enter the U.S. market in July 2017, this purchase and the earlier acquisition of the Nissan facility create what Dream calls “a reputable U.S. industrial platform” comprising nearly 2.8 million square feet.