Dymon Storage has a simple strategy, though the execution can be quite complex; bring storage clo...

Dymon Storage has a simple strategy, though the execution can be quite complex; bring storage closer to the people who need it, but do it in increasingly innovative ways. 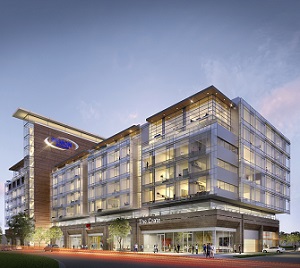 This proposed Dymon facility on Dufferin St. in Toronto will include storage, offices, retail and condos in a nine-storey building. (Rendering courtesy Dymon)

The Ottawa-based company currently has eight locations, but as it expands from its roots into the Greater Toronto Area, it will open three more before the end of the year and another six in 2019.

Many of these properties will be much more than just a storage facility — think mixed-use developments — and that’s opening new doors in new neighbourhoods says Dymon’s senior vice-president.

“We locate our facilities in very highly visible, high-traffic nodes, usually adjacent to big box retail,” said Dymon senior vice-president Steve Creighton. “We’ve moved self-storage into the mainstream and no longer do people have to go to industrial parks or rural areas or along the 400 series of highways to get to their storage facility.

“We advertise ourselves as an extension of your home or place of business, and we want that extension to be in your community.”

The most unique Dymon facility will be located near Dufferin Street and Wilson Avenue, north of Highway 401, in Toronto. The 600,000-square-foot building will feature retail on the ground floor, offices on the second floor, condominium suites wrapped around the exterior on the third through ninth floors, and storage units in the core.

Creighton said that, pending approval by the City of Toronto, it will be the first time these four uses have been combined in one location. He hopes construction will start in the fall and expects it to take two years to complete.

“Part of our success in getting into some of the areas that we want to get to is being able to do mixed-use development and be more than storage,” said Creighton. “We can mix up the uses and make it more community-oriented and create more jobs and things that zoning requires.”

Dymon will also open the world’s largest storage facility in the former Carlton Cards manufacturing plant at 1460 The Queensway in Toronto. It will have 500,000 square feet when it opens later this year across the street from an IKEA.

“We’re putting a whole new face on it and totally gutting inside and changing it,” said Creighton. “We’re creating a second floor on part of the property.”

A 160,000-square-foot Dymon location, which will include third-party retail on the ground floor, will open at Highway 7 and Airport Road in Brampton in October.

Dymon also purchased the former Target site at the Five Points Mall in Oshawa from RioCan Real Estate Investment Trust. It tore down the structure and is building a storage facility which will also include third-party retail. Another two pads will be built for additional retail.

Construction will start this fall on a Dymon location at 1 Mobile Dr. near the border of Scarborough and North York, and it recently bought a property at 850 York Mills Rd.

Dymon is going through the planning stages for a facility on Guelph Line in Burlington. It just closed on the purchase of a site at 845 Burloak Dr. in Oakville.

Closer to its Ottawa roots, Dymon will open a 140,000-square-foot location on Carling Avenue in the Lincoln Fields area in October. It also has a location at Baseline Road and Clyde Avenue that will feature a combination of storage, retail and an additional pad for a restaurant.

Dymon is building a facility on Industrial Avenue in the Ottawa Train Yards area and has a site on Strandherd Road adjacent to a Walmart in suburban Barrhaven.

Creighton said other potential Dymon sites in Ottawa, the GTA, Burlington and Hamilton are at various stages of due diligence.

In addition to new locations, Dymon is introducing a new look to the sites and offering more goods and services on top of:

A new retail concept will offer about 1,500 home décor products for storage, including baskets, containers and closet organizing solutions. Some locations will offer wine storage connected to an upscale lounge, as well as some short-term office rentals.

“Businesses are now representing about 40 per cent of our customer mix at some of our locations,” said Creighton. “Businesses enjoy the flexibility of not having to enter long-term leases and the other services that Dymon has to offer.”

Despite offering more than many competing storage companies, Creighton said economies of scale enable Dymon to be competitively priced and “offer a storage solution where the customer sees a great value proposition.”

With Dymon’s increased focus on the GTA, where many people are forced to live in condo and apartment units due to affordability issues, Creighton is confident demand will continue to be strong for its services.

“For all the things that need to fit into your life, they’re not going to be able to fit into your 465-square-foot condo. Whether it’s your bike, your golf clubs, your Christmas decorations, your seasonal wardrobe, your summer furniture or whatever it might be, you’d be living in a very cluttered space if all that stuff was with you.”