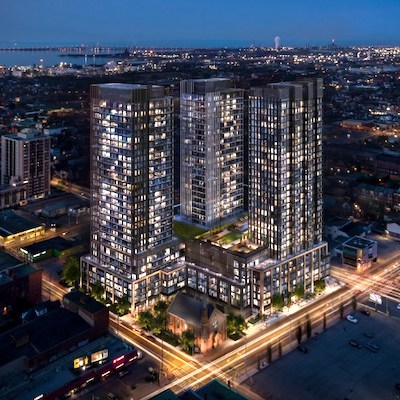 The Toronto-based developer acquired the 41 Wilson St. site a few years ago from partners for an undisclosed price and took it through the zoning and entitlement process so it’s now ready to be brought to the market.

Units at The Design District will range from approximately 500 square feet to approximately 1,000 square feet and include studios through three-bedrooms, which Pashootan believes will appeal to a wide range of buyers. He’s not ready to announce pricing yet, but said units would be “very competitively priced” compared to what’s already on the market.

Pashootan expects all of the units to be sold by March of 2023, when construction is expected to begin. The three towers are slated for mid-2026 occupancy, with each one following about 30 days after the preceding building.

Burdifilek, the interior designer for The Design District, has worked on projects around the world. A lot of time was spent on maximizing space utilization in the units and floor-to-ceiling windows will provide a semblance of extra space in the suites.

Pashootan said the high standard of design and finishes in the suites will carry over to the lobbies, which will include Louis Vuitton custom furniture.

The site is surrounded by shops, restaurants, cafes and services. It’s within walking distance of an anticipated light rail transit (LRT) stop and the Hamilton Centre GO Transit station. Pashootan said the site has a 97 Walk Score and a 93 Transit Score.

The Design District will be EMBLEM’s second Hamilton development and it’s looking for more high-rise sites in the city.

“We believe that Hamilton is one of the most opportunistic areas for population growth and price appreciation because of a perfect storm,” said Pashootan, citing large government and corporate investments in the city, including the LRT, digital infrastructure and the revitalization of the harbourfront and downtown entertainment hub.

EMBLEM was founded in 2018 and has projects in Toronto, Mississauga, Ottawa and Hamilton. The company’s development portfolio consists of more than 4,000 residential units encompassing more than 3.6 million square feet and representing more than $3.3 billion in value.

EMBLEM’s other downtown Hamilton development is 1 Jarvis, which Pashootan said launched in the midst of a COVID-19 wave last year and sold all of its 354 units in 48 hours.

Ground was broken on the 15-storey condo within three months and construction is up to the third floor, with completion expected in 2024.

Arte Residences is a Studio JCI-designed, 18-storey, 427-unit condo at 89 Dundas St. W. in Mississauga, just south of the Cooksville GO station and 300 metres from the Dundas stop of the future Hurontario LRT line.

Close to 90 per cent of Arte’s units were sold within three weeks of launch. Shoring has been completed and excavation is underway. A penthouse collection of suites hasn’t been released yet, but will be closer to completion, which is expected in early 2025.

The Studio JCI-designed 17-storey, 336-unit Artform Condos is located close to Arte at 86 Dundas St. E. in Mississauga. All of its units, except for penthouse suites that will be released closer to the anticipated early 2024 completion date, sold very quickly.

Four levels of underground parking have been installed and construction is up to the second storey.

Capital Park is a four-building rental apartment complex with about 300 units in Ottawa’s Robinson Village, located south of the Sandy Hill neighbourhood and near the University of Ottawa and Lees LRT station.

Capital Park’s first building is complete and has occupancy, with more than 50 per cent of units leased in four weeks. Its second building will be ready for occupancy this week. The third building should be completed by the end of the summer.

The complex’s fourth building is on schedule to be finished in the first quarter of 2023.

“In a market with tradespeople going on strike, COVID slowing down the number of trades that can be on-site and supply-chain issues, we’re pleased to have been able to keep our construction on schedule,” said Pashootan.

EMBLEM will launch sales this fall for a 40-storey condo with 522 suites at 234 King St. E. that Pashootan believes “will have among the highest standards ever seen in downtown Toronto.”

Burdifilek will also be the interior designer for this project. Pashootan said its lobby will feature elaborate use of water, including a stone sculpture commissioned in Europe.

EMBLEM will also bring a project in Toronto’s Leaside area, in close proximity to a future public transit stop, to market this fall. It will feature two boutique mid-rise buildings with approximately 250 units with large terraces.

More condo launches are planned for 2023.

“We continue to seek investment opportunities for land and we’re looking to continue to acquire strategically and consistently,” said Pashootan.

“We have a long-term view as a business and aren’t focused on short-term profits at the expense of the design and quality of finish of the buildings we do. Every project we do is of a materially higher standard than what already exists in the area.”

Investment in Hamilton CRE on record pace in 2021

Steve McLean Residential Redevelopment Ontario Jun. 24 2022
Steve McLean Business reporter
Steve is a veteran writer, reporter, editor and communications specialist whose work has appeared in a wide variety of print and online outlets. He’s the author of the book Hot Canadian Bands and has taught reporting to college students. He is based in Toronto.