Investment in Hamilton CRE on record pace in 2021

Hamilton had a record-breaking $434.42 million in commercial real estate transactions in the thir... 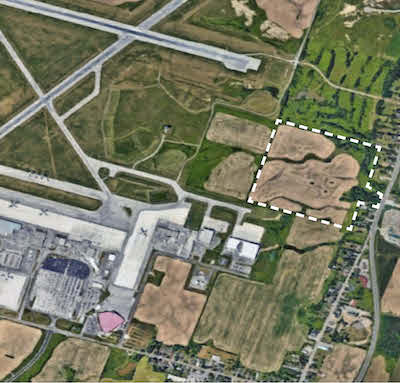 This 56-acre tract of industrial development land adjacent to Hamilton airport was acquired by Pure Industrial. (Courtesy Forge and Foster)

Hamilton had a record-breaking $434.42 million in commercial real estate transactions in the third quarter and is on pace for a record year.

“It’s the first time we’ve ever seen anything go over $400 million in a quarter,” Forge & Foster Investment Management strategy and acquisition associate Alex Manojlovich told RENX. “The closest we’ve come is Q4 of last year when we hit $395 million.”

Forge & Foster publishes a weekly email newsletter on commercial real estate sales and news in the Greater Hamilton Area in addition to its investment and asset management activities.

Hamilton transactions have totalled $1.14 billion in 2021 and should easily surpass the previous high-water mark of $1.2 billion that was reached last year when third-quarter deals were $322.31 million.

“There’s sometimes one mega-deal where something goes for over $100 million that drives the total, but there wasn’t a massive influencer that swayed the total in the quarter,” said Manojlovich.

Seventy transactions per quarter is typical for Hamilton, according to Manojlovich. There were 83 in the most recent quarter, 77 in the second quarter and 69 in Q3 2020. The average value of transactions has been increasing over the past five years.

The biggest transactions during the quarter were:

– 1205 Glancaster Rd., an 89.54-acre piece of ICI land adjacent to the airport that was sold by a private individual for $34.32 million to Broccolini;

– 360 and 410 Lewis Rd. in Stoney Creek, a 205,000-square-foot multi-tenanted industrial flex building sold by a private individual for $34 million to Forge & Foster, which will renovate and restore the exterior, try to lease vacant units, explore converting units to industrial condominiums, and change the name to Orchard Place to pay homage to the fruit farms in the area;

– 449 Mohawk Rd. E., a 9.79-acre retail plaza on Hamilton Mountain sold by Sun Life Assurance Company of Canada for $16 million to New Horizon Development Group, which Manojlovich expects will turn it into a residential development; and

– 1 Head St., a 121,900-square-foot industrial building in Dundas sold by Forge & Foster to a private individual.

Hamilton received a Foreign Trade Zone designation a year ago from the federal government. As a result, businesses that import and/or export goods or manufacture products in the city were granted access to direct support on a range of duty deferrals and tax exemptions.

Hamilton’s international airport is one of Canada’s largest for domestic air cargo distribution and has received federal government funding to support its growing importance.

The City of Hamilton’s Airport Employment Growth District is a planned development area of 1,361 acres of employment land bounded by: Garner Road East and Twenty Road West to the north; Upper James Street to the east; Whitechurch Road West to the south; and Fiddler’s Green Road to the west.

“The airport is a big attractor to investors, particularly in the industrial space,” said Manojlovich. “There’s lots of industrial land that’s getting quickly gobbled up by massive players.”

In addition to the properties near the airport noted in the Q3 transactions, there are other major new industrial facilities and proposed developments in the area:

– DHL Express invested $100 million in a 238,000-square-foot facility, which features a fully automated sorting system with the capacity to process 28,000 packages per hour. It opened at the airport in September;

– Fengate Real Estate acquired 75 acres at 3054 Homestead Dr., adjacent to the airport, in the spring. The site needs to undergo rezoning and the plan is to create an industrial business park of roughly one million square feet; and

– Broccolini acquired industrial land at 9451 Dickenson Rd. W., with direct airport frontage, on which it plans to build a million-square-foot facility.

Hamilton’s real estate and development markets have benefited from spillover from Toronto, located 70 kilometres to the east, as both companies and residents look beyond the city borders for availability and affordability reasons.

Hamilton passed the $1-billion mark for building permits in June, the earliest that’s ever happened. The previous earliest month was August 2019. Hamilton has now reached the $1 billion milestone in 11 of the past 12 years.

Major projects proposed, or in the early stages of development, include:

– Vrancor’s proposal for a downtown 30-storey development at 213 King St. W. that would include a 110-suite hotel in the podium and 241 rental units in the tower;

Interest and growth in Hamilton will also be fuelled by improved public transit.

The West Harbour GO Transit station in the north end of downtown now has hourly, all-day train service to and from Toronto’s Union Station. A self-service GO train station is planned for Centennial Parkway North.

A memorandum of understanding was signed in September for Hamilton’s 17-stop light rail transit line to move forward. It should better accommodate future travel demand and encourage the development of mixed-use higher density communities for a population that’s expected to significantly grow.

There are also plans for a bus rapid transit system that would run from Hamilton along Dundas Street through Burlington, Oakville and Mississauga to Etobicoke.

Canadian multires transactions ahead of 2020 pace

Steve McLean Residential Development Ontario Oct. 25 2021
Steve McLean Business reporter
Steve is a veteran writer, reporter, editor and communications specialist whose work has appeared in a wide variety of print and online outlets. He’s the author of the book Hot Canadian Bands and has taught reporting to college students. He is based in Toronto.