REITs come and go. What they rarely, if ever do, is come back around for a second iteration. 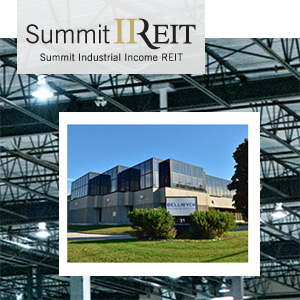 That’s pretty much what Summit Industrial Income REIT (SMU.UN-T) has pulled off. The Brampton, Ont.-based trust has the same management team and the same investment strategy that it had a decade ago when the original Summit grew to become the country’s third-largest REIT (and biggest public industrial property owner) before being taken private by ING Real Estate.

So what’s changed this time around? Well first off, getting information out of Summit beyond bare bones press releases is difficult. Paul Dykeman, who was brought on as chief financial officer of the original Summit in 1998 and is now CEO, has yet to sit down for a media interview.

Last week, however, he did participate at the RealREIT conference in Toronto, and revealed some details of one of Canada’s least reported REITs.

Dykeman was asked what has been different about the launch of ‘Summit two’ versus the original REIT. He answer: more focus and, surprisingly, a similar growth pace despite “frustration” that the trust hasn’t bulked up faster.

The first time around, Summit began as a diversified REIT, buying every type of asset class in many different markets. “There wasn’t as much discipline to the buying program.”

In 1999, ‘Summit One’ purchased Avista REIT and changed its strategy to focus on industrial properties and upped its pace of growth.

The original Summit was also no slouch when it came to providing for investors. “We produced a 20% (per year) for those 10 years of being a public company.”

Not only is ‘Summit Two’ focusing exclusively on industrial properties, it is far more geographically focused, Dykeman said.

“It is primarily GTA, Montreal and just most recently Alberta, and focusing on larger bay industrials. Average tenant size is 50,000 square feet. The first one, we had a lot of tenants and a lot of them were in small markets about 10,000 sq. ft. on average.”

With ‘Summit Two’, Dykeman has also faced challenges that he didn’t encounter the first time around. Many institutional investors are not interested in “small” REITs, those with market capitalization below $250 million, $500 million, even $1 billion, are not attracting the attention of big money investors.

“The other challenge is the inconsistency of the capital markets. We would have liked to have grown significantly in 2013, 2014, but there was the scare of interest rates rising so your price goes down and we didn’t do a lot of acquisitions in that period of time.

“It has been 20 years since we did the original Summit, a lot of real estate has changed hands and I think today there is more real estate owned by very solid groups, whether it is pension funds, pension fund advisors or other REITs so we are not seeing as much liquidity in the market for the quality of the properties that we are looking at.”

The good news is that with four significant industrial REITs out there this time, gone is the necessity of educating investors about the property class.

From the outset, the new Summit Industrial Income REIT has had a Toronto-centric investment strategy, the trust’s CEO said.

“Today’s strategy that we started three years ago was no accident. We saw the GTA as the best value creation part.”

For Summit a key investment metric is price per square foot versus replacement cost. “The GTA by far has the lowest industrial rents in Canada. We have done most of our buying in that $75 to $85 a square foot” which compares favorably to costs of $125 to $130 per sq. ft. to build new.

To that end, cap rates in the GTA for industrial are going down. “Every day we see a new low but there is a lot of competition.

“So our hypothesis that we started with three years ago, I think everyone has caught onto to it.”

Summit is dipping into Montreal as a secondary market as a way to “buy a little bit higher yielding properties in Montreal which allows us to be as competitive as we need to be on the GTA portfolio. And we are also able to do some value add and buy vacant buildings that have good price per square foot.”

In addition, Summit is working with a developer in Montreal to build new industrial in that city.

Summit has also cast its eye to the troubled Alberta market.

“We have seen that as an opportunity. All of a sudden, 5 cap rate properties are starting to move up into the 6, 6.5 (cap rate). So we are buying properties there with low long term risk.”