Alberta’s economy may be down in the dumps, but that combined with recently introduced government policies have contributed to a boom for the province’s craft breweries. 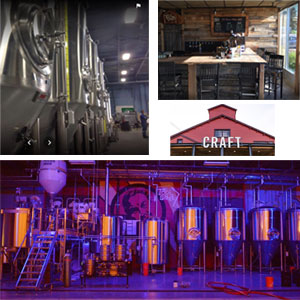 “The elimination of production limits in Alberta is what started the growth of craft beer in Calgary,” said Colliers International Calgary vice-president Michael Massing, who added that Edmonton and smaller towns such as Turner Valley, Cochrane and St. Paul are also benefiting from new legislation that put an end to the minimum production capacity limit of 5,000 hectolitres per year.

As the public’s palate gets more tuned into small batch beers made by craft brewers, there’s been increasing demand for the variety of styles and flavours they’re producing that foreign-owned giants like Molson Coors and Labatt have traditionally ignored. And Calgary seems ripe to cater to drinkers looking for something different.

“With all the money that was here, people were travelling non-stop,” said Benjamin Leon of The Dandy Brewing Company, which has been in business for more than two years and used Colliers’ assistance in finding its brewery location on 25th Avenue NE and negotiating favourable financial terms for its lease. “Now it seems like there’s not as much money for people to travel and they’re focusing more on their own city.

“There are also a lot of out of work engineers and businesspeople who are saying ‘Now’s the time.’ They have a little more time on their hands and breweries are a sweet business to be a part of, so some people are taking the leap.”

Alberta was home to 13 small breweries in early 2013 and that number could reach 40 by the end of this year, according to Leon, who believes this rapid growth will continue through 2017.

This expansion will be aided by a recently rolled out provincial grant program that could see $20 million provided to local brewers producing a yearly maximum of 300,000 hectolitres. This is expected to create jobs and increase investment in Alberta’s liquor sector.

Calgary is also giving the city’s craft brewers more options by introducing a bylaw to relax zoning requirements so they’re no longer limited to light or medium industrial areas. This wider choice of locations and access to consumers and neighbourhoods will give brewers the opportunity for more tours, sampling and general retail, which can significantly boost their revenues and profits.

While Dandy is located in a light industrial-zoned area, it’s as close to a residential neighbourhood as possible and is on a bike path. Leon said breweries of Dandy’s size generally look for 1,500- to 3,000-square-foot properties with a nice space for a small tasting room. Dandy opened its tasting room last November.

Larger craft brewers require up to 20,000 square feet of space. Easy access to distribution routes is important no matter what the size of the operation.

“I don’t see it having a large impact given most breweries are going to be drawn to the light industrial areas, where breweries were already permitted, for cost considerations and functionality,” Massing said of Calgary’s zoning changes. “It will have more of an impact for the smaller brewers and brew pubs.”

Excluding brew pubs, Calgary has 10 craft breweries occupying approximately 300,000 square feet of space. Others are in the planning and set-up stages. Leon said small breweries have to strike a balance between finding easily accessible locations with the higher rents charged in them when seeking an appropriate site to set up shop.

The eastern part of Calgary has the most light and heavy industrial facilities available to accommodate breweries, which generally require: smooth floors with access to drainage; ventilation; sufficient power; two-inch water lines; and upgraded fire walls for locations with tasting rooms or retail areas.

“Retrofitting a property for brewing is very expensive and every dollar counts when starting a new brewery,” said Massing. “Breweries can function in a typical industrial building, but finding the existing infrastructure to save on costs is the difficult part.

“This is where working with an expert that knows what to look for and what to plan for can save a brewery significant time and money.”

Colliers started specializing in breweries after working with several startup and existing companies. The commercial real estate services company recognized the growth in the industry and wanted to be a part of it, according to Massing.

“Working with the brewery entrepreneurs and being part of their success is rewarding and exciting for us. We know the current needs of brewers and advise on planning for the future as well.”