The trend toward multi-level industrial strata development in Metro Vancouver is picking up steam... 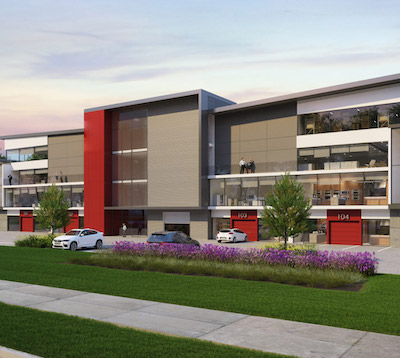 The trend toward multi-level industrial strata development in Metro Vancouver is picking up steam, with two more local builders partnering on the four-storey, 200,000-square-foot Vanguard project in Richmond.

Alliance Partners and Union Allied will construct the facility, which will be the first in Richmond. Several other multi-level industrial projects have been announced across the Metro Vancouver region in response to steady demand, low vacancy rates and severe development land constraints.

“With ongoing low vacancy for industrial spaces in the city, we wanted to provide spaces that serve the growing number of local businesses who struggle with rising lease rates and finding secure, long-term space to grow and expand,” said Alliance Partners CEO Gordon Yeh in a release.

Alliance Partners is a Vancouver-based development firm founded by Yeh. The company also has a six-townhome project called Monogram under development in the Grandview-Woodland area of Metro Vancouver.

Vanguard will launch this week with over 55 per cent of the 65 units already pre-sold to a mix of local, small businesses and investors. The builder say the light industrial strata is needed in an area experiencing growing demand from small- and medium-sized businesses looking to buy their own space.

Alliance and Union Allied say this will be the first new flex industrial space in Richmond in eight years.

The development at Alderbridge Way and Shell Road will provide small-bay industrial and office space to non-traditional industrial users from sectors such as food services, recreation, furniture and home services, and traditional manufacturing and warehousing.

The project is expected to be ready for occupancy in the fall of 2021.

According to Avison Young, lease rates for industrial space have been increasing by about 10 per cent per year for the last four years.

“In a market with a 1.5 per cent vacancy rate, buying makes more sense for a growing number of businesses in the area,” said Kevin Kassautzki, principal at Avison Young, in the release.

“This project fills a demand vacuum as we’ve seen with early pre-sales and it’s an exciting project for Richmond, not only because it shows the demand for light industrial strata, but because it’s a new type of industrial design needed in the area.

“Multi-storey industrial strata has been successful in East Vancouver, but this is the first of its kind in Richmond and it shows how creative developers are getting in catering to demand for industrial spaces.”

About the Richmond site

An outdoor walkway will connect the units. Windows within each unit will allow for large amounts of natural lighting.

Yeh said one important design element at Vanguard is the freight elevators to the second floor which can accommodate cars and vans.

Of the units sold so far, the majority are on the second floor. Businesses include a tiling manufacturer, furniture showroom, a gym and several start-ups.

“One of the things that makes this project unique is that it will become a community of small businesses, with efficiencies and benefits that come from working in proximity and through the architecture,” said Michael Chiang, Union Allied’s CEO, in the release.