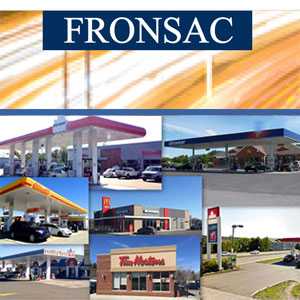 “That money got put to use as quickly as possible,” said chief financial officer Jason Parravano. “We had a closing at the end of July and another closing in mid-August, and we have another closing scheduled in the next couple of weeks.”

One of the properties that Fronsac closed on is a freestanding Mikes restaurant located in the heart of the commercial retail sector in Trois-Rivières, Que. on Boulevard Des Forges. It was purchased from a third party with no previous relationship to Fronsac for $1.025 million in cash.

A second Trois-Rivières property was purchased entirely with cash for $3.225 million from a group of private investors with no previous ties to Fronsac. It’s strategically located right off the Rue Des Prairies exit of Highway 40 and has an Eko service station and Subway restaurant. The Trois-Rivières properties are expected to generate approximately $290,000 in aggregated annual net operating income.

“We have other properties in Trois-Rivières and know it’s doing well, and there’s a lot of commercial and residential development happening there,” said Parravano.

The third property that has yet to close is in Richelieu, Que. and was acquired from a private owner who is retiring. The property is along Highway 10 and includes a Petro-Canada service station and a Subway. Nearby fast food restaurants and a location midway between Montreal and Quebec’s Eastern Townships made the site particularly attractive, according to Parravano.

The price tag was $3.512 million and the property is expected to generate approximately $240,000 in annual net operating income on an annual basis.

Fronsac acquires and owns commercial real estate properties situated along highways or frequently travelled routes that are rented to tenants operating fast food restaurants, convenience stores and gas stations under long-term, triple net leases that are management-free. Most of the suburban Montreal-based trust’s 20 properties are located in Quebec and are completely occupied.

Fronsac is an open-ended trust that trades lightly on the TSX Venture Exchange and has a market cap of approximately $23.8 million. It was formed as a venture capital company by five partners in 2006 and became a REIT five years ago.

“Those are the kind of results that any type of REIT in the world would love to publish,” said Parravano, who added that Fronsac continues to look for new acquisitions to create value for unitholders.