Georgian International is active in the aviation, automotive and real estate industries, and the... 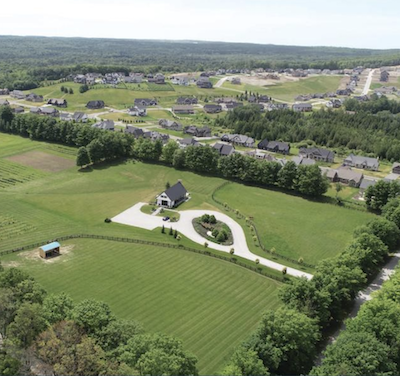 The site of the Braestone community being constructed by Georgian International Land Corp. outside Barrie in Simcoe County, north of Toronto. (Courtesy GILC)

Georgian International is active in the aviation, automotive and real estate industries, and the Barrie-based company is building three major ongoing housing projects in Simcoe County.

“I love where I live,” president, co-founder and co-owner Jamie Massie said of Georgian International Land Corp.’s focus on the region north of Toronto which he calls home. “Canada has been so good to us, and we embody and embrace what it is to be small-town Canada.”

It might be centred in “small-town Canada,” but Georgian International is a significant enterprise.

The company has 400 employees, annual sales of $137 million and is one of the most influential companies in the region.

Massie and his companies are also active in the community. He was instrumental in establishing the Barrie Colts as an Ontario Hockey League team and getting its 4,200-seat arena and events facility (known as Barrie Molson Centre until this year) built in 1995.

“If it affects our community, we’ve been involved,” said Massie.

GILC, which handles its own construction, is now devoting much of its attention to its Braestone, Windfall and Mountain House at Windfall residential communities.

Braestone is a master-planned country estate community located approximately 20 minutes north of Barrie on 566 acres. It was launched in 2014 and named Best New Home Community in Canada in 2016 by the Canadian Home Builders’ Association. 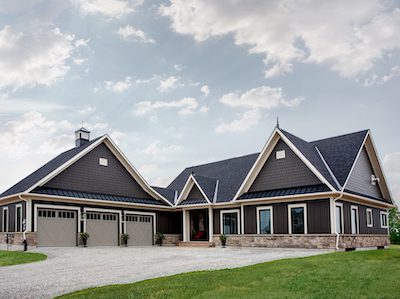 Braestone is being built on a 566-acre site north of Barrie. (Courtesy GILC)

Braestone’s architecture is designed by William Hicks of Hicks Partners and is a modern interpretation of the country-style barns and farmhouses of the Oro-Medonte region. The residences feature dormers, cupolas, wide verandas with gas-fired lanterns and coach houses.

“Our goal was to create a distinctive and timeless architectural style,” said Massie.

Braestone’s first phase of 118 homes is sold and is scheduled to be completed before the end of the year. Sales for the second and final phase of 111 homes is just starting and there have already been several pre-sales. Massie said the goal is to build 30 to 35 homes annually over the next three years for Phase II.

Braestone features a 108-acre farm and nature area with: pumpkin and berry patches; a Christmas tree farm; 15 kilometres of trails; a toboggan hill; a baseball diamond; an apiary; a vineyard; a pond; farm animals; and a sugar shack that annually produces 1,000 litres of maple syrup. That syrup is sold and the profits donated to local hospitals.

“It’s designed to be an active community,” said Massie.

GILC acquired the former Orillia Golf & Country Club, located a mile from Braestone and built in 1972, in 2017. It has been renamed Braestone Club and there are plans to revitalize the course to include a multi-purpose clubhouse and events venue with a restaurant and large deck. It broke ground last month.

Windfall is a residential community on a 148-acre site at the base of Blue Mountain Resort, a ski, recreation and lifestyle complex near Collingwood. It’s within walking distance of Blue Mountain Village’s restaurants and amenities.

More than 230 of the planned 609 single and semi-detached houses have been delivered, and about 100 more have been pre-sold. Massie said about 70 homes are built on the site annually. Prices for the Hicks-designed houses range from the low-$500,000s to the mid-$700,000s.

One-third of Windfall’s land is dedicated to parks, ponds, trails, wildlife and nature preservation areas, and other natural features. The Shed is part-clubhouse and part-recreation centre with a playing field, a large fireplace and a barbecue patio.

Mountain House at Windfall will feature 230 condominium units in 12 two-, three- and four-storey buildings on 10 acres slope-side at Blue Mountain. The first four buildings and 70 units have been delivered and the next four buildings, with 75 units, are under construction.

Phase I sold out and Massie said the second phase is 80 per cent sold.

Mountain House at Windfall will include an amenity area with hot and cold pools, a sauna, a steam room, a fitness room, a lounge area, a large outdoor fireplace and Muskoka chairs facing the mountain. There will also be a trail system and bicycle repair stations.

GILC owns a number of other properties in the area, giving it an extensive future development pipeline. It recently purchased 200 acres 10 minutes outside of Barrie which it hopes to bring online in three years with product similar to Windfall.

Other properties in the Collingwood area are probably five years out from development.

“With things we’re either doing today, or have acquired or are about to acquire, we probably have about a 10-year pipeline,” said Massie.

He said GILC has no plans to look beyond the company’s geographic development comfort zone.

“I’m a great ambassador for Barrie and Simcoe County, and I tell everybody how great a place it is.”