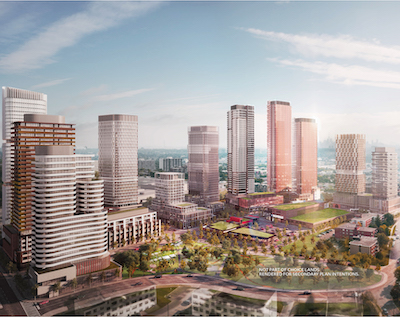 A view of the proposed Toronto Golden Mile redevelopment. Choice Properties REIT and The Daniels Corp. are partners on phase one of the project. (Courtesy Choice, Daniels)

More than four years after Choice Properties Real Estate Investment Trust unveiled a plan to redevelop Scarborough’s 19-acre Golden Mile Shopping Centre, it has revealed its next steps along with partner The Daniels Corporation.

Choice (CHP-UN-T) and Daniels are also partners on Brampton’s Mount Pleasant Village (MPV). With that established relationship, and Daniels’ work in transforming downtown Toronto’s Regent Park neighbourhood with its community-centric approach to its redevelopment, Choice invited the 37-year-old company to be a partner on Golden Mile about 18 months ago.

“We were thrilled to take up that opportunity to really dive into another community that we didn’t know well,” Daniels president and CEO Mitchell Cohen told RENX in an interview. “We needed to get on the ground with our team members and meet people and understand the issues and the challenges and the stakeholders, and understand what their vision was for Golden Mile.”

Phase 1 of the Golden Mile redevelopment

Cohen declined to disclose what Daniels paid for the rights to develop 100 per cent of the two condo towers and partner 50-50 with Choice on the apartment.

“We’re buying the condominium density to develop ourselves and we’re partnering with Choice because Choice wants to have long-term ownership,” he said. “It’s very important for Choice to build value and retain income-producing assets.”

There will be approximately 1,450 residential units in Phase 1, about two-thirds of them condos.

The buildings will be accompanied by a pedestrian mews, four privately owned public spaces, a large public park at the northeast corner of the site and landscaped paths.

Work is still being done to acquire all necessary approvals to begin construction. Groundbreaking is expected in early 2023, consistent with the anticipated opening of the Eglinton Crosstown. Completion is expected in 2026. 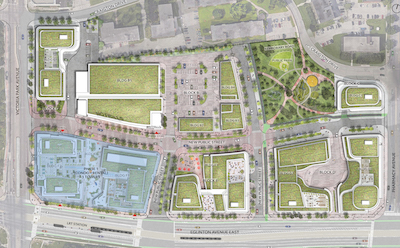 A view of the Toronto Golden Mile site plan. Click the link for a pop-out, expanded view. (Courtesy Choice, Daniels)

Aside from its large size, another differentiator of the first phase of the Golden Mile redevelopment will be the creation of the Golden Mile Community Innovation District. The concept evolved from Choice and Daniels working closely with residents, community organizations, financial and post-secondary educational institutions.

“The aim of the community innovation district is to build healthy, resilient communities by connecting residents with opportunities in a wide spectrum of industry and cultural initiatives,” said Diamond.

“Concrete examples are the potential integration of educational institutions like University of Toronto and Centennial College within the development, and the development of a Comprehensive Workforce Development Strategy to create both jobs and career path opportunities for residents of the Golden Mile.”

The University of Toronto Scarborough (UTSC) will create a college-community-university partnership called the Communiversity to enhance access to post-secondary education, foster co-learning and facilitate sustainable and inclusive communities. The UTSC’s Institute for Globalization, Transnationalism and the Advancement of Resilient and Inclusive Suburbs and Economies will serve as an intellectual hub for inclusive cultural and socio-economic development.

“The whole idea is to break down barriers between the institution of higher education, the ivory tower that’s out there somewhere, and bring that down to the ground into communities,” said Cohen.

The Bank of Montreal will open a 9,000-square-foot flagship branch on the Golden Mile site in Phase 1. Cohen said the bank would work with local residents on financial literacy programs, help support local entrepreneurs and create financial tools to help people gain economic traction as part of a comprehensive workforce development strategy.

“Everybody that is going to be engaged in this whole process of development — from the consultants to the engineers to the financial institutions — is going to be charged with the mission of hiring locally, training people from the local community and creating pathways into careers in construction, architecture, engineering and financial services.”

Cohen said more Community Innovation District partners will be announced in the future.

“We think that this will really kick-start the re-emergence of Scarborough as an economic engine, as a cultural engine and as a place.”

Choice and Daniels are partners on the build-out of Phase 1 and Daniels is providing input on the master plan for the overall site. Cohen said Daniels would like to continue as a full partner with Choice on future phases.

The second phase is expected to include a retail component anchored by a new grocery store.

The overall capital cost of the Golden Mile redevelopment will be approximately $1.5 billion, according to Cohen.

The project is within the 280-acre Greater Golden Mile area, roughly bounded by Victoria Park Avenue to the west, Ashtonbee Road to the north, Birchmount Road to the east and an irregular boundary to the south.

It currently consists of large-format retail buildings and surface parking, with low-rise commercial and industrial buildings to the north and south of Eglinton Avenue East.

The Greater Golden Mile area is expected to become home to 40,000 new residents over the next 20 years.

“We like to start construction first and then go to the market once construction is well underway,” said Cohen. “That way we have a lot more confidence in telling our purchasers that we’re under construction and here’s your closing date.”

Choice owns and manages a portfolio totalling more than 65 million square feet of retail, industrial, office and residential assets across Canada. It benefits from a strategic relationship with retailer Loblaw Companies Limited, which has more than 2,400 stores across Canada.

Daniels has built more than 30,000 new homes and apartments, master-planned mixed-use communities and commercial and retail spaces across the Greater Toronto Area.

It partnered with Toronto Community Housing to revitalize 53 of the 69 acres in Toronto’s Regent Park neighbourhood and is the developer of the TIFF Bell Lightbox/Festival Tower Condominiums project and the City of the Arts community on Toronto’s east waterfront.

Steve McLean Residential Development Toronto / GTA Jan. 21 2020
Steve McLean Business reporter
Steve is a veteran writer, reporter, editor and communications specialist whose work has appeared in a wide variety of print and online outlets. He’s the author of the book Hot Canadian Bands and has taught reporting to college students. He is based in Toronto.