Persistence, apparently, does pay off for Tridel Builders Inc. After three unsuccessful attempts... 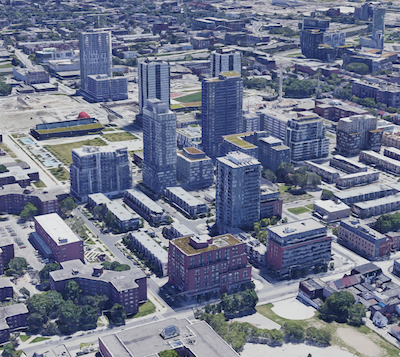 Persistence, apparently, does pay off for Tridel Builders Inc.

After three unsuccessful attempts to become involved in previous phases of the Regent Park redevelopment at the edge of downtown Toronto, Toronto-based Tridel has been selected by Toronto Community Housing Corporation (TCHC) as its development partner for the final two phases of the massive revitalization project.

“We very much look forward to working with the Regent Park community and certainly our partners at Toronto Community Housing Corporation,” said James Ritchie, chief operating officer of the Tridel Group of Companies, during an interview with RENX.

“This is a revitalization community that has been underway for about 15 years. So it’s certainly about renewal – certainly provides an opportunity for new homes for members of the community. But, it also goes beyond that in terms of the community economic development program that we’ll be working with the community in the new year.”

The development is a five-phase, 25-year project to redevelop 28 hectares (69 acres) of land east of downtown Toronto. The site is bordered by River Street, Queen Street East, Gerrard Street and Parliament Street.

All three previous phases of the project have been developed by another Toronto-based builder, Daniels Corporation, which is currently constructing Phase 3.

Phases 4 and 5 will include the revitalization and replacement of TCHC rental homes, new opportunities for market-value condo homes and some public space, said Ritchie.

“We will engage with the community in the new year,” said Ritchie, who expects the development to take about a year. “We’re going to collaborate with Toronto Community Housing and the community before we get to whatever that solution will be.”

Following the community engagement process, TCHC and Tridel will sign a community benefits agreement setting out how the funds will be used. After three years, there will be an opportunity to review the agreement to ensure it still meets the community’s needs.

Tridel was founded in 1934 and is one of the largest condominium development firms in the country. Over the years, it has also built single-family homes and apartment buildings.

“Historically we have built in other parts of the province but we like the GTA in terms of the opportunities and we’ve been very established here in that perspective,” Ritchie said.

“The GTA is the largest housing market in the country and in our particular area of interest, which is higher forms of density, that is the sector that has the most activity. . . .

“We’re a very large, growing population and there’s demand on housing in different types. But, the higher forms of density (are) the most prevalent in the marketplace in terms of demand.”

The switch to Tridel will end a 15-year run for Daniels Corporation at Regent Park, where it is currently building Phase 3.

“The selection of Tridel builds on our success in Regent Park to date and the work already completed by The Daniels Corporation,” said TCHC president and CEO Kevin Marshman in a prepared statement. “We appreciate the significant contributions that Daniels has made during the first three phases.

“Daniels was instrumental in getting the revitalization started and has been a committed partner to TCHC and a staunch supporter of the Regent Park community.”

Mitchell Cohen, president and CEO of The Daniels Corporation, released a separate statement calling Regent Park an example of what can be achieved with such collaboration and partnerships.

“The revitalization didn’t start at City Hall or at Toronto Community Housing. It started in Regent Park, with local voices at the heart of the conversation. Today, more than ever, it is essential that those voices are heard and respected.

“Looking back, we recall the day in February 2006 when the first buildings were demolished, kicking off a truly historic journey,” Cohen wrote.

“At that time, most residents felt considerable anxiety as their homes and histories were obliterated for the promise of a better tomorrow. As the wrecking ball knocked down those first buildings, very few people predicted success.

“Today, the revitalization is celebrated as the gold standard by which a challenged inner city neighbourhood can be transformed. In fact, the Government of Canada and UN Habitat recently announced the Regent Park World Urban Pavilion, situated intentionally in Regent Park, as a model of inclusive urbanism for cities around the world to emulate.”

He said Regent Park is continuing to emerge as a thriving mixed-use community.

“The revitalization has also been a catalyst for inclusive local economic opportunity, with Toronto Employment and Social Services reporting that 580 jobs have been created as a direct result of the revitalization.”

About the Regent Park community

The original Regent Park was built in the 1940s and 1950s as exclusively a social housing district. The revitalization project is transforming it into a mixed-income, mixed-use neighbourhood with rental buildings, market condominium buildings, townhomes, commercial space, community facilities, active parks and open space.

In addition to the community centres and other facilities, new retail and community services spaces have been created along Dundas Street East and Parliament Street.

TCHC is Canada’s largest social housing provider with homes for nearly 60,000 low- and moderate-income households in neighbourhoods across the city. Toronto Community Housing is wholly owned by the City of Toronto and its 2,100 buildings represent a $10-billion public asset.

Don Wilcox Residential Redevelopment Toronto / GTA Dec. 21 2020
M
Mario Toneguzzi Business reporter
Mario Toneguzzi, based in Calgary has 37 years of experience as a daily newspaper writer, columnist and editor. He worked for 35 years at the Calgary Herald covering sports, crime, politics, health, city and breaking news, and business. For 12 years as a business writer, his main beats were commercial and residential real estate, retail, small business and general economic news. He nows works on his own as a freelance writer and consultant in communications and media relations/training.