Oxford Properties Group and CT REIT plan to redevelop the 9.2-acre Canada Square property with a... 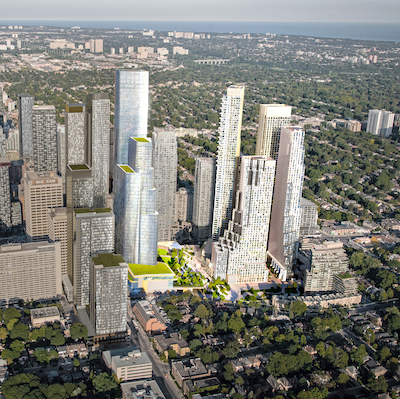 A rendering of the proposed new Canada Square at Yonge and Eglinton in Toronto, which is to be redeveloped by Oxford Properties Group and CT REIT. (Courtesy Oxford)

“This is a site we’ve been looking to redevelop for a few years,” Oxford’s vice-president of development Andrew O’Neil told RENX in an interview. It started working on the redevelopment plan in 2017 and has just filed it with the City of Toronto.

“It’s a unique site. There is a lot of transit infrastructure on the site. So I’d say it’s taken a bit longer than we’d typically see for a site to get to a master plan, but we wanted to be very thorough and thoughtful in our approach.

“We think this is an under-utilized site at a prominent intersection which is a future transit hub for the City of Toronto. We think there is a lot of potential here.”

Although financial details were not disclosed, RENX has learned the project would be valued at about $2.5 billion.

“One of the things we’ve heard, and agree with, is there is a need for a mix of uses on the site. This is a future transit hub, so we think there is going to be a desire by people to work at this location, to live at this location, and there’s also a need for some community space,” O’Neil explained.

He’s particularly proud that about half of the site will become publicly accessible space and parkland. In addition to being much-needed in the rapidly densifying Yonge-Eglinton area, it will improve access for the transit components (subway, a bus terminal and the soon-to-be-completed LRT) as well as the planned retail component at the street and subway levels.

“A big part of our plan is to open up the site. . . . There is a significant open space program to our proposal and that’s really to make the site more accessible to the community,” he said. “Today, the only way to get into the transit stations from outside of the site is through a couple of fairly modest entrances off of Yonge Street.

“In the future there is going to be an LRT entrance off Eglinton, but we wanted to create new pathways through the site, whether it’s north-south, or east-west because access to transit is going to be a key factor in the success of the site.”

The plan envisions three “precincts” to the development.

A mixed-use precinct will anchor the north side of the site featuring a tower that will accommodate 650,000 square feet of office space and over 400 residential units. This precinct will be constructed first once the LRT project completes and approvals are in place – hopefully starting in late 2022.

“The density we’re proposing is a modest increase from what was contemplated,” O’Neil said.  “The site was rezoned by the city back in 2009. At that time they contemplated seven times site coverage.”

Oxford and CT REIT (CRT-UN-T) are seeking approval for an FSI of 7.5, as well as for the actual layout of the proposed buildings.

Phasing the project will make it easier to allow uninterrupted transit access (a requirement for the development) and accommodates tenants in the existing structures on the site. Several smaller buildings are on the property including a mid-rise office tower anchored by Canadian Tire’s head office. It would continue to stand until after the first phase is complete.

Located directly above the Eglinton interchange station for the TTC’s Line 1 subway and Line 5 Eglinton Crosstown LRT, the multi-use first precinct will include transit improvements including a new TTC bus terminal integrated with the existing subway concourse.

A new street-level public plaza will lead from the intersection to a landscaped open space immediately south of the mixed-use tower, a creative use of the bus terminal roof.

A residential precinct at the south side of the site will feature four residential towers including street-related retail and office space for community professional services, such as medical and dental uses, around a central courtyard accessed from a new public street.

Most of the housing planned for the site is anticipated to be rental apartments.

The building heights scale down to the south and west, with terracing to provide height transition to the surrounding residential neighbourhoods. These buildings will overlook new parkland proposed along Duplex Avenue.

O’Neil said there is no firm timeline for the second and third phases.

A new 10,000-square-foot community space is also included in the central precinct, with the potential to accommodate a day care centre, recreation space or other community services.

Established in 1960, Oxford manages approximately $60 billion of assets across the globe on behalf of its co-owners and investment partners. Oxford’s portfolio encompasses office, retail, industrial, hotels and multifamily and spans more than 100 million square feet in  global gateway cities on four continents.

Toronto-headquartered Oxford operates out of over 15 regional offices including New York, London, Luxembourg, Singapore and Sydney.

Oxford is owned by OMERS, the benefit pension plan for Ontario’s municipal employees.

Its portfolio is comprised of over 350 properties totalling approximately 28 million square feet of GLA, consisting primarily of retail properties located across Canada.