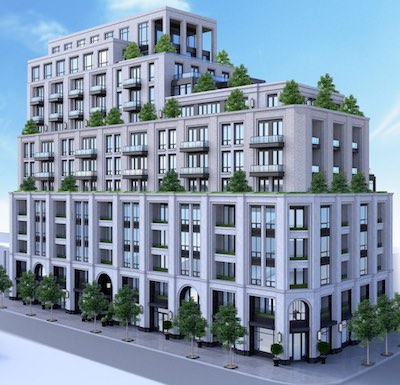 NYX Capital plans to build this mixed-use condo development at a 12-property site it has assembled at Yonge near Lawrence in Toronto. (Courtesy NYX)

NYX Capital Corp. has assembled 12 Toronto properties on Yonge Street near Lawrence Avenue which it plans to transform into a mixed-use condominium development.

“We dealt with nine or 10 different property owners,” NYX founder and chief executive officer Yashar Fatehi told RENX. “It was a very time-consuming and labour-intensive process.”

The assembly at 3180 to 3202 Yonge St. took two years to put together and would have encompassed an entire city block had it not been for one holdout: a TD Bank branch at 3174 Yonge St.

Existing businesses including a yoga studio, a doggy daycare, a framing store, offices and restaurants comprise the assembly. They will provide holding income until the development is launched.

NYX’s plans for the site

The 0.47-acre site will feature retail space at grade topped by a mid-rise condo with 109 units. It was proposed to be 12 storeys and to decrease to nine at its north end to minimize the shadow impact on neighbouring properties.

Fatehi, who was previously managing partner with developer and builder Enirox Group, said 85 per cent of the suites will be “family-oriented” and have two bedrooms or more.

Amenities will include a rooftop where people can socialize and barbecue, green space at the back of building and underground parking.

The site is steps from the Lawrence subway station and a 20-minute commute to downtown. It’s nestled between the affluent neighbourhoods of Lawrence Park and Bedford Park, and near schools, York University’s Glendon Campus, banks, shops and food service options.

Fatehi lives in the neighbourhood and thought the site would be appropriate for development, as he said Lawrence is one of the less intensified subway stations in Toronto due to the fragmented ownership of local businesses.

“As land becomes scarce in Toronto, developers like us are willing to roll up our sleeves and go through a long process to negotiate with different vendors to put something together.”

The assembled properties are zoned commercial residential, but NYX will need approval to build higher than what’s currently there.

Fatehi doesn’t expect that to be an issue because both the city and province are in favour of increased density near major transit hubs. His goal is for construction to start in three years.

NYX is a Toronto-based private equity real estate investment firm with investments in commercial, residential, industrial and self-storage development projects throughout Canada that are currently valued at $620 million.

While COVID-19 has negatively impacted the multifamily real estate market in the Greater Toronto Area (GTA), Fatehi expects that to be in the past a year from now and he’s optimistic about the prospects for the future.

The federal government has targeted 1.2 million immigrants arriving in Canada over the next three years and many of those will settle in the GTA.

“We’ll have high demand, low supply and low interest rates,” said Fatehi. “All of these are ingredients for a great real estate market.”

With high prices and shrinking amounts of land to build new housing, people are living in smaller spaces and need places to store some of their possessions. That’s why NYX has also moved into the self-storage business via a partnership with Bluebird Self Storage.

NYX also owns a 15-acre property with a 193,491-square-foot industrial building at 2365 Dixie Rd. in Mississauga that’s being used as a film studio. Fatehi said there’s huge demand for studio space and he sees it as a potential growth area, along with logistics, for industrial real estate investment.

NYX has received approvals and is going through the site plan application process for the 391,200-square-foot Henderson Townhomes development on a 7.7-acre site at 12 Henderson Ave. in downtown Brampton.

It plans to build mid-rise condos and back-to-back stacked townhomes with a combined 402 units. Construction is expected to start next year.

The company also owns a 4.6-acre site in Mississauga’s Streetsville area. Fatehi said the firm is nearing the end of the approvals process to develop 155 back-to-back stacked townhomes in a project called Tannery Townhomes. Construction is expected to begin in 2022.

NYX is also continuing to develop 2.6 acres of employment land at 2068-2078 South Sheridan Way in Mississauga that it acquired two years ago.

It partnered with Bluebird to demolish two buildings on the property to build and operate a five-storey, 169,000-square-foot self-storage facility consisting of 1,220 climate-controlled units and 26 drive-up units. Construction is anticipated to be complete in the fall of 2021.