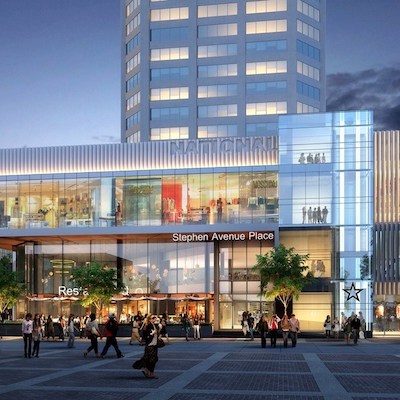 Stephen Avenue Place in Calgary is getting a major makeover from new owner Slate. (Courtesy Slate)

The redevelopment of the landmark downtown Calgary Stephen Avenue Place office tower is starting to pay off for Slate Canadian Real Estate Opportunity Fund I, despite a commercial real estate market that continues to face fierce challenges.

Brett Koroluk, the vice-president of asset management at Slate, said more leasing deals will be announced in the near future.

“We’re working on some stuff right now that I can’t talk about. (Leasing) is about 55 per cent right now,” he said. However, as-yet-unannounced commitments will bring the building to 70 or 75 per cent leased, Koroluk said.

Since the oil price collapse in late 2014, the Calgary downtown office market has faced significant challenges with vacancy rates hovering in the 25 per cent range.

“Golder is a great example because here’s a company that vacated the core 10 years ago. . . . Now they’re deciding to move back downtown and be part of the energy that I personally think you can’t recreate in the suburbs,” said Koroluk.

“I think we’re going to see two things. We’re going to see more Golders of the world – tenants who have vacated the core for whatever reason 10, 12, 13 years ago – that are now returning downtown because we’ve got 11 million square feet of space here.

“I think you’re also going to see, and I have seen it, tenants that have never thought about coming downtown are starting to look at coming downtown. Guys who always kind of just stayed on the perimeter like the Beltline or Kensington, but now they’re saying, ‘Let’s get downtown and be part of everything that’s going on there.’ ”

Golder moved out of the downtown core in October 2008 to a purpose-built, low-rise building off Barlow Trail and Memorial Drive. The company, with about 300 employees, will occupy four floors in Stephen Avenue Place beginning in September.

“Our new Calgary headquarters will allow our people to tap into the energy of downtown Calgary and we are confident setting up a large office in the city centre is also well-aligned with our commitment to sustainability. We moved out of the core some years ago and are thrilled to be back,” said Greg Herasymuik, Golder’s president for Canadian operations, in a news release.

“Our energy and natural resource clients rely on our agility and collaboration in helping them grow their business so we could not be in a better place to serve them. The location, design and amenities are ideal to support our team of creative, innovative and driven people and I am personally excited to be sitting side by side with my colleagues in such a great space.”

Koroluk said renovations at Stephen Avenue Place are scheduled for completion by the end of Q1 2020. They include a club-quality fitness facility, expansive conference centre, tenant lounge, games lounge and more.

Slate has partnered with Oliver & Bonacini Hospitality and Concorde Entertainment Group to create three innovative dining destinations at Stephen Avenue Place: a world-class restaurant on the top floor, an eclectic food hall and a high-energy restaurant, bar and patio on the street level.

“We’re going big on the amenities. We think that’s what companies want nowadays. It’s about more than just housing your operations nowadays. What we’re trying to do is create an environment that helps the Golders of the world, or whatever industry you’re in, attract and retain talent and that really means amenitizing your asset,” said Koroluk.

“In terms of the retail, we’re really trying to sign leases with the right retailers. It’s not just about filling space. It’s taking a look at who is the operator and why we think that would be a better-used operator than another name. So we’re really looking through it with a heavy lens.”

Koroluk said the 8th Avenue and 2nd Street location is the most “energized” corner of downtown Calgary. It might not be centre ice from a business perspective, but in terms of traffic and vibrancy, it’s a hot spot of activity.