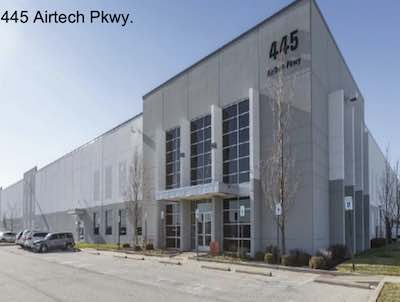 445 Airtech Parkway in Indianapolis is one of eight U.S. industrial properties being acquired by Granite REIT. (Courtesy Granite)

The Toronto-based REIT says the acquisitions represent a going-in weighted average yield of 5.5 per cent. The facilities are fully leased to a diverse range of strong tenants, with a weighted average remaining term of 5.1 years.

“These acquisitions . . . advance our strategy of acquiring and developing modern ecommerce and distribution facilities in Granite’s U.S. target markets,” said Granite president and CEO Kevan Gorrie in a release Tuesday morning. “The properties are exceptionally well-located in their respective markets, with close proximity to critical ecommerce infrastructure.

“Furthermore, the assets are being acquired at a competitive cost basis and provide an opportunity to enhance returns as several leases in the portfolio include below market in-place rents.”

Granite says all the properties are in markets which offer access to more than 50 per cent of the U.S. population within a one-day drive.

The properties are part of two portfolios, one located in the Columbus and Cincinnati metro areas of Ohio and in Indianapolis, the other based in Memphis.

The Memphis properties total about 1.6 million square feet in Tennessee and one property just over the state boundary in Mississippi.

They are located at:

The five Midwest properties total about 2.4 million square feet and are 100 per cent leased to six tenants for a weighted average remaining term of 4.6 years.

The “institutional-quality assets” have minimum 32-foot clear heights with an average age of 10 years. They’re located in established business parks with close proximity to highway and air/rail systems, and benefit from the availability of labour.

Two of the properties are in Cincinnati’s largest industrial submarket, Tri County, close to Cincinnati/Northern Kentucky International Airport, the fastest-growing cargo airport in the U.S.

It serves as courier company DHL’s North American hub and is home to Amazon’s US$1.5 billion Prime Air Hub.

The two Columbus properties are in the southeast Rickenbacker submarket, adjacent to cargo-dedicated Rickenbacker International Airport.

The Indianapolis property is in the Plainfield submarket, which Granite says is the most sought-after in the region. It is within five kilometres of Indianapolis International Airport and the FedEx Air Hub, the second-largest FedEx Hub in the world.

All are near major ecommerce distribution infrastructure, including the Memphis International Airport, the world’s busiest cargo airport; FedEx World Hub, which is currently undergoing a multi-billion expansion; UPS Airport Facility; and the BNSF Memphis Intermodal Facility.

U.S. activity, and financing the assets

All of the acquisitions are subject to customary closing conditions and are expected to close in Q2 2020.

Granite expects to fund the acquisitions using a combination of the net proceeds from its recent equity offering and cash on hand.

In the past month, the REIT has issued a $252-million bought-deal equity offering and a $500-million green bond, the latter through its Granite REIT Holdings Limited Partnership subsidiary.

“Following the acquisitions, the net proceeds from our recent equity offering and green bond offering enable us to maintain our strong balance sheet position with estimated pro forma liquidity of approximately $1.1 billion,” Gorrie said in the release.

The acquisitions are the second major U.S. transactions in the past eight months for Granite, which acquired three properties in Indiana, Georgia and Texas back in October 2019 for $393 million. Those properties comprise about 3.5 million square feet of space.

At the time, Granite also announced the hiring of 19-year industry veteran Jon Sorg to head its growing U.S. operations and established a new office in Dallas.

Granite is engaged in the acquisition, development, ownership and management of logistics, warehouse and industrial properties in North America and Europe.