Graywood to ramp up development in T.O.’s Distillery District

Graywood Developments will launch sales of its latest residential project, The Goode, at 33 Parli... 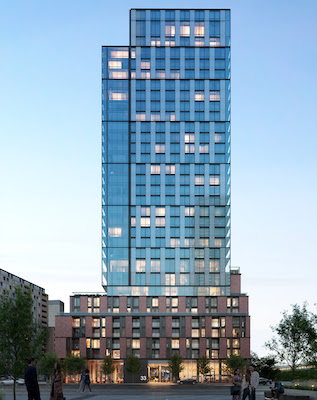 The Goode is a condo development at the edge of Toronto’s Distillery District by Graywood Developments. (Courtesy Graywood)

Graywood Developments will launch sales of its latest residential project, The Goode, at 33 Parliament St. in Toronto’s revitalized The Distillery Historic District in early September.

Graywood purchased two parcels of land immediately adjacent to the Distillery District, in what’s known as the Triangle Lands, four years ago to create the condominium development site. The properties were acquired from numbered corporations and included a doggie daycare, an event space and an automotive rust-proofing business.

“Lanterra is immediately south of us and immediately east of us is Dream and Cityscape,” Graywood chief development officer David Hamilton told RENX. “Those two projects are planning-approved, so between us the three owners are all bringing projects forward in the Triangle Lands.”

The Goode will also be within walking distance of the ongoing Port Lands redevelopment, which will introduce 62 acres of parks, green spaces and a new island to the east end. The proposed Ontario Line subway will have a stop in Corktown, which is less than a five-minute walk from the site.

“It’s embedded into a part of the city that’s experiencing a lot of growth and innovation,” Graywood sales and marketing vice-president Heather Lloyd told RENX. “It’s one of the final parcels within the Distillery District that will be developed as residential, so there’s attractiveness to that.

“We’ve designed the building to complement the area.”

What The Goode offers

The 32-storey, 540-unit The Goode will have a commercial podium and introduce new retail and an expanded Distillery Lane, extending the overall footprint of the popular city amenity that came to life on the eastern edge of downtown in 2003 amidst historic 19th-century buildings.

The condo’s name is a nod to Gooderham & Worts, which was once one of the largest distilleries in the world.

Toronto’s architects-Alliance created the original residential master plan for The Distillery District and is responsible for three of the existing condos. It has returned to lend its vision to The Goode. DesignAgency is overseeing the building’s interior.

Suites at The Goode will range from studios to three-bedroom units, with prices starting in the $400,000s.

The Goode’s amenities will cater to young professionals and families and include a multi-purpose room, a co-working area, a fitness studio, a bicycle repair room, a makers table and a pet wash. A large roof terrace with a swimming pool and rooftop garden will stand atop the 10-storey podium overlooking Distillery Lane.

The L-shaped podium will carve out new publicly accessible space behind The Goode, adding physical connections between the building and The Distillery District.

A deal has been struck between Graywood and partners Cityscape Holdings and Dream, the current owner-operators of The Distillery District, to take over the retail portion of the development.

Construction is expected to start next summer with occupancy anticipated in 2025.

Graywood has several other developments at various stages in its hometown of Toronto.

Graywood acquired a site at 241 Church St., at the northeast corner of Dundas Street East, last year for $73 million. Initial plans called for a 53-storey tower with approximately 570 residential units and service retail at grade.

Hamilton said the company has been working with City of Toronto staff regarding zoning and a site plan application should be submitted next month. It’s hoped the project will be brought to market late in 2022.

The 12-storey, 259-unit SCOUT Condos is more than 85 per cent sold and under construction in the West St. Clair West neigbbourhood.

Wonder Condos is a collection of 286 loft, condo and townhome units under construction on the site of a former Weston Bread factory at 462 Eastern Ave. in Leslieville. The project is being developed with Alterra and occupancy is anticipated in Q4 2022.

Peter & Adelaide, with 695 residences and about 45,000 square feet of retail and office on the first two storeys of the podium in Toronto’s Entertainment District, is under construction. More than 90 per cent of the units are sold and penthouse suites held back from earlier sales will soon be brought to market.

JAC Condos — a 35-storey, 489-unit building at Jarvis and Carlton Streets — is 85 per cent sold. Construction started in the spring on the project, which is a partnership with Phantom Developments.

Graywood also proposes a 15-storey mixed-use project called 506 Church Street that would include 173 condo units and 11,539 square feet of retail and commercial space. Hamilton called it a “work in progress” and said Graywood continues to work with the city’s planning staff on approvals.

Just under 80 per cent of the units in the nine-storey 250 Lawrence condo, just east of Avenue Road in Bedford Park, are sold. Construction has started and Lloyd said what remains are larger end-user units that typically sell later because people want to see construction moving forward before committing.

Graywood sold all 56 townhomes in its Oh! Towns project in Oshawa, just east of Toronto. It will be completely occupied this fall.

The Theodore Condominiums — a 10-storey, 115-unit building at 10th Street and Gladstone Avenue in Calgary’s Kensington community — is 75 per cent sold. Construction is up to the seventh floor.

“The market has really picked up in Calgary so we’re starting to see more local people coming through,” said Lloyd. “A lot of the sales at The Theodore are from Ontario and people investing in the Calgary market.”

Fish Creek Exchange will include townhomes and mid-rise condos as well as new retail, parks and connecting community bike paths on the southern edge of Fish Creek Provincial Park. The second phase, Park South, will include one-, two- and three-bedroom suites.

First & Park Condos is an 18-storey, 213-unit condo located between 1st and 2nd avenues and close to the Bow River, Peace Bridge and Prince’s Island. Sales will launch early this fall.

“There’s an attraction to the ease of purchasing in Calgary and the affordability there as well, compared to Toronto,” said Lloyd. “It opens up another layer for investment.

“Sometimes the Toronto market is out of reach for certain people and Calgary is a major Canadian city that’s often ranked one of the best places to live in the world.”

Hamilton said Graywood is working on a couple of other projects that it isn’t yet publicizing and plans to continue acquiring new sites.

Graywood’s construction arm is building many of its developments, including JAC Condos, 250 Lawrence and Peter & Adelaide. Hamilton said it has $1.2 billion worth of projects under construction and another $1 billion in the pipeline.

“We’re currently not doing third-party construction, but it’s something we’re considering,” he added.

Concert to launch 50-storey condo at Heart of Burquitlam

Steve McLean Residential Transactions Toronto / GTA Aug. 26 2021
Steve McLean Business reporter
Steve is a veteran writer, reporter, editor and communications specialist whose work has appeared in a wide variety of print and online outlets. He’s the author of the book Hot Canadian Bands and has taught reporting to college students. He is based in Toronto.