Chinese mega-developer Greenland Group (Canada) is about to embark on its second major project in...

Chinese mega-developer Greenland Group (Canada) is about to embark on its second major project in downtown Toronto, the 3.85-acre, master-planned Lakeside Residences along the East Bayfront. 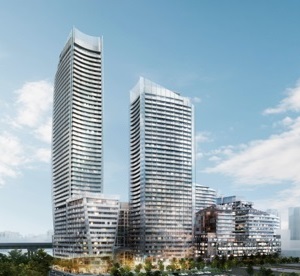 The site, formerly occupied by FedEx Corporation, will be “transformed into a master-planned community with seven towers and upwards of 2,000 new residential units and over 30,000 square feet of retail space,” according to Amanda Ireland, chief operating officer of Milborne Group, which is overseeing marketing and sales of the development at 215 Lake Shore Boulevard East near Lower Sherbourne Street.

“The site is divided into two, so we’re currently launching phase one on the eastern part of the site, which is a 14-storey podium and a 49-storey tower which consists of 772 units. We have another 39-storey tower that will probably be released later next year.”

Greenland is a state-owned company founded in Shanghai in 1992. It has steadily expanded its global operations to 12 cities in nine countries on four continents, including the United States, Australia, the United Kingdom, Germany, Spain, South Korea, Thailand and Malaysia.

Toronto was added to the list in 2014, when Greenland bought King Blue — a mixed-use development at the historic Westinghouse site on Toronto’s King Street West.

“Greenland is really committed to excellence in design and urban place-making,” said Ireland. “They see a future in not just the Toronto market but in Canada in terms of opportunities to create iconic waterfront destinations.”

Its other current developments include: Pacific Park, a 22-acre mixed-use residential community in Brooklyn, N.Y.; Metropolis Los Angeles, a collection of residential towers, skyparks, pools, dining options and an upscale hotel in downtown L.A.; and Greenland Centre Sydney in Australia, which will include a facility featuring spaces for dance, theatre, music, film and the visual arts.

Greenland’s King Blue development in Toronto includes a 122-key luxury boutique hotel, 44- and 48-storey residential high-rise towers, and the revitalization of the highest heritage facade ever retained in Canada. But there’s one key difference between that project and Lakeside Residences.

Greenland took over King Blue while it was already underway, purchasing it from Easton’s Group and Remington Group in 2014.

“With Lakeside, Greenland was excited to pick its own site, pick its own team and build it from the ground up in terms of selecting their best case in terms of their consultants, development team and design team,” said Ireland. “They’re bringing best practices from all around the world.”

Toronto-based Hariri Pontarini Architects was chosen as Lakeside’s master-plan architect after submissions came in from around the world. Its design is meant to link urban life to Lake Ontario while creating a mid-block connection to the downtown core, financial district and St. Lawrence Market neighbourhood.

“The architecture is very bold for the location,” said Ireland. “The 49-storey building sort of flares out and mimics a sail in the wind.”

Interior design team Cecconi Simone is overseeing the suites and amenities within the building.

“Although we have very striking architecture on the outside, the building really was designed from the inside out,” said Ireland. “Special consideration was paid to the space planning of the suites to deliver very livable units. There’s no wasted space inside.”

Units in the 14-storey podium are now on sale. Ireland said demand has been so strong she hopes the majority of the first building will be rolled out before the new year. Construction will likely start in the spring and first occupancy is projected for the spring of 2021.

“We’re infusing some much-needed retail into the neighbourhood,” said Ireland of the project’s non-residential aspect. “But until we’re a little closer to the occupancy date, we’re not sure what the retail will be.”

The transformation of East Bayfront

Waterfront Toronto is overseeing the transformation of the East Bayfront area with investment from all levels of government and the private sector. Just a block away from Lakeside Residences along Lake Shore Boulevard, Canada’s first “smart cities” neighbourhood is being planned by Google sister company Sidewalk Labs.