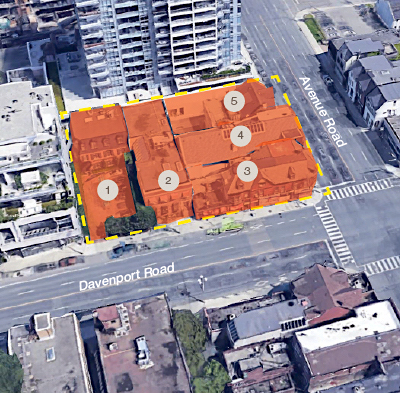 This assembly of five properties at the corner of Avenue and Davenport in Toronto has been acquired by Greybrook Realty Partners and Tribute Communities. (Courtesy Lennard Commercial Realty)

Greybrook Realty Partners and Tribute Communities have acquired an $84-million, five-property assembly just west of Toronto’s Yorkville neighbourhood in a 50-50 partnership for a future development.

“I don’t think we were unique in looking at the site in terms of thinking that could be a great development corner with a beautiful tower there,” Greybrook chief executive officer Peter Politis told RENX. “The complexity was five different owners and five different people wanting different things in different ways, and putting them all together.”

Lennard vice-president of investment sales Noah Schwartz told RENX work began on the assembly at the northwest corner of the intersection in August 2019. The final deal closed on Jan. 18.

– 152 Avenue Rd. is a vacant space formerly occupied by a bicycle shop. It sold for $14 million.

– 224 Davenport Rd. is owned and occupied by Stanley Wagman & Son Antiques. It sold for $17.5 million

– 234 Davenport Rd. is the head office of Gluckstein Design. It sold for $23 million.

“This was obviously purchased purely on development and not on income,” said Schwartz. “There are leasebacks in place to the owner-occupiers, so no one is being shut down.”

Schwartz had previous business relationships with a couple of the owners and leveraged that to connect with the others to assemble the five properties for the off-market transactions.

“Unsurprisingly, they’d all been approached over time by different agents and developers,” said Schwartz. “But, this was the right time and the right set of circumstances for everybody involved, especially for the owner-occupiers.”

While each owner was aware their property was meant to be part of a larger assembly, Schwartz said negotiations for each of them took place separately, confidentially and at approximately the same time so no one knew about another’s terms.

Politis said many of the plans for developing the site haven’t yet been determined, but it’s expected to include a luxury high-rise condominium residence consisting of more than 380 units and more than 6,000 square feet of commercial space at grade.

There will be opportunities to widen sidewalks and “make a better ground realm for everybody” around the site, he added.

All of the properties are already zoned commercial/residential, but municipal approval will be needed to increase the density for the site.

“There aren’t a lot of sites that allow for towers left in this area,” said Politis. “If this isn’t the last one, it’s very close to being the last one that could be assembled for a tower based on zoning.”

The site is in close proximity to four Toronto Transit Commission subway stations as well as shops, restaurants, cafes and amenities in the upscale Yorkville neighbourhood and along Bloor and Yonge Streets.

It’s a short walk from the University of Toronto, Royal Ontario Museum, TELUS Centre for Performance and Learning, a number of galleries and several parks.

The site is one of several in the area Greybrook is actively developing, including:

– The Annex, a condo with more than 150 units that will incorporate more than 350 trees on its balconies, owned in partnership with Cityzen Development Group at Davenport Road and Bedford Road;

– the 29-storey Yorkville at 140 Yorkville Ave., owned in partnership with First Capital REIT, which will have approximately 100 luxury suites and 50,000 square feet of commercial space;

– Yorkville II, a half-acre site at 101 Yorkville Ave. owned in partnership with First Capital that will feature approximately 35,000 square feet of retail space;

– and Scollard, located at 1 Scollard St., owned in partnership with Fernbrook Homes and Cityzen, which will have more than 150 luxury condo units and 21,000 square feet of commercial space.

Politis said Greybrook and Tribute, headed by CEO Steve Libfeld, have partnered on a dozen projects and have a very close relationship that’s expected to continue well into the future.

“Almost any time that either one of us are looking at something that we know the other one will be interested in, we look at it together,” said Politis.

Greybrook is a Toronto-based real estate private equity firm focused on investments in residential development and value-add assets. Through its affiliates, it has invested more than $1.2 billion in more than 80 projects across Canada and the United States.

Its portfolio is expected to result in the development of more than 39 million square feet of residential and commercial density with an estimated completion value of $17 billion.

Pickering-based Tribute is a developer that has built more than 30,000 low-rise and high-rise homes going back more than 35 years.

Steve McLean Commercial Transactions Toronto / GTA Jan. 19 2021
Steve McLean Business reporter
Steve is a veteran writer, reporter, editor and communications specialist whose work has appeared in a wide variety of print and online outlets. He’s the author of the book Hot Canadian Bands and has taught reporting to college students. He is based in Toronto.