The City of Pickering, just east of Toronto, is preparing for massive growth projected during the... 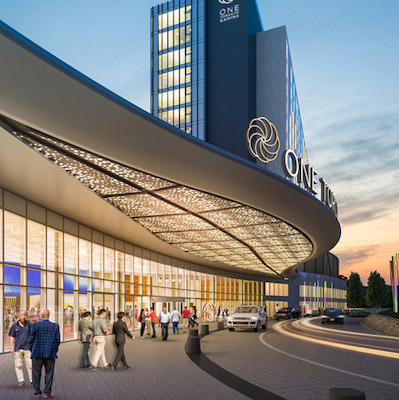 The Casino District, part of the 240-acre Durham Live site, is just one major development being undertaken in the City of Pickering, just east of Toronto. (Rendering courtesy City of Pickering)

The City of Pickering, just east of Toronto, is preparing for massive growth projected during the next 15 to 20 years. Currently a community of 90,000, its population is projected to double during that time.

With the development of a new casino to anchor its mixed-use 240-acre Durham Live district, plans to intensify its core and create a true downtown, as well as several other major projects under construction or in planning stages, it’s a hotbed of activity.

The city was the focus of a recent Urban Land Institute webinar exploring its transformation from a suburban community to a sustainable city. Mayor David Ryan, who has held the post since 2003, opened the proceedings by outlining some of its major projects.

Ryan said the city can assemble teams dedicated to specific development applications and wants partnerships with community members and developers in order for projects to move forward efficiently.

Durham Live, a 240-acre site at the northwest corner of Church and Bayly Streets, is being undertaken by Pickering Developments, part of the Triple Group of Companies.

Durham Live is anchored by The Casino District. The 40-acre site, directly connected to a GO Transit station, will feature more than 330,000 square feet of gaming space, a grand fountain and a hotel with more than 600 rooms.

The casino is built and would be operating if it wasn’t for COVID-19-related shutdowns of gaming establishments.

“We would not support a box in a field, which is what many of the casinos look like as you drive along the 401,” said Ryan, “and that’s not what we’re experiencing in Pickering.”

The Durham Live site is expected to eventually also include a water park, an outdoor amphitheatre, a performance hall, 150,000 square feet of retail space, restaurants, a movie theatre, a golf course and the largest film studio in the Greater Toronto Area.

TriBro Studios’ operations on the west side of the development will cover 15 acres and include: stages; production offices; post-production facilities; workshops; and areas responsible for hair and makeup, props, wardrobe and catering. The studio project is going through the site plan approval process now.

Durham Live will also have a residential component and the final piece of the development will be a large distribution centre on the western edge of the site. Durham Live is expected to create 10,000 wide-ranging jobs.

“It’s important for people to live and work in proximity for a whole number of reasons, with environmental being paramount among them,” said Ryan.

The city and Cushman & Wakefield, the property managers of the Pickering Town Centre, announced a partnership in 2018 that will see the redevelopment of lands on the east side of the mall property and adjacent city lands on the south side of Esplanade South.

“We’ve never had a downtown in Pickering and that’s about to be corrected,” said Ryan. “The area around our municipal complex and the Pickering Town Centre will be transformed.”

There will be a European-style piazza connected to Pickering Town Centre, and retail, hospitality and commercial elements will be part of the development. Groundbreaking for the first buildings is expected in 2022.

The federal government owns approximately 9,000 acres of land immediately north of the Seaton community which was expropriated in the early 1970s to build an international airport. Although it has yet to come to fruition, Ryan is optimistic it will be built.

“The concentration of land, of 9,000 active acres at Brock Road and 407 which is designated for an airport, is unique in the world in terms of being so close to the downtown of a major city,” said van ‘t Hof. “There is a railway tie that goes right beside it and there are highways there. It’s really extraordinary in terms of location, distance and evacuation capacity.”

Studies will be conducted over the next two or three years to try to determine how airports, aircraft and air travel will change, and how the proposed Pickering airport could best position itself for success.

“We must preserve the legal option for those lands to stay as airport option lands,” said van ‘t Hof. “It’s really important to maintain zoning and noise contours such that we don’t sterilize those lands from having inapplicable development around them.”

Jadoon said if the airport is built, it could create an exponential number of spinoff jobs by facilitating further economic growth and activity.

Smart Centres is looking at intensification and mixed-use opportunities throughout its portfolio across Canada. The real estate investment trust has applied to build two condos on its 50-acre site near the intersection of Brock Road and Highway 401 that’s anchored by a Lowe’s and a Walmart.

Bustard said the site is in close proximity to major roads and a GO station, as well as an existing population and amenities, which makes it a prime candidate for mixed-use intensification.

A park and open spaces will be incorporated into the development, which will also create connections with the existing community and enhance pedestrian and bicycling access.

Universal City is a residential project from Chestnut Hill Developments featuring six condo buildings. The first two are above grade in construction and should be occupied in 2021. The first and second towers are sold out, while sales have opened for tower three.

“We’re seeing a shift from single-family units to multiresidential and high-rise throughout the municipality,” said Ryan.

The Pickering Innovation Corridor is comprised of 800 acres of development land along Highway 407 between York-Durham Townline Road and Brock Road that are part of the provincially owned Seaton lands.

Tractor and heavy equipment manufacturer Kubota Canada Limited purchased 50 acres and is building a 500,000-square-foot warehouse and logistics facility and 65,000 square feet of head office space that will be completed next year.

Ryan said the city is working on a number of other opportunities for the Innovation Corridor and expects to make more announcements about them in Q1 2021.

More than 600 acres are still available in the Innovation Corridor, according to Ryan.

A study of Pickering’s Kingston Road corridor has identified opportunities for the redevelopment of what’s now largely a collection of strip malls, larger retail plazas and car dealerships.

“We have an exciting opportunity ahead of us to redevelop and intensify those locations with multiresidential and townhome developments, combined with commercial and retail and park space that will create independent communities and provide services that those residents will require,” said Ryan.

Ryan said an existing Metrolinx rapid transit bus line will be converted to a light rail transit (LRT) line along the Kingston Road corridor from the Rouge River at the western border of Durham Region eastward through to Oshawa.

Construction is expected to start within the next two years and Ryan said Durham Region Transit is working to create north-south bus connections between the LRT line and the GO station.

Pickering was the first municipality in Ontario to create an office of sustainability more than 10 years ago, according to Ryan. It has won national awards for its dedication to demonstrated leadership in conservation, sustainability and engagement.

Ryan said social, economic and environmental lenses need to be applied to all development proposals that come to the city.

“Going forward, when all of our available lands are developed to their potential, the City of Pickering will still have over 50 per cent of its geography either in natural heritage or agriculture.”

VANDYK has big plans for Grand Central Mimico in Toronto

Steve McLean Residential Development Toronto / GTA Jan. 7 2021
Steve McLean Business reporter
Steve is a veteran writer, reporter, editor and communications specialist whose work has appeared in a wide variety of print and online outlets. He’s the author of the book Hot Canadian Bands and has taught reporting to college students. He is based in Toronto.