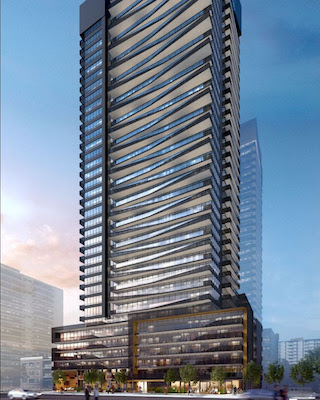 Reserve Properties and Westdale Properties have broken ground on the latest major development near the Yonge Street and Eglinton Avenue East intersection in Toronto, the Line 5 condominiums.

The two Toronto developers have always liked the area, and the ongoing construction of the 19-kilometre Eglinton Crosstown light rail transit line that passes through it has made it even more appealing for intensification.

“It’s not often that you get a neighbourhood that’s already so established, like Yonge and Eglinton, and is receiving such a significant infrastructure investment,” Reserve chief operating officer Shane Fenton told RENX. “Typically you’ll find that in areas that are more up-and-coming.”

Line 5 will have 923 units in IBI Group-designed 36- and 33-storey towers with a shared eight-storey podium at 117-127 Broadway Ave. The biggest number of suites will be variations of one-bedroom units, followed by two-bedroom units, three-bedroom units and studios. Prices ranged from $450,000 to more than $1.5 million and the units are more than 95 per cent sold.

Line 5 sales launched a year before COVID-19 hit and more than 85 per cent of the units were sold pre-pandemic. Fenton expects first occupancy in about three-and-a-half years, with final closing in 48 months.

U31 is the interior designer and Brook McIlroy is the landscape architect for Line 5, which has 34,000 square feet of amenities, including: an outdoor pool; three outdoor lounges; an art studio; a library; an indoor spa; fitness facilities; co-working space; an outdoor theatre; an outdoor game lounge; a social club; a juice and coffee bar; an outdoor yoga and Zen garden; parcel and hot and cold food delivery storage; a dedicated ride share pick-up area; two communal kitchens; pizza ovens; and barbecue areas.

“Everything you could ever dream of in a five-star resort you get to have it in your own personal residence,” said Fenton. “Today, more and more, it’s not just about your own condominium unit, it’s about everything else the community and the building can provide you.”

Reserve is a family-owned company that develops residential, retail and mixed-use properties, including 109OZ, Rise and Bellefair, as well as spaces for Starbucks, LCBO and Shoppers Drug Mart.

Reserve’s executive team has been involved in more than 125 projects encompassing more than 12,500 homes and two million square feet of commercial and retail space across North America.

Westdale is another family-owned company that has owned, managed and developed real estate across North America for more than 60 years.

Reserve has had its office in the Yonge and Eglinton neighbourhood for more than 20 years, while Westdale first invested in the area when it began its 88 On Broadway project in 2005.

“We’ve got a great partnership and a very symbiotic relationship, thought processes and values in how we approach projects and look at things,” Fenton said of Westdale.

“We’ve enjoyed working together and have experienced great success with what we both bring to the table.”

Other Reserve and Westdale projects

The sixth collaboration between the two companies will also involve IBI Group, U31 and Brook McIlroy, with music artist, producer, entrepreneur and designer Pharrell Williams also part of the team.

The site was acquired four years ago from a private group and occupied by low-rise apartment buildings that were to be removed to make room for Untitled.

About 82 per cent of Untitled’s units have been sold after launching a month before COVID-19 impacted the market. Fenton hopes to start construction in the first quarter of 2021.

Reserve and Westdale are collaborating on a 36-storey, 412-unit purpose-built rental apartment at 100 Broadway Ave. that’s in the pre-construction phase. The units will replace those removed to make way for other developments. The building will include retail at grade.

The two companies are also partnering on 2128 Yonge Street Condos, a 13-storey, 79-unit building south of Eglinton near Hillsdale Avenue that’s in the pre-construction phase. Occupancy is expected in 2024.

Fenton said Reserve is also working on a handful of projects in the Toronto downtown core, but they’re not yet ready to disclose any details.

“There’s lots in the pipeline, which is nice, and we believe in the long-term growth of the city.”

Fenton thinks the recent softening of the condo and purpose-built rental markets in downtown Toronto is “a short-term, knee-jerk reaction to the current situation” caused by COVID-19 that has prompted some people to look for larger living spaces farther from the core.

He looks forward to things normalizing again, which will create an appetite for future multifamily developments and a return to full office buildings.

“They love the accessibility, the culture, the public amenities, restaurants, entertainment and being close to work,” said Fenton.

“I believe that, post-COVID, there will be a resurgence back to the urban way of life and urbanization. There’s a reason why cities have succeeded and Toronto has thrived for all these years, and I don’t believe that’s going to change.”

As we head into 2021, a piece is still missing from the housing puzzle

Don Wilcox Residential Transactions Ontario Dec. 23 2020
Steve McLean Business reporter
Steve is a veteran writer, reporter, editor and communications specialist whose work has appeared in a wide variety of print and online outlets. He’s the author of the book Hot Canadian Bands and has taught reporting to college students. He is based in Toronto.