The words “unique” and “rare” appear in a lot of commercial real estate sales pitches. Seldom hav... 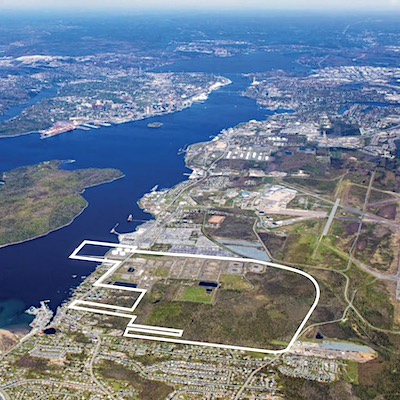 The words “unique” and “rare” appear in a lot of commercial real estate sales pitches. Seldom have they been more appropriate, however, than for Halifax Gate.

The 475-acre site includes a huge parcel of zoned industrial land which could accommodate about 6.5-million square feet of development, an ocean water lot, is near both the TransCanada Highway and a major CN railyard.

It is for sale in a market with a record-low industrial vacancy rate (1.9 per cent) and no large industrial buildings available for rent.

“It’s the first one I’ve seen in my career,” 30-year commercial real estate veteran Robert Mussett, an executive-vice-president with CBRE Atlantic Canada, told RENX. “We’ve never seen anything like this, so it’s unique in a lot of ways, and not only for Halifax.

“Having an industrial parcel of this scale, 475 acres that has a 33-acre water lot attached, that gives you access to one of the best harbours on the eastern seaboard, you have a railhead immediately adjacent to the property, you have TransCanada highway access – it really does check a lot of boxes.”

Mike Częstochowski is a founding member of CBRE’s land services group, and has 38 years in the industry. He echoed Mussett’s comments.

“I’ve never seen a contiguous piece of industrial (like this),” he said. “Forget about the port access, rail, highway, even to find a situation like this where you have a contiguous site that allows for large-scale logistics building, or any other type of employment uses, is really unique.”

Halifax Gate is the former site of a Valero Energy Inc. refinery and petroleum product distribution facility. It sits adjacent to the Canadian Armed Forces air base in Halifax, and a rail port which can facilitate transportation of goods to many major Canadian and U.S. markets in two or three days.

For Montreal-based Valero, the property is redundant. The refinery and distribution centres closed years ago, and the site is now in remediation in preparation for the sale. It is drawing international interest, as word is spread to the global logistics community.

“This has really reached global basis, where we are getting calls from overseas, from companies in Asia, Europe, the States,” Czestochowski said. “We are getting those global players looking at it.”

The property has several components.

“The water lot is what we call, here in Halifax, a pre-Confederation water lot, which means you actually own the bottom of the harbour,” Mussett explained. “There’s a wide range of opportunities as to how that could be developed.”

The ice-free port contains an existing docking facility designed for tanker ships, with water depths of 33 to 47 feet.

The 442 acres of land includes about 100 acres classed as wetlands. A small portion of the site near the oceanfront also still contains a tank farm.

The nearby Port of Halifax is rated as one of the most efficient in the world, No. 25 overall in a 2021 World Bank / IHS report and No. 1 in North America. Its rail connection offers access to markets such as distant as Chicago or Detroit in about three days.

“That’s pretty interesting because what drives the users to come to a port, the shipping lines, is how quickly can we bring a vessel in, how quickly can you guys do what you’ve gotta do, because we’ve gotta get going to the next port of call,” Mussett said.

“Efficiency in that world is huge.

“Then you add CN Rail and their connectivity to the midwest. We can bring product from Antwerp (a major international port in Belgium) or other ports in Europe, land it here and have it in the market in Chicago before the boat lands in New York.”

The land-based development potential would be significant in any Canadian market. But in Halifax, with an industrial inventory of about 12.5 million square feet (and much of that in the city-controlled Burnside Industrial Park), it represents a potential increase of 50 per cent of leasable space. Privately owned leasable space.

“We’ve seen users trying to find the right solution in the existing Burnside inventory and it simply doesn’t exist because it’s not big enough,” Mussett explained. “And, we’ve gone from thinking about square feet to thinking about cubic feet, that’s really important to these types of users.

“When they say they need something 500,000 square feet, it’s also got to be 32- or 36-feet clear height because it’s more about cubes than squares.”

The scale of operations has also rapidly escalated. A decade ago, large users wanted perhaps 250,000 square feet in the market.

“I have no doubt we’ll see the absorption here because (the market) is very bouyant. To have the access to water, rail, highway and the infrastructure that is built into Halifax, and the labour pool, it is so important to these large logistics users.

While the property is currently being actively marketed, there is no timeline set for accepting bids.

“As a broker, I love it when there is only one of something.”

Office vacancy up, but so is demand in Atlantic Canada