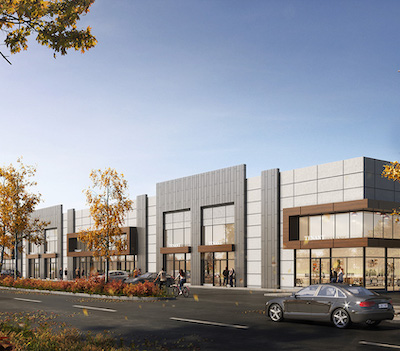 HAVEN Developments and Windsor Private Capital have broken ground on Aurora Mills Business Park, which will offer more than 392,000 square feet of industrial condominium units for sale over seven buildings.

The first phase is underway, with a 90,000-square-foot building divided into 25 units. Unit sizes start at 3,582 square feet but can be combined to accommodate larger-buyer requirements.

“The project was always earmarked for retail and commercial,” HAVEN chief executive officer Paolo Abate told RENX. “With the advent of the pandemic, we shrunk some of the retail to maximize the amount of industrial.

“We decided on an industrial condo for exit purposes because the market was ripe and certainly getting better with what’s happening in the market in terms of higher sales prices. And we also know that individuals want to own their space.”

While Aurora Mills Business Park was originally intended to have 95 units, the combination of multiple units will result in the final number being lower.

They should appeal to small- and medium-sized business owners and entrepreneurs — particularly in the trades, construction and manufacturing sectors — who want more cost certainty as rental rates for Greater Toronto Area (GTA) industrial real estate continue to rapidly escalate.

“We’ve designed them in such a way that they could be used for more commercial purposes,” said Abate. “There’s no reason why a lawyer with a sizeable staff wouldn’t want to locate there and work.”

There are 17 grocery stores and retail outlets, 92 restaurants and 21 banks within a five-kilometre radius of the site.

An off-ramp from nearby Highway 404 that would connect to St. John’s Sideroad is expected to be built at some point in the future, which would make access more convenient.

Site needed to be rezoned

The 50-acre site was acquired almost 10 years ago from a family that lived on it for $8.5 million. It was considered agricultural land until HAVEN had it rezoned.

“Our bench strength at HAVEN is taking projects through the planning process,” said Abate.

“So we revel at the opportunity to take this piece of land from agricultural to commercial/industrial to comply with the official and secondary plans of the area for what’s known as the Aurora 2C lands, which is basically everything east of Leslie.”

The northern part of the site is environmentally protected and has been given to local governments to oversee. Trails will be created on the land to connect to neighbouring trails in the area.

Cushman & Wakefield’s Mike Brown and Pete McGoey are marketing the property and the first phase of units is 80 per cent sold. A broker launch event will be held at Market Brewing Company in Newmarket from 2 to 5 p.m. on June 23.

The first block of units is expected to be delivered in late 2023.

Toronto-based HAVEN selects GTA locations based on access to public transit and infrastructure.

It seeks properties that it can take through the zoning process to add value and prefers sites where it can develop at least 185,000 square feet of gross floor area for mid- or high-rise multiresidential projects.

HAVEN manages its developments from start to finish and invests along with its partners.

“We find it advantageous to mitigate risk as much as possible, not just from a financial perspective but from a development perspective as well,” Abate said of partnerships.

It has experience in real estate, financial services, technology, telecommunications, manufacturing and retail.

HAVEN and Windsor Private Capital started working together midway through the last decade and the relationship has evolved as they have partnered on a few projects, including Aurora Mills Business Park.

“I would call them a financial partner that does have development expertise and is there to be a great sounding board,” said Abate. “They have some decision-making ability along with us, but HAVEN is leading the development.

“Part of the reason that they have been such a great partner for us is they’re not just capital, they’re sophisticated capital with purpose and expertise.”

HAVEN has partnered with Canderel on an 11-storey, boutique luxury residential condo with retail on the ground level that recently started construction at 625 Sheppard Ave. E.

The 11-person company is also looking to develop a three-storey, 18,000-square-foot boutique luxury condo on two lots at 101 Heath St. W. in Toronto’s upscale Deer Park neighbourhood. Objections from neighbours have extended the approvals process, however.

“We believe that we’re not proposing anything audacious,” said Abate. “It’s no higher than the neighbouring house and there’s a condo building of three storeys right next door.”

HAVEN owns land around Weston and Black Creek Roads and the Mount Dennis area of Toronto. It acquired a property in Mount Dennis seven years ago and has since assembled more, with plans to build either a purpose-built rental apartment or condo on a site of more than four acres.

While Aurora Mills Business Park shows that HAVEN remains interested in non-residential developments, it has cooled on retail for the moment.

“I think there’s still some pain in that market,” said Abate. “I think it would be difficult for someone going out and trying to fill a 100,000-square-foot retail site in Aurora or anywhere in the GTA right now.”

Don Wilcox Commercial Development Ontario Jun. 3 2022
Steve McLean Business reporter
Steve is a veteran writer, reporter, editor and communications specialist whose work has appeared in a wide variety of print and online outlets. He’s the author of the book Hot Canadian Bands and has taught reporting to college students. He is based in Toronto.