Vancouver-based Hollyburn Properties has acquired two multi-residential properties in popular Toronto and Calgary neighbourhoods which Industrial Alliance, an insurance and financial services company, had recently put on the market. 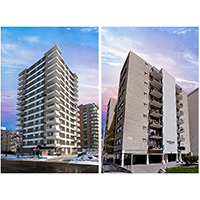 Two multi-res properties on 13 Avenue, S.W., in Calgary, and 38 Lawton Ave. in Toronto, have been sold to Vancouver’s Hollyburn Properties.

The properties were sold through a competitive bidding process and were open to be purchased either individually or as a package.

Tony Manganiello, a sales representative for capital markets, Cushman & Wakefield, which listed the properties, said Industrial Alliance had owned the rental buildings since the early 1990s. There was very strong interest for both the La Salle Tower in Toronto’s Davisville neighbourhood and Calgary’s Central Towers in the Beltline.

He said the Toronto property sold for $19.1 million while the Calgary building sold for $11.9 million. Bids on the properties closed March 28.

“We had a very, very good response,” said Manganiello, adding there were 18 bids, the majority being for the properties individually. “Very competitive. A lot of parties involved. There was nobody that was what I would call an outlier. Very competitive for pricing.

“It was a fairly quick deal. It was wrapped up within 35 days.”

Manganiello said he was pleased with the interest shown in the properties given the current borrowing conditions.

“There is obviously some concerns among investors that rates are going up. We are able to maintain some fairly good pricing,” he said.

Hollyburn declined to comment on the purchase. On its website, the company said said: “We’re excited to announce our newest acquisitions in Calgary and Toronto. Like the majority of our portfolio across the country, Hollyburn invests in prestigious locations that offer residents plenty of high end amenities and services.”

The company is a Canadian-owned and operated rental property provider with properties in what it bills as the most prestigious neighbourhoods in Vancouver, Calgary, Toronto and Ottawa. Its portfolio includes 85 “premier” properties across the country.

Manganiello described Hollyburn as a “very reputable” company and “one of the most regarded landlords, certainly in Vancouver.”

“Lot of background. Lot of experience. They have a very nice portfolio of very nice buildings here in Toronto and in Vancouver as well,” he said. “Hollyburn’s model is they provide high-quality accommodations to a tenant base that typically rents in those neighbourhoods (similar to the Calgary and Toronto acquisitions).”

Central Tower is located at 535 13th Ave. S.W. in Calgary’s Connaught district in the Beltline, just outside the downtown core. It is a 58-unit building offering one- and two-bedroom apartments. Cushman & Wakefield said it has a  mix of 29 one-bedroom units and 29 two-bedroom units.

It’s also located in close proximity to vibrant high streets Stephen Avenue, 17th Avenue S.W. and 4th Street S.W. as well as the public transit system. The building was constructed circa 1967 as a condominium.

La Salle Tower is a 48-unit building offering one- and two-bedroom units at 135 Lawton Blvd. in the Yonge and St. Clair area. It was constructed circa 1961. Cushman & Wakefield said it is a well-maintained and professionally managed building with excellent value add-on opportunity and current rents below market average.

It described it as an exceptional location with redevelopment potential and within walking distance of the TTC Subway.

In a previous RENX story, Manganiello said Industrial Alliance was likely just re-arranging its portfolio when it put the properties on the market.

“A lot of times institutions just look at what they have in terms of their portfolio and eventually they figure . . . the life cycle of the investment’s time has come and eventually they move assets,” he said. “I believe these are the only two residential assets in their portfolio and my understanding is they’re not really big players on the residential side of real estate. They tend to focus more on retail and office.”