Investment activity in Canadian hotels took a major dip in 2018, but it was not due to a lack of... 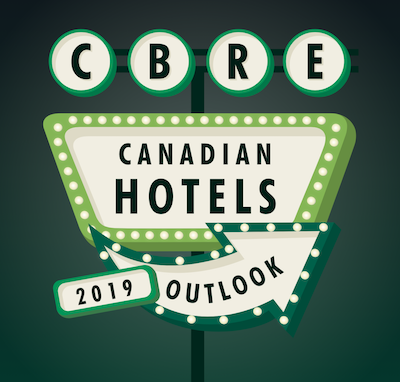 Investment activity in Canadian hotels took a major dip in 2018, but it was not due to a lack of demand. CBRE’s Canadian Hotels Outlook 2019 report cites a lack of available product as the industry experiences a near-nation-wide boom in occupancy, revenues and the values of assets.

“The hotel industry in Canada is performing at all-time highs, with record occupancy, average daily rates and RevPAR, as well as bottom-line performance,” said David Larone, CBRE’s senior managing director for hotels, in a statement accompanying the report. “Our hotels are full, and we are in good shape to continue to grow top and bottom lines in 2019.”

The report is being circulated today in Toronto at the Canadian Hotel Investment Conference. Industry executives and investors will hear occupancy hit a record of 66 per cent during 2018. Revenue per available room (REVPAR) also experienced healthy gains for the second straight year, from $102 in 2017 to $107 in 2018. It is projected to hit $112 this year.

That strength is part of the reason investment in the sector dropped from $3.4 billion in 2017 to $1.5 billion last year.

“Canadian hotel operating performance and investment metrics have never been stronger, and all indications point to investment volume matching if not exceeding historical averages in 2019,” said Bill Stone, the executive vice- president for CBRE hotels, in comments accompanying the report.

“The only factors that cause significant shifts in the hotel market are either geopolitical events — such as 9/11 and the global financial crisis — or the delivery of new hotel supply, which is what we are predicting we will see this year.

“New supply is a good challenge to have as it reflects the strength of the market and Canada’s ability to compete on the world stage.”

In fact, CBRE predicts room supply will grow two per cent across the country during 2019, the largest increase since the economic downturn in 2008.

“This will be driven by owners who are flush with capital pursuing new-build development opportunities in the suburbs of Canada’s largest cities, where land acquisition and development costs remain reasonable,” the report says.

Delivery of the new rooms has already begun, with Hilton recently opening a dual-branded Homewood Suites and Garden Inn in downtown Ottawa (346 rooms), the 390-room Residence Inn Downtown Calgary opening its doors and the 154-room FairField by Marriott Hotel in downtown Montreal also doing so.

Toronto, Halifax and Edmonton are all due to have major new hotels open during the next few months.

Even with this predicted influx of rooms, demand is expected to outstrip the growth for the third straight year. Room demand has grown by 6.5 per cent during the past two years, and is projected to increase an additional 2.2 per cent in 2019.

So, why the decline in investment? CBRE says owners have not been selling their properties – though that might be about to change, at least somewhat.

“With hotels in most major markets reporting at or near peak occupancy and rising ADR and profit levels, many owners are taking a wait-and-see approach to asset disposition reducing the availability of product on the market. Yet they have capital to deploy and are actively looking for opportunities,” the report states.

“The combination of limited availability of product for sale and significant capital to deploy is having upward pressure on prices.

“Even if you could find product, why buy old when you can buy new, especially as hotel pricing is nearing replacement cost in many markets?”

With several hotels and portfolios currently on the market, however, CBRE predicts 2019 hotel investment volume will increase and surpass the 10-year average of $1.8 billion. Both domestic and foreign investors — seeking a safe haven amid global economic uncertainty — continue to show strong interest in Canadian hotels.