A two-building infill industrial development on a 15.45-acre site owned by H&R REIT and Tribal Pa... 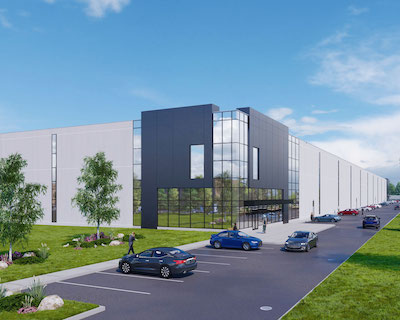 H&R REIT and Tribal Partners are planning a two-building industrial development in the Meadowvale community in Mississauga. (Courtesy Cushman & Wakefield)

A two-building infill industrial development on a 15.45-acre site owned by H&R REIT and Tribal Partners in the Meadowvale area of Mississauga is expected to attract plenty of interest.

The greenfield site was severed from the former 60-acre head office campus of the GSK pharmaceutical company, which is now owned by Bora Pharmaceuticals. H&R (HR-UN-T) and Tribal acquired the property through a competitive process and have had it under contract since October 2018. They closed on it in July 2020 upon achieving severance.

“This was an excess 15 acres at the south end of the site,” said Cushman & Wakefield vice-president Michael Yull in a conference call with Cushman & Wakefield senior VP Fraser Plant and RENX. “They realized they weren’t going to use the excess land and wanted to monetize it since industrial land was becoming quite valuable.”

Site plan approval is expected before the end of the year and occupancy is being targeted for the first quarter of 2023.

The larger Building A will be 185,508 square feet. It will have 37 truck-level docking doors and 142 parking spaces.

“As we get further into the construction process and people see activity on the site, there’s going to be a lot of interest,” said Yull. “We’ve seen interest from distribution companies and life sciences groups.”

Plant said the ownership group would prefer to have single tenants in both buildings, but the smaller one could accommodate two businesses and the larger one could handle up to three.

“We think both buildings will be leased prior to substantial completion,” said Yull. “By this time next year I wouldn’t be surprised if both buildings had been spoken for.”

All new speculative industrial buildings in the area are pre-leased prior to substantial completion, according to Plant.

“The vacancy rate for class-A space is under one per cent and tenants are aware that they have to be proactive to get new construction opportunities.”

Industrial building owners are reluctant to lease too early, however. Since rents are increasing so rapidly, they’re concerned about leaving money on the table by finalizing deals too far in advance of delivery.

“Meadowvale is known for being home to many pharma companies and is the head office location for many corporations,” said Yull. “We think presenting two new buildings, one of 150,000 and one of 185,000 square feet, is really a unique offering for the Meadowvale market.”

The site is located just a few hundred meters from both Highway 401 and Highway 407, and 18 kilometres from Toronto Pearson International Airport.

There are 600,000 residents within 10 kilometres of the site, so a large labour force will be available. The Meadowvale GO Transit station is two kilometres away and six public transit routes are within three kilometres. There are 46 restaurants, three banks and four hotels within that same three-kilometre radius.

Orlando’s 500-acre Churchill Business Community business park is northwest of the site and offers office space and distribution, warehousing and manufacturing facilities. Amazon, Thomas, Large & Singer and Canada Logistics are among the tenants.

Toronto-headquartered H&R is one of Canada’s largest real estate investment trusts, with total assets of approximately $13.1 billion as of June 30.

It has ownership interests in a North American portfolio of office, retail, industrial and residential properties comprising more than 40 million square feet.

It partners with private and institutional investors and develops industrial, office, retail and mixed-use properties in Canada and the U.S.

Danny Kucharsky Commercial Market Trends Greater Montreal Oct. 12 2021
Steve McLean Business reporter
Steve is a veteran writer, reporter, editor and communications specialist whose work has appeared in a wide variety of print and online outlets. He’s the author of the book Hot Canadian Bands and has taught reporting to college students. He is based in Toronto.