With the summer doldrums behind us, the major lease signing announcements are rolling in. HSBC Bank Canada announced Wednesday morning it will be one of the principal tenants at Cadillac Fairview’s new 16 York Street office building in Toronto. 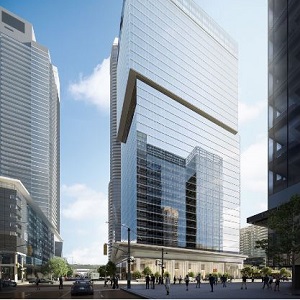 HSBC and CF said the long-term lease agreement means the financial institution will move its Toronto corporate office to the new, south financial core tower in October 2021. It will occupy 115,189 square feet on six floors in the 32-storey building, including 5,200 square feet of retail space facing York Street.

“This is an exciting milestone in HSBC’s evolution in Canada,” said Sandra Stuart, president and CEO of HSBC Bank Canada, in a statement announcing the lease. “As we continue to invest and grow, it’s important that our staff and customers have a modern, welcoming and well-located space to call home. This new building provides all of this and more.

“It also brings more of our Greater Toronto Area employees together in a single space, enabling even more collaboration as we write the next chapter for our business, our people and their careers in the country’s financial centre.”

HSBC has more than 5,600 employees in Canada, including 1,500 in Toronto. With its national head office in Vancouver, the bank established its Eastern Canada corporate office at 70 York Street in 1989.

It’s the second major Toronto leasing announcement in as many days. On Tuesday, RioCan and Allied REITs announced e-commerce firm Shopify will lease up to 433,000 square feet at their joint venture The Well Tower, which is also currently under construction in the downtown.

The 16 York Street tower is being constructed at the southwest corner of York Street and Bremner Boulevard. When complete, it will have 879,000 square feet of premier office space, three underground parking levels with 289 parking stalls, and ground-level retail space. It is slated to open on June 1, 2020.

16 York Street is being built to LEED platinum specifications and will target WELL certification.

“At Cadillac Fairview, we take great pride in our ability to develop modern office space that delivers on sustainability, connectivity and best-in-class amenities,” said John Sullivan, president and CEO of Cadillac Fairview, in the release. “We are thrilled that our new office tower meets HSBC’s expectations for their growing workforce and look forward to helping them relocate their Toronto corporate office to 16 York Street.”

HSBC will join two other major tenants already confirmed for 16 York: First National Financial and a division of the Ontario Pension Board. During an interview with RENX in June, Sullivan said he expected the building to be more than 50 per cent leased within a short time.

Situated in Toronto’s South Core District and close to Toronto’s waterfront, the location is within three city blocks of Union Station transportation hub, plus retail and other amenities including more than 50 dining establishments. The building will offer an outdoor green space and secure bike parking.

Additional features at 16 York will include:

– a one-acre green roof, elevated 14 metres above street level, serving as a distinctive architectural feature;
– an expansive courtyard adjacent to the building;
– and a connection to the downtown PATH system for pedestrians.

Canada is a priority market for the HSBC Group – one of the world’s largest banking and financial services groups with assets of US$2,607 billion as of June 30. HSBC operates an international network of around 3,800 offices in 66 countries and territories in Europe, Asia, North and Latin America, and the Middle East and North Africa.

Cadillac Fairview is one of the largest owners, operators and developers of best-in-class office, retail and mixed-use properties in North America. The Cadillac Fairview portfolio is owned by the Ontario Teachers’ Pension Plan, a diversified global investor which administers the pensions of more than 323,000 active and retired school teachers.