Hungerford Properties has acquired an empty Calgary building from the Southern Alberta Institute of Technology (SAIT) that it will transform into Mayland Heights Industrial Park. 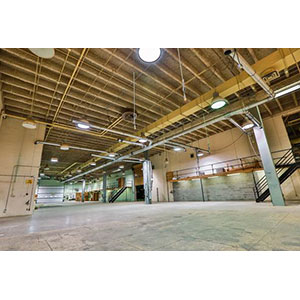 “The building has been on our radar for years,” said Hungerford partner Michael Hungerford. “It’s an extremely well-built building and we always look for good bones when we’re buying property.”

The 109,326-square-foot building was originally constructed in 1966 by the Alberta Liquor Control Board and used as a liquor warehouse and distribution facility. SAIT took the building over and used it for classrooms for about 30 years until it was shuttered two years ago.

The corner property at 2015 Centre Ave. SE is a 10-minute drive from downtown Calgary in an industrial neighbourhood that offers good access to amenities, light rail transit, highways and Calgary International Airport.

The warehouse has 23-foot clear ceilings and eight drive-in doors and two dock doors for loading. There are 180 parking stalls as well as space for trailer parking.

The six-acre property includes 1.9 acres of excess land that can be used for extra storage, parking and, once the main building is leased, additional light industrial development.

Hungerford acquired the property for an undisclosed price and knows the area well since it also owns the Champion Business Centre, a former Sears distribution centre, a few blocks away. The Vancouver-based company also developed the nearby Nexus Business Centre, an office and warehouse condominium project of approximately 100,000 square feet.

JLL is the listing agent and will market Mayland Heights Industrial Park. Hungerford said the company is talking to potential tenants and hopes to announce leasing deals soon. He expects a mix of distribution and light manufacturing tenants to take up spaces ranging from 4,000 square feet and up.

Interior demolition has begun and new electrical and mechanical systems, lighting and dock loading doors will be installed.

“It’s a challenging building once you start walking through it and navigate through a maze of classrooms,” said Hungerford. “Our vision is to take all of those walls down and bring the building back to more or less a shell condition and then build it up again with multiple tenants inside.”

Hungerford will spend a “significant” amount of money on the redevelopment and it’s hoped that the first tenants will be able to move in during the first quarter of next year.

Hungerford has a history of refurbishing and transforming industrial developments in Calgary and across Western Canada. It purchased the old Haworth building in Calgary in 2013 and turned it into the 706,600-square-foot Icon Business Park.

“That’s another example of a vacant building where lots of change was required, and it went through a multi-tenant leasing program,” said Hungerford. “We’ve been able to successfully lease that building up to 80 per cent now.”

Hungerford invests, manages and develops residential, multi-family, industrial, office and retail real estate across Western Canada. The company’s namesake remains confident in the Alberta real estate market despite the downturn in the province’s economy over the past two years.

“We’re long-term investors,” said Hungerford. “Economies and industries move in cycles, and we’ve been around for more than 40 years so we recognize that.”