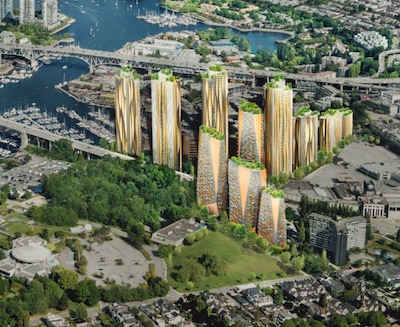 A rendering of the Senakw multi-tower development to be constructed in Metro Vancouver by the Squamish First Nation in partnership with Westbank. (Courtesy Squamish FN, Senakw)

MST Development Corp., an Indigenous-led developer, has six major Metro Vancouver projects in its pipeline — and that’s just the beginning for the new era of economic reconciliation.

The Musqueam, Squamish and Tsleil-Waututh peoples have formed partnerships with developers and government to undertake significant projects that include the Jericho Lands west and east, the Heather Street Lands, the former Liquor Distribution Branch site on East Broadway, the Willingdon Lands in Burnaby, and the Marine Drive Lands in West Vancouver.

The MST partnership is an ambitious undertaking that plans to produce tens of thousands of homes in a region that is one of the fastest-growing in Canada.

Squamish has its own deal with developer Westbank to develop 12 acres of Squamish land, called Senakw.

In May, the band signed a utilities and infrastructure services agreement with the City of Vancouver as a first step toward development of the Senakw site, which is located at the foot of the Burrard Bridge and will deliver more than 6,000 homes, the majority being rental units.

Musqueam partnered with Vancouver International Airport, a 30-year agreement that includes development projects and jobs. Five years ago, Musqueam chose Polygon as the developer for the first phase of a 21-acre residential community at the University of B.C.

The partnerships symbolize a new day compared to the dark past, when it seemed no one wanted to do business with the urban First Nations communities, speakers explained during a recent Greater Vancouver Board of Trade discussion.

“Thirty years ago, nobody really wanted to work with us. No one,” Tsleil-Waututh council member Dennis Thomas told the live and virtual audience during the June event.

The Tsleil-Waututh, who have purchased 54,000 acres of undeveloped Indian River watershed which they intend to protect, had attempted to enter into business partnerships many years ago, he said.

“Now we are on the cusp of having our land acquisitions, our individual nation projects. We are at the cusp of our indigenous economy about to boom.

“This is where we are seeing meaningful partnerships, joint ventures and also inspiring our people, our members to think for the future.”

Its Vancouver projects are major master-planned communities on premium real estate that total 160 acres, centrally located, high-stakes properties valued at more than $1 billion, that are well-suited to significant density.

“Our doors are open for business and we want to introduce a new way of business, building partnerships on that foundation of mutual respect,” said Squamish councillor Wilson Williams.

“I think we are at that road today. I feel that it’s a building phase, but we are definitely provided the space now. We are in the room.”

The first project to be built without a development partner is the five acres at 4165-4195 Marine Dr. in West Vancouver. The three bands entered into a partnership with the federal Canada Lands Company (CLC) eight years ago, before taking full ownership of the site in 2018.

Musqueam councillor Allyson Fraser, who is also on the MST board, said there “have been some difficult discussions” in hammering out agreements as they tried to make their culture and history understood.

The 21-acre Heather Street Lands project, in South Cambie, addresses Indigenous needs for housing as well as non-Indigenous needs, she said. That project is a joint venture with Canada Lands Company, but Fraser said eventually it would also be owned solely by the three First Nations groups.

“We managed to build or envision a project that we feel will work for everyone — not only our people, but the City of Vancouver as well, and addressing the housing needs. We have many people that are on our housing list wanting to come home.

“We are land-poor in Musqueam, and we don’t have reserve lands where we can build enough homes for our people. So working with partners and others to build affordable housing for everyone, it’s a benefit for each and every one of us.

“I think MST’s vision in the future and for the long term is to continue to work as good partners and trying to understand each of our needs and how to move forward in building those projects and building economic development for our people.”