Grosvenor Group has stepped up its game in Metro Vancouver, with a number of projects either comp... 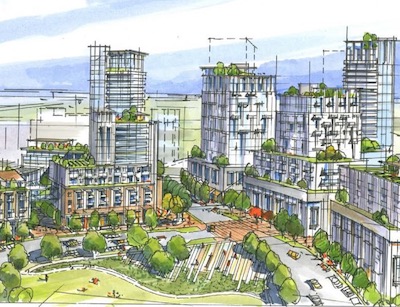 Grosvenor Group has stepped up its game in Metro Vancouver, with a number of projects either completed or in the pipeline, including a master-planned community for Burnaby.

The firm’s focus for the past six months has been the massive mixed-use Brentwood town centre community in Burnaby and the acquisition of the Oakridge OTC site, said senior vice-president and general manager of Grosvenor Vancouver Michael Ward.

However, six months ago, Grosvenor also purchased a townhouse site at Oak Street and West 37th Avenue, within a few hundred feet of the upcoming OTC site.

For a global developer that at one time only had about a dozen projects in the pipeline in cities around North America, it’s a prolific period of development for Vancouver.

Increasingly, the company has been adding residential rental assets to its portfolio, which is part of the plan for the OTC site. Construction is expected to begin in 2025.

“In a way, we have certainly been ramping up our development activity in this market,” said Ward. “A large part of our business is owning and managing property and in Vancouver it’s been very difficult to acquire high-quality multifamily and large-scale multifamily . . .

“So when the opportunity arose for us on this site to feasibly economically build a bunch of rental, both market and non-market, we jumped at the opportunity.”

Grosvenor is a 340-year-old company owned by the Duke of Westminster, Hugh Grosvenor, a young billionaire. His family’s first project outside Britain was in Metro Vancouver, on former farmland on Annacis Island where, in 1953, it delivered Canada’s first industrial park.

Grosvenor has accumulated a large portfolio of leasehold properties and maintains partial ownership of the island today.

The company continued to quietly build commercial projects around the Metro Vancouver region over the decades and then stepped up residential development in recent years.

Grosvenor Ambleside, a mixed-use condo building designed by well-known architect James Cheng and featuring artwork by Gordon Smith and Doug Coupland, is a full-block land assembly that completed a couple of years ago. Ward said that’s pretty much fully leased and sold.

So too is the Connaught, another mixed-use development at Edgemont Village in North Vancouver. The 82 condos and townhomes are sold, and ground-level retail leased.

Only the 40-storey Pacific in downtown Vancouver — which has just started to slowly pick up again — has units available, with about 85 per cent of the building sold. Prices are at $2,000 per square foot, which is about the same price as five years ago, when the project was announced.

Most units sold as presales prior to the pandemic and construction had also started, so the company acted quickly, ordering materials and storing them to ensure they could complete on schedule, by the summer of 2021. That foresight worked and the deadline was met.

Still, the downtown had slowed considerably the past few years and developers are particularly careful about launching projects in an uncertain market. There are many high-end residential towers underway in the downtown core.

“Like any time, we are certainly careful to watch absorption levels and price points,” Ward said. “With a measured approach to buildings being brought out, there is probably enough demand to take up the units. But you certainly wouldn’t want to see them all come out at the same time.”

Prices at the Pacific, he said, have held steady, “within about five per cent, sometimes up, sometimes down,” on standing inventory.

“But that’s the only inventory that we have of the last four or five projects that we’ve built in the last couple of years here.”

The Brentwood master-planned community is another major undertaking, about a year away from construction.

That project will include about 1,000 condo units and 2,500 rental units. Of the rental portion, about 500 will be non-market. It is the most non-market rental Grosvenor has delivered in one location, said Ward.

“We have gone far above and beyond what the base requirement for rental was,” Ward said. “Roughly 20 per cent of the site for these types of projects in Burnaby needs to be rental and we are up around 60 or 65 per cent, because Grosvenor has a different approach to building and owning property.

“We have a long-term view, a long-term vision and long-term commitment to this market and we would hope to own those buildings beyond the construction period, not just looking to get in and build condos and move onto the next one. We are planning our ownership in that neighbourhood for decades to come.”

Grosvenor also has its own climate leadership mandate, including a net-zero operational carbon goal for all of its buildings. Buildings will also be designed to last 100 years and zero-emission vehicle parking and charging will be part of the master plan.

Grosvenor will also deliver about 300 to 400 non-market units at the 14-acre Oakridge Transit Centre site on West 41st Avenue, which will have about 1,630 units in total.

“But that couldn’t be further from the truth. If you look at the developments we have done here in Vancouver, they all have a partner, and that’s Grosvenor’s business model, is to work alongside our capital partners, with Grosvenor acting as development manager on the project.

“It’s part of our business so we can leverage the capital that we do have and do as much as we possibly can in the cities that we operate.”

Kerry Gold has spent more than a decade as a full-time freelancer, writing a weekly real estate and housing column for the Globe and Mail. She also writes investigative pieces for the Walrus, and has written for many other publications, including MSN, Yahoo, Maclean's, MoneySense, BC Business, the Toronto Star, L.A. Weekly and Variety. She spent the first decade of her career at the Vancouver Sun as a music critic and reporter. She also writes books on business, music and food.