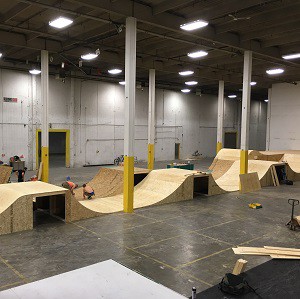 This type of indoor sports facility is starting to pop up in many Canadian cities and the B-Line park is a good example of this growing commercial sector.

Hungerford Properties partner Michael Hungerford says a population of a million-plus creates a critical mass where the economics work for such developments. And millennials are inclined to use these types of facilities, the Vancouver-based property executive says.

B-Line is the third recreational tenant in a 250,000-square-foot building that started its life as Sears distribution centre. The building also houses Calgary Central Sportsplex which provides facilities for soccer, baseball and parkour, and a badminton group’s space.

Other tenants in the building include a coffee distributor with a front showroom, a CDI College and a more conventional warehouse tenant.

Hungerford Properties owns and manages real estate in seven Western Canadian cities from Winnipeg to Vancouver. The company has a long record of urban infill, adapting building use as the city changes, says Hungerford.

In the case of the Champion Business Centre the firm was able to negotiate a change in zoning with the City of Calgary, from industrial general to industrial commercial. This allows for uses other than warehousing, logistics and distribution.

“I would applaud the City of Calgary for working with landowners like ourselves to adapt zoning in a difficult market,” he says.

The building, on the outskirts of the city when it was first built in the 1970s, is now far more central. There is a good population in the vicinity and a C-Train station only a block-and-a-half away.

Several factors came together to allow for the bike park usage in the Hungerford building.

“It’s a large, single-use building that was broken up into smaller portions,” Haney says. “This was the remaining 60,000 square feet in the building and they were able to utilize some things like indoor truck loading courts, built for 30-foot trailers, that don’t work very well for 50-foot trailers.

“The bike guys were able to utilize that for different things they were going to do with ramps, so it’s a bit of a retrofit of some of the older spaces.”

“There’s a whack of these types of companies. There’s the trampoline joints; there’s one that’s based off of American Ninja Warriors; there’s badminton groups; there’s indoor go-karts, there’s all of these things you’re seeing in the market. It’s been a real growth opportunity in the Calgary market.”

The sports companies involved are often startups, Haney says, so the finances generally aren’t there for them to purpose-build a facility. Adapting space in an existing building is the current pattern.

Haney says the deal with Greenberg came about thanks to a referral from a client of JLL who owns climbing gyms in the city and is a friend of Greenberg’s.

Greenberg says he doesn’t have a background in startups. His inspiration for B-Line began with building ramps in his yard for his two young daughters.

“I’ve been working the last 12 years at ATB Financial as a banker. I never fell in love with banking. I found something that was more up my alley and I decided to aggressively pursue it,” he says.

Similar parks in other cities

Greenberg rode BMX bikes between the ages of 11 and 17, but changed to rock climbing for recreation as he got older. When his children came along, his interest returned to bicycling because his entire family could enjoy it.

When he decided to look into building a bike park, he began by visiting similar facilities in other cities and asking about their business models. There are indoor parks in cities including Cleveland, Portland and Markham, Ont.

“I would throw out a big thanks to Hungerford. I recognize they’re taking a chance on me,” he says.

Hungerford says he hasn’t had a chance to meet Greenberg, but he’s looking forward to it.

“We come from an athletic family. My father (George Hungerford) was an Olympic gold medallist in rowing. He won that medal in Tokyo in ’64. We, as a family, are very supportive of sports in general so it’s nice to do that (support B-Line). . . . If we can help his dreams be realized that’s a feel-good story for our company.”