Investments lift Square One past $1B in retail sales

Major renovations and an effort to revamp its tenant base during the past couple of years has made Mississauga’s Square One just the second shopping centre in Canada to surpass $1 billion in annual retail sales. 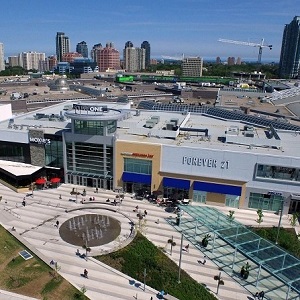 Square One, owned by Oxford Properties and Alberta Investment Management Corporation (AIMCo), announced in a release it hit the milestone during the May 2016 to May 2017 period.

Nearby Yorkdale was the first Canadian shopping centre to break through the plateau, in 2013.

“This incredible sales milestone echoes our mission to create a connected and thriving city centre that inspires our community, maximizes the infinite opportunities of our city and resonates beyond our boundaries,” Greg Taylor, Square One’s director and general manager, said in a release.  “With unprecedented redevelopment, along with the arrival of highly coveted brands to Square One, we will continue to be a passionate and genuine partner in creating and driving positive growth and development in Mississauga’s downtown core.

“This milestone heralds a new era for Square One as a world-class destination for fashion, lifestyle and entertainment.”

The May-to-May sales growth follows on the heels of an equally strong 2015, when Square One achieved 10 per cent year-over-year retail sales growth.

Its owners attribute the success to several factors, including the opening of the new 130,000-square-foot Holt Renfrew, and a number of luxury and higher-end retailers such as Salvatore Ferragamo, Rolex at Raffi Jewellers and Ontario’s first La Maison Simons.

Crate and Barrel, Zara and Whole Foods Market are among the other tenants in the 2.2-million-square-foot property.

AIMCo and Oxford told RENX they had spent more than $480 million from 2013-2015 redeveloping the complex. Oxford also manages the shopping centre, which is designated as a tourist centre by the City of Mississauga and attracts more than 24 million visitors annually.

In 2015, Taylor set a goal of $1,050 per square foot in sales once all of Square One’s new retailers had opened. After hitting $975 a foot that year, sales have now reached $1,056 per square foot, the company says, placing it among Canada’s Top 10 most productive shopping centres.

Oxford Properties Group manages more than $40 billion of real estate assets on behalf of its co-owners and investment partners, with a global portfolio spanning over 60 million square feet. It has offices across Canada and in London, Luxembourg, Boston, Washington and New York. Oxford is the global real estate arm of OMERS, the pension plan for Ontario’s municipal employees.

AIMCo is one of Canada’s largest and most diversified institutional investment managers with approximately $90 billion of assets under management. It operates at arms-length from the Government of Alberta and invests globally on behalf of 26 pension, endowment and government funds in the Province of Alberta.