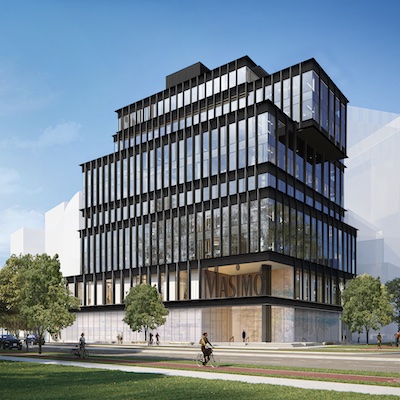 This 10-storey MOB will be developed for Masimo by Keltic Canada Development, just metres away from the new St. Paul Hospital site in Metro Vancouver. (Courtesy Keltic Canada)

The building, to be located at 220 Prior St., will be on the northwest corner of the future St. Paul’s Hospital site. Previously, the site was occupied by a warehouse, built in 1945, which was owned by European Specialty’s Importer Ltd. between 1957 and 2017.

“Our team is thrilled to finally be breaking ground. We are excited to work with Masimo and to be a part of such a positive project for the medical industry in Vancouver,” said Rachel Li Lei, managing director and CEO of Keltic Canada Development.

“It’s a strategic location with proximity and tailored for only medical professionals. . . . Basically the office tenants, or office users, when they walk out of this building, the hospital is just 50 metres away by walk. We chose this location knowing the plan to relocate the hospital.”

Change in plans for Keltic

The development for Masimo, however, represents a change from Keltic’s original plan for the property.

“We thought that building this as a medical-use office would allow a lot of medical practitioners to be very close to the hospital and also allow the patients to have very easy convenience to access all the tests and equipment of the hospital.

“But when Masimo heard about this they approached us saying they had interest in taking over the whole building. After we started to talk to them, we decided to accept their request to do some more amendments exterior-wise and interior layout-wise to suit their one-company use.”

Lei said completion of the building is scheduled for the end of 2024.

The site has an interesting history. Avison Young was involved in the sale of the property to Keltic in 2019 for its development potential at a price of $25 million.

Keltic, in turn, again engaged the real estate firm when it decided to sell the property.

The site was sold to Masimo for an undisclosed amount.

The new building will include a rooftop gym and garden.

“Keltic’s design of medical technology company Masimo’s new facility will be instrumental in initiating the transformation of the area and the new St. Paul’s Hospital campus,” he said.

In a statement, Masimo founder, chairman and CEO Joe Kiani said: “We feel fortunate to be working with the City of Vancouver and Keltic Development for our new Masimo building in Vancouver.

“We admire the city’s focus on fostering innovation and the number of highly skilled engineers and scientists that reside and are studying in British Columbia. Innovation is in our DNA.

“We believe the future of the hospital recovery room is in the home. We look forward to working with our talented Vancouver team to continue to introduce cutting-edge technology in remote monitoring.”

Keltic is a Canadian-owned, diversified real estate development company which was founded in 2017 and is headquartered in Vancouver. Its numerous projects include residential, industrial and mixed-use developments.

The company says it has more than 5.1 million square feet of development currently in planning stages and under construction and calls itself one of the fastest-growing developers in Metro Vancouver.

“Initially we were heavily focused only on residential. . . .

“Our first three projects were all mixed-use residential towers. Ever since then we have started another, which is the medical (with Masimo) and recently we have another one in the south of Vancouver, which is the Marine and Grandview area.

“It’s going to be a 600,000-square-foot industrial warehouse with two or three levels of office on top of the warehouse. That’s our first industrial project,” Lei explained.

“So now we are actually a developer which has projects crossing residential, office/commercial and industrial. Three sectors.”

Some other projects include:

– O2, a 30-storey condo high-rise and four-storey rental building for a total of 338 units in Metrotown;

– Paramount, a mixed-use development in downtown Richmond; and

– Coco, a residential development in Vancouver’s West End in the Oakridge neighbourhood with three-bedroom homes, including three luxury townhomes and six penthouses.

Higher capital costs having an impact

Lecky said the Vancouver real estate market has been affected by recent changes in capital markets. The cost of capital has risen substantially, creating some “choppiness” in the marketplace.

“You’re seeing developers have to go back and revisit their pro forma based on the changing cost of capital, so there’s a bit of transition taking place,” Lecky noted. “It’s going to take probably a couple of quarters to settle.

“That said, Vancouver is a very constrained market for redevelopment land.

“I think this site here is such a rare opportunity to be located in that proximity to the St. Paul’s Hospital medical campus and Keltic had the foresight to see such an opportunity, and I think it’s such a great alignment with an award-winning medical tech company like Masimo who just wants to enhance their footprint in Metro Vancouver.

“It further validates Vancouver as one of the tech hubs in North America.”

Steve McLean Commercial Market Trends National Aug. 31 2022
M
Mario Toneguzzi Business reporter
Mario Toneguzzi, based in Calgary has 37 years of experience as a daily newspaper writer, columnist and editor. He worked for 35 years at the Calgary Herald covering sports, crime, politics, health, city and breaking news, and business. For 12 years as a business writer, his main beats were commercial and residential real estate, retail, small business and general economic news. He nows works on his own as a freelance writer and consultant in communications and media relations/training.