Building boom in Kemptville, Ont., to continue … for years

The community of Kemptville, Ont., is in the midst of a boom that has new residents, and developm...

The community of Kemptville, Ont., is in the midst of a boom that has new residents, and development companies, flocking to the town just south of Ottawa. 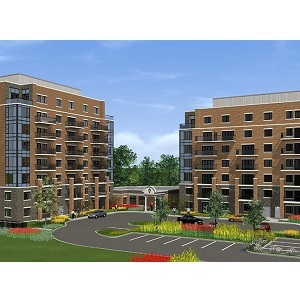 LA Group’s Kemptville Landing luxury condominium complex is the first development of its kind in the community just south of Ottawa. It’s part of steady and accelerating growth in the area. (Image courtesy LA Group)

The area has experienced impressive growth during the past five years, spurred by investments from companies such as Colonnade Bridgeport and LA Group. These firms saw potential in the Township of North Grenville’s largest community years ago and are continuing to lead the charge today.

“[Kemptville’s] population has seen steady growth over the last three census periods and growth rates over the last five years have exceeded both Ottawa and the province,” said North Grenville economic development coordinator Matt Gilmer. He said the township’s population increased almost 10 per cent between 2011 and 2016, bringing it to 16,451 residents.

That growth rate is projected to accelerate during the next decade.

Kemptville’s proximity to Canada’s National Capital Region, easy access via the four-lane Highway 416, lower housing prices (the average house price in Kemptville is $364,200, compared to Ottawa’s $436,600) and quality of life are among its major selling points, Gilmer said.

“It’s not the hustle and bustle that you get in larger cities like Ottawa,” he observed. “But it’s just a quick 30-minute commute there. A lot of people like to work in the city, but come out to the country to enjoy the trails and the waterfront.”

The influx is fuelling a vibrant real estate and building sector, as services and commercial interests arrive to meet the needs of current and future residents. New multi-residential properties and housing communities are under development, more retail is on the way and the town’s institutions are also expanding.

In 2016, 147 new homes were built in Kemptville and projects such as LA Group’s Kemptville Landing are continuing to add to those numbers. Kemptville Landing is a two-building, concrete construction, luxury mid-rise condominium complex just off Prescott Street, a short walk from the town’s traditional business district.

The first building is seven storeys and contains 55 units. Amenities include an on-site fitness centre and heated underground parking garage with storage lockers and a car wash bay. The second building will launch once the first has sold out.

“This is a brand new product to the area and there is definitely a need for it” said Cailie McNeil, marketing services manager for LA Group. “Kemptville is projected to grow by another 15,000 people by 2029, so developers are working hard and fast to be able to support that growth.”

LA Group is well known in Grenville. It was the owner, developer, designer and builder of the successful eQuinelle neighbourhood and golf course before syndicating and selling it. It also developed Kemptville Meadows, a 136-unit condo and apartment community.

Up next will be LA Group’s Oxford Village, a two-phase development in northwest Kemptville with the capacity for 1,300 homes. This neighbourhood is expected feature a mixture of residential types, including townhomes and apartments. It is slated for completion in 2025.

The residential activity is leading to development in other sectors.

Colonnade Bridgeport – an Ottawa-based company formed in 2016 when Colonnade Management and the Bridgeport Group of Companies merged – has become a prominent real estate investor and manager in the area.

It operates the Colonnade Retail Centre near the intersection of County Road 43 and Highway 416, just at the eastern edge of Kemptville. Currently, the retail strip plaza comprises 144,962 square feet of commercial retail units, with anchor tenants including WalMart, Canadian Tire, a Liquor Control Board of Ontario (LCBO) outlet, Staples, Dollarama, Bulk Barn, banks and other services.

Colonnade has just completed a deal to build a 5,900 square foot building, to facilitate doubling the size of the centre’s existing Pet Valu. Anytime Fitness, which is also expanding, will move into Pet Valu’s former unit.

That won’t be the end of the developments. Colonnade Bridgeport still has 12 acres of undeveloped space at the site and is actively pursuing new deals and potential tenants.

“We saw the vision for the Kemptville area 15 years ago. We believed in it then and believe in it strongly now” said Richard Getz, Colonnade Bridgeport’s vice-president of retail. “If you draw a circle from North Gower to the north, Spencerville to the south, Winchester to the east and Merrickville to the west, there’s about 80,000 people in the trade area.

“Those people previously had to go to Brockville or Barrhaven (communities about a half-hour from Kemptville) to shop. Now they have this facility for themselves and it’s been tremendous for the community.”

Another local company, Kevlar Developments, is also active in the community. It is constructing facilities for two new food service franchises, Kentucky Fried Chicken and Starbucks, near the corner of County Road 43 and County Road 19. Both are just metres from the shopping centre along the main access route to Highway 416.

“The nicest part, as a developer, is the success of all of the retailers,” said Getz. “Everyone there has enjoyed tremendous success, in many cases far greater than they had anticipated. In my business, when you hit a home run like that, it makes it great for everybody. The residents embrace these developments and we’ve never looked back.”

Also new is the Kemptville Retirement Living development on County Road 43, as well as plans to double the space in the outpatient services clinic at the Kemptville District Hospital.