There’s still a long way to go before Lakeview Village will start to resemble the vision behind i... 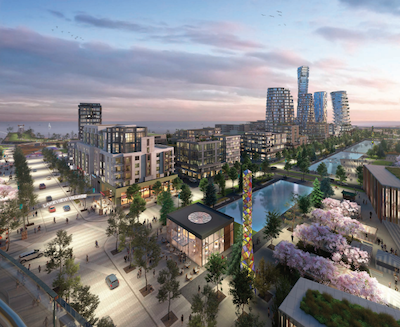 An artist’s rendering of the concept for Mississauga’s Lakeview Village. (Courtesy LCPL)

There’s still a long way to go before Lakeview Village will start to resemble the vision behind it. However, the next step has been taken with the announcement of Sasaki as lead master-plan architect for the $5-billion Mississauga development, which will create a community for upwards of 17,000 people along the Lake Ontario shoreline.

“We realized that what we really need at this stage is a master-plan architect that can look at the whole plan, the relationship of the open space with the building height and density and the waterfront, and bring that all together,” said Lakeview Community Partners Limited (LCPL) and Argo Development Corporation president Fabio Mazzocco.

“Sasaki really showed above and beyond that they were right for the stage that we’re at now.”

Boston-based Sasaki was chosen after a search that included interest from more than 30 local and international architectural firms. It has worked on globally recognized projects, including the Chicago Riverwalk, the 798 Art District in Beijing and the brownfield redevelopment of Las Salinas in Viña del Mar, Chile.

“Lakeview Community Partners is an unprecedented collaboration between five leading community builders who all have various experiences in various disciplines,” said Mazzocco. “Everyone has a role, and it’s a great partnership.”

LCPL acquired the vacant Ontario Power Generation lands for $275 million a year ago in a deal that pledged 67 acres of land to be remediated and transferred to the City of Mississauga for civic uses.

TACC has the lead role in the demolition and materials recycling effort currently going on at the Lakeview Village site.

Lakeview Village will eventually include:

* thousands of residential units to house up to 17,000 people;

* and recreational and cultural space and programming.

It will create as many as 4,500 long-term jobs, while also providing public access to this portion of the Lake Ontario waterfront for the first time in decades.

Mazzocco said Lakeview Village’s residential component will be predominantly comprised of mid-rise buildings, along with townhomes and some taller structures. He expects it to feature some purpose-built rentals, including some designated for affordable housing.

A notable feature of Lakeview Village will be its Serson Innovation Corridor, which will be delivered in partnership with the City of Mississauga and the Province of Ontario. It’s envisioned to be a future employment hub, with a potential mix of office, institutional and educational uses focused on innovative industries.

While LCPL has received interest from potential office and retail tenants, Mazzocco said it’s too early to provide any details.

“We need to do a larger outreach there, particularly for the innovation corridor, because it will be a worldwide opportunity for businesses that want to be in a community on the water and with very sustainable measures in place.”

Lakeview Village will feature a district energy system, which incorporates networks of thermal hot and cold water pipes to heat and cool buildings. The system reduces greenhouse gas emissions and uses less energy than if individual buildings each had their own boilers and chillers.

Energy savings can come from higher overall efficiency, better utilization of waste heat, and by taking advantage of opportunities for cooling by using lake water.

“2018 was the year for us to reveal our master plan and get community engagement going,” said Mazzocco. “We received a lot of great input in an effort to make the plan better and stronger.

“Sasaki was able to take that and implement it into the plan. Some of the refinements that they’re looking to make include strengthening the north-south connection to the waterfront and opening up a space in the central part of the site that brings a north-south green way.”

Mazzocco said other architects will be added to the team for more narrow-focused projects as Lakeview Village moves forward.

LCPL submitted its development application at the end of February. It’s now focused on getting the Lakeview Village master plan endorsed by Mississauga’s city council in the fall and all approvals granted in early 2020. Another community engagement and feedback session will take place in late May or early June.

LCPL’s goal is to start infrastructure construction next year and break ground for buildings in 2021, with first occupancies taking place about two years later.

“There are so many tentacles to this project, with all of the aspects of district energy and the innovation area,” Mazzocco said when asked about the total expected cost of developing Lakeview Village. “It’s much more than just a residential project.

“I’d estimate it to be north of $5 billion for sure on the total build-out cost.”