While logistics companies have become and will continue to be an increasingly important component of the Canadian industrial real estate market, there are still questions regarding how this relationship will evolve. 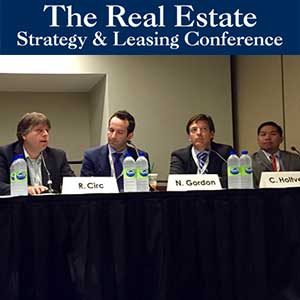 This topic was discussed by five panelists at The Real Estate Strategy & Leasing Conference at the Metro Toronto Convention Centre on Oct. 6.

“We’re not in the logistics business, we’re in real estate development and research to predict what’s going to happen,” said Menkes Developments Ltd. portfolio management director Noah Gordon. “We need to provide well-located, functional real estate to users and let them figure it out.”

CoStar Group industrial research director Rene Circ is based in Chicago, North America’s largest industrial market, and he’s now doing work in Canada. He had an American perspective in describing how e-commerce, technology and logistics have changed.

Large industrial buildings of 500,000 square feet or more are adding specialized technology that’s increasing efficiency and will likely result in fewer people working in them.

Smaller buildings used in the final stage of delivery will be able to remain relatively low-tech truck terminals that don’t have to be specialized but must be well located.

“The goal is to have nothing in them by the end of the day,” said Circ.

Pure Industrial Real Estate Trust eastern Canada leasing director Jonathan Rovira said that 95 per cent of the its tenancies are low-tech and located in urban centres. Most take in product from overseas or Canadian manufacturers and distribute them to retailers, while a couple are used by courier companies to deliver goods directly to consumers.

“We talk a lot about last mile, but it’s a very small proportion of delivery systems right now,” said Rovira.

“It will increase, but I don’t think it will get above 50 per cent. It’s too costly.”

Companies involved in logistics generally don’t want to own buildings since they should be able to get a better return by investing in their businesses, and there are often concerns about built-in obsolescence.

“There may be an opportunity at the end of a lease to move into a new building with a potentially new way to run their business,” said Gordon.

Circ said large warehouses in the United States are going through accelerated obsolescence, as 32-foot clearances aren’t high enough anymore, 36-foot has become a minimum and 40-foot is starting to become the preferred standard. Smaller infill buildings can still get away with 28-foot clearances, but there are more of them than there will be demand for by last mile delivery providers.

While raising warehouse roofs and creating second storey mechanized mezzanines to increase cubic footage is one way of making industrial buildings more efficient, it’s not always cost-effective for owners to do it and they could only service single tenants.

However, if widespread same day delivery becomes economically feasible, density will likely be increased in some markets and developers may be able to knock down an old infill industrial building and replace it with a three-storey structure with 18-foot clearances on each floor. In Canada, this vertical warehousing would make the most sense in Vancouver where industrial land sells for upwards of $1.3 million an acre and is scarce.

While Rovira said there hasn’t been an increase in manufacturers in Pure Industrial’s portfolio, he’s seen growth in existing tenants increasing the services they provide. He cited a food packager for grocery stores that has quadrupled in size in its 24-foot clearance building in Brampton, Ont. because it’s now consolidating services under one roof by also handling fulfillment and distribution.

Tenants now frequently make sizable investments in mechanization systems in buildings and look for contributions from landlords to defray their costs. Healthcare of Ontario Pension Plan senior portfolio manager for real estate Chris Holtved believes there can be value in that because tenants willing to sink large amounts of money into a property are less likely to leave.

“They’re either buying all new mechanization systems and leaving the old one at your building or they’re down for a couple of months,” he said. “I like those odds.”

While Indianapolis has historically been a good American distribution market because of its central location, Circ thinks it will suffer going forward because distributors now want to be even closer to customers to make faster and more efficient deliveries. He said that transportation accounts for 50 per cent of supply chain costs while real estate accounts for five per cent. So if a company can save 10 per cent on transportation, it’s essentially saved all of its rent costs.

Holtved said Pennsylvania’s Lehigh Valley has become a super regional distribution centre even without having major cities near it, and it continues to grow because it can access large northeast and mid-Atlantic markets within a one-day drive.

Less than full truckload hauls are being carried out by certain delivery companies that have a technological infrastructure somewhat like online transportation network company Uber, where drivers who aren’t on the company’s payroll use phone software to find routes where they can pick something else up on the way and increase efficiency.

Having such large logistics and delivery companies as FedEx, United Parcel Service and DHL Express bid against each other for shipments could be the next step.

“Guys who’ve relied on third party shippers have done so pretty loyally for a long period of time,” said Gordon. “Only now have these guys been forced to figure out how to become more competitive.”