When the founders of Montreal urban agricultural pioneer Lufa Farms first approached building owners about renting their roofs to help the company establish a rooftop farm, “everybody thought they were crazy,” recalls public relations and communications manager Simon Garneau. 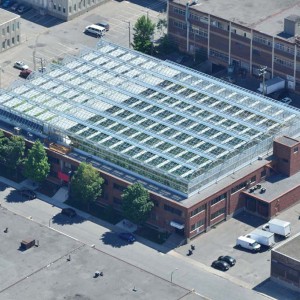 Fortunately, one building owner said yes. So, in 2011 Lufa Farms opened in Montreal what the company says was the world’s first commercial rooftop greenhouse.

Lufa, which operates under the slogan “Our vision is a city of rooftop farms,” recently opened its third and largest hydroponic rooftop greenhouse in the city. The 63,000-square-foot facility on top of an empty warehouse in the borough of Anjou produces more than 40 varieties of vegetables.

“The business model is that we rent the roofs,” says Garneau.

The model benefits everyone because even though the roof is rented for less than interior space, building owners get money from a place they would normally not be able to generate revenue.

In addition, the rooftop greenhouse reduces owners’ heating and cooling costs because it acts as a pad between the heat and cold outside, he says.

Combined, the Lufa Farms facilities have 137,000 square feet of growing space and grow about 75 varieties of fresh vegetables.

Lufa delivers more than 10,000 baskets a week of produce to Montreal-area residents. The greenhouses give residents access to local produce that would otherwise need to be imported from thousands of miles, particularly outside the summer months.

The newest facility – the most automated yet – specializes in leafy greens and produces more than 40 varieties of lettuce, collard greens, kale, radish, broccoli, cauliflower and celery. Prime Minister Justin Trudeau toured the facility in late March.

It was developed with $3 million in debt financing from the union capital development fund Fonds de solidarité FTQ and $500,000 in support from La Financière agricole du Québec. The Quebec government fund supports sustainability in agriculture.

It was designed by Dutch greenhouse innovators Kubo and outfitted by Belgian greenhouse automation experts Hortiplan.

When founders Mohamed Hage and Lauren Rathmell first set out to find space for a greenhouse, they used Google Maps to search for suitable Montreal buildings with flat surfaces and very little rooftop equipment, Garneau says.

At the time, Montreal had no rules for rooftop greenhouses. But after negotiations, the city decided to consider rooftop greenhouses as an extra floor on the building. Lufa now has to meet bylaws for everything from emergency escapes to fireproofing.

“The success of the first greenhouse made things simpler, because the city has now adjusted to the model. There are less hurdles when we want to build on the roof,” Garneau says.

Garneau says now that Lufa Farms is a proven and growing concern, it’s been easier to find space for rooftop rentals.

“It doesn’t sound as crazy to people; it actually makes sense to them now. Why go out of town to grow vegetables when you can use a wasted space that just creates extra heart islands in the city and why make your vegetables travel when they can be near you?”

Subscribers to Lufa pay a minimum weekly price of $15 for produce baskets, which can be customized to include products from more than 200 partner farmers, food artisans and local producers.

“Because we’re hydroponic, we can’t grow root vegetables like potatoes, beets and carrots, so we deal with local organic producers who are in most cases too small to sell to large-scale grocery stores,” he says.

The baskets are delivered to more than 350 pick-up points in the Montreal area, from yoga studios to libraries and daycare centres. For an extra $5 weekly, subscribers can have their baskets delivered to their homes by Lufa’s fleet of electric cars.

Lufa Farms plans to continue the expansion of its urban farm projects in Quebec and in New England.

The vision is “to see cities filled with rooftop farms,” Garneau says. “That’s the future of feeding cities sustainably and more intelligently.”