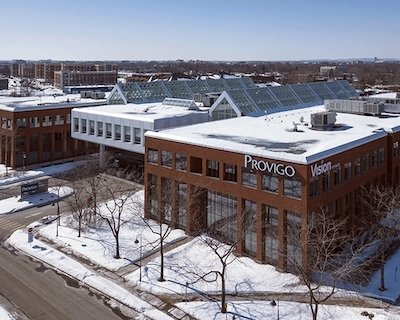 Montreal developer Groupe Mach has spent $33.7 million to purchase 400 Sainte-Croix, the class-A office building that served as the Quebec headquarters of Loblaw in the Montreal borough of Saint-Laurent.

Built in 2000, the 282,644-square-foot, brick-and-glass building comprises three wings of three storeys each, with floor plates ranging from 28,000 square feet to 38,000 square feet. The wings are separated by two atriums that provide natural light.

“We decided to buy the property because we’re bullish on the neighbourhood and it fits our strategy to buy empty buildings below replacement cost,” said Laurent Dionne-Legendre, Groupe Mach lawyer responsible for acquisitions in Quebec.

Groupe paid about  $120 per square foot for the building, and it would be impossible to build a new property at that cost today, he said. A new building of the same size would cost $80 to $90 million to build today.

“It fits our strategy to buy a property and to create value.  It’s a value-add play for us,” Dionne-Legendre said.

“Rents there are affordable (and) it’s a campus-like property with lots of common area. There’s lots of potential for the property just in terms of adding additional leasable areas.”

The building is close to two of Montreal’s major highways, Highways 40 and 15, and is within walking distance to the du Collège Métro station.

400 Sainte-Croix was built by Loblaw as a single-tenant property for the grocer. However, the Loblaw brand never took strong hold in Quebec  and in recent years the grocer has put increased emphasis on its once-neglected Provigo brand.

Loblaw stores have been replaced by Provigo Le Marché stores in the province.

The company lowered its presence in the Quebec head office from the entire building to about 100,000 square feet and then downsized further to 35,000 square feet for the Provigo banner.

Provigo is currently the largest tenant in the building. Other tenants include a tech company, travel company, temporary space for the Red Cross and CBRE’s Saint-Laurent office.

The building has about 120,000 square feet of vacant space.

Loblaw “couldn’t lease the remainder of the property because it’s not their business to lease real estate,” Dionne-Legendre said. 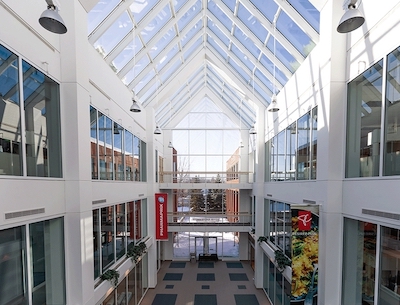 A section of the large, brightly lit atrium at 400 Sainte-Croix. (Courtesy Groupe Mach)

JLL handled the sale for Loblaw. Dionne-Legendre said the transaction took 12 months due to lengthy lease negotiations with Provigo, environmental assessments and delays caused by the coronavirus pandemic.

Asgaard, which is leasing the building for Groupe Mach, is in discussions with potential tenants interested in leasing 40,000 to 60,000 square feet. Rents are about $15 per square foot net or $29 per square foot gross.

The building is in very good condition and does not require much in the way of renovations, Dionne-Legendre said.

“Our biggest challenge will be to maximize space and to transform the common areas into more leasable areas.”

Because it was built as a single-tenant property, the property currently has about 26 per cent of its floor space as common areas. The goal is to reduce common areas to about 10 to 12 per cent of the total space.

The atriums “will help us lease the property,” he said. However, the challenge will lie in maintaining the light the atriums generate while also maximizing the leasable area they currently occupy.

Other features of 400 Sainte-Croix

400 Sainte-Croix has 370 interior and 442 exterior parking spaces. Once leasing at the property is stabilized, Groupe Mach will look at transforming the exterior parking lot into additional office space.

The building has a gym of about 15,000 square feet in the basement which will remain, but may be leased to a third-party manager. There is also an auditorium in the basement that will be kept.

A former Loblaw grocery store next to 400 Sainte-Croix has sat empty for years.

Dionne-Legendre said Loblaw, which owns the vacant building, is waiting to see what the city plans for the surrounding neighbourhood before going to market.

Once it goes to market, Groupe Mach would be interested in obtaining the property, possibly as additional office space or as a residential development, he said.