The $220-million Garneau project in Edmonton, adjacent to the University of Alberta campus, is be... 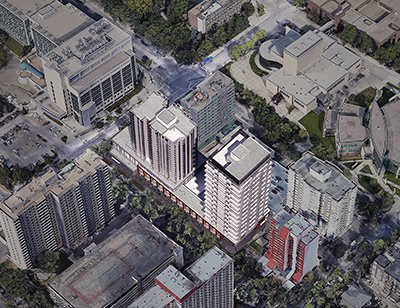 The $220-million Garneau project in Edmonton, adjacent to the University of Alberta campus, is being billed as one of the largest private student housing projects to go forward nationally in the past 10 years.

The project by Maclab Development Group, financed by Canada ICI, includes a two-tower development of 20 and 30 storeys atop a shared podium. It’s located at 86 Avenue and 112 Street in the mature residential neighbourhood of Garneau.

“What made this project so significant is that there hasn’t been a project of this scale built in the university area in decades,” said Glenn Fisher, director of mortgage origination with Canada ICI.

“Maclab has recognized that there’s an opportunity there and that comes from the investment that the government and the industry has put into the U of A to drive them to be a world-class university,” Fisher said. “I think just recently it was ranked as one of the Top-100 universities in the world and that comes from their investment in research and in biotechnology, in artificial intelligence.

The towers share a common podium founded on two levels of below-grade parking.

The project is currently under construction with expected buildout in three years. The plan is to deliver the student housing for the fall of 2023.

Maclab assembled property over many years

Bill Blais, president and CEO of Maclab Development Group, said the site is actually a parcel the company started assembling in the 1960s. It acquired the final piece over the last few years.

“We’ve toured a lot of developments throughout the U.S. and Eastern Canada and we’re really excited to bring a lot of ideas that we learned from people in those areas into the Edmonton marketplace,” he said. “Everything we’re building is for rent. We’re interested in building things that we can continue to own for the next 50 to 100 years.”

Blais said the company is working on some different naming conventions for both towers but right now it will be called the Garneau project until the towers get closer to lease-up.

“The community itself has all the fantastic amenities that anyone would want to be close to. Great restaurants, coffee shops, retail. It has easy access to the LRT system. Fantastic access to Edmonton’s River Valley, which is an absolute gem of an asset for anyone who lives here.

“It has all these things that really require a phenomenal development and I think we’ve got something designed here that people are going to really enjoy seeing as it comes out of the ground.”

Blais said the U of A, founded in 1908, will continue to grow and evolve. He said off-campus student housing has been successful in Eastern Canada, throughout the U.S. and throughout the world.

Maclab is a real estate development company based in Edmonton. Blais said the company sees itself as neighbours developing neighbourhoods.

The family-owned company has been around for more than six decades. Maclab owns a number of multiresidential assets it has developed over the years. It also builds new neighbourhoods and owns the commercial real estate in those neighbourhoods.

“One of the themes for us is that our values and our commitment to our community are non-negotiable,” said Blais.

The student housing project comes in the midst of the fourth wave of COVID-19. This investment is a testament to the belief students need to be on-site and learning together as opposed to online, said Fisher.

“The market rental tower, obviously that’s going to still be geared toward students and professors and nurses and doctors. The kind of people that are going to be renting there are still going to be students, but some people want to live the dorm life and some people don’t,” he said.

“Some people want their own private residence. They have that opportunity.”

“The other reason this is significant is that on the south side where the university is located, it’s kind of landlocked to a certain degree,” Fisher added.

“It’s hard to get these larger-scale developments green-lit through that Garneau neighbourhood. So that has to do with the relevance and significance of this project as well.”

Fisher said Canada ICI is a real estate financing company that provides debt advisory and also has an asset management group with more than $2 billion in AUM.

“We are a lender but we’re also a debt advisor through arranging mortgages. We pair up borrowers and lenders with capital,” said Fisher, adding the company focuses on all aspects of real estate.

Podcast: Redevelopment in the City of Edmonton

Gerald Tostowaryk Commercial Redevelopment Edmonton Sep. 9 2021
M
Mario Toneguzzi Business reporter
Mario Toneguzzi, based in Calgary has 37 years of experience as a daily newspaper writer, columnist and editor. He worked for 35 years at the Calgary Herald covering sports, crime, politics, health, city and breaking news, and business. For 12 years as a business writer, his main beats were commercial and residential real estate, retail, small business and general economic news. He nows works on his own as a freelance writer and consultant in communications and media relations/training.