CBRE has listed a city block with significant development potential for sale in Edmonton’s downto... 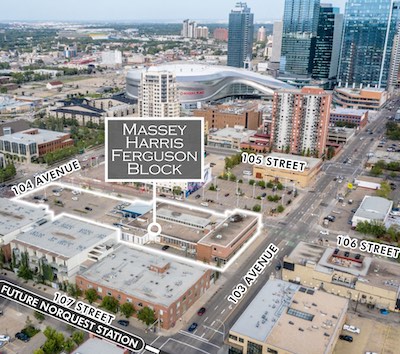 The Massey Harris Ferguson Block in downtown Edmonton is for sale. (Courtesy CBRE)

CBRE has listed a city block with significant development potential for sale in Edmonton’s downtown warehouse district. The 74,884-square-foot Massey Harris Ferguson Block is close to MacEwan University and the Ice District.

“This site is going to be a significant opportunity for a developer to capitalize on the growth of downtown and really become a cornerstone of the warehouse district,” Cody Nelson, associate vice-president, CBRE Limited, told RENX in an interview.

A 74-year old building on the south end of the block has been vacant for a decade. The north half of the property is a surface parking lot. The asking price for the Massey Block, which is on 106th Street between 103rd and 104th Avenue, is $14.5 million, or $193 per square foot.

“You’re looking at the running average for land sales in downtown since 2014 of about $224 a square foot for land,” says Nelson. “This is priced below the running market average. Combined with the opportunity to control an entire city block, this represents a great opportunity for someone with a little bit of patience.”

The block is zoned for up to 1,300 residential units at 16 times FAR (floor area ratio). Nelson says the maximum density for most of the area is six times FAR.

Zoning allows for up to 50 storeys

The zoning allows for building heights up 492 feet, or close to 50 storeys. Nelson says there is a sunset clause on that height, requiring start of development by September 2022. After that, the maximum drops to 197 feet, but the density and unit number remains in place.

A prospective owner would probably want to adjust the zoning, says Nelson.

“Given what we’ve seen from the overall market in terms of rental absorption, condo sales and office space requirements, whomever takes on this property . . . is likely not going to take on something as densified as existing plans would suggest,” he says.

The current owner of the property, Ontario-based Rise Real Estate, bought the Massey Block in 2011, with a plan to develop the site for student housing for MacEwan University.

“They’ve come to the conclusion they’re always going to have something else they’re working on in their own backyard. Rather than continuing to sit on it, they’ve decided to find a new buyer to . . . take the property through the process to construction,” says Nelson.

In addition to the university, the block is close to existing and planned LRT stations and has one nearby grocery store with a second slated to open in 2022. The city is also planning a park, with playground and other amenities, within a couple of blocks.

“The warehouse district, with the development of 104 Street, is going to become the focal point for urban living as downtown continues to evolve,” says Nelson.

The two-storey building on the site was built in 1947 for the Massey Harris Ferguson tractor company. It was bought in the early 1970s by Healy Ford, which used it as a vehicle showroom. Healy Ford moved out in 2011, selling the property and leaving the building vacant.

There was community debate in 2014 on the fate of the Massey building, one of the first buildings in the downtown built in the modernist style by architects Richard Palin Blakey and his brother William.

City councillor Scott McKeen, who represents downtown, says council approved “a direct control of those lands that required saving of that building, but considerable up-zoning in return.”

Some recent developments in Edmonton have incorporated architectural features or facades from legacy buildings in new projects, Nelson says.

“That is an option,” says McKeen. “I think the preference is always to save the building and do something interesting around it.”

“As we get a little more sophisticated around built heritage and . . . the Edmonton story, some of those buildings have greater and greater value.”

Nelson says the property, which had an automotive shop on it, will require some remediation.

“Given you’re going to see excavation of the entire site, it’s a matter of small extra cost to dispose of some of that soil and building material in the right way,” he says.

Once COVID restrictions lift and the Rogers Place arena and entertainment complex (home of the NHL Edmonton Oilers) is up and running again, the parking lot on the property can provide ongoing revenue, says Nelson. The lot has generated just under $200,000 per year.

“There’s certainly good opportunity for maintaining and increasing that income through parking during an investor’s planning stages for development,” Nelson says.

Kathy Kerr Residential Buying and Selling Edmonton May. 31 2021
K
Kathy Kerr Business reporter
Kathy Kerr is an Alberta journalist with four decades of experience as a writer and editor. She covered general news and provincial politics as a reporter for the Calgary Herald in the 1980s and worked at the Edmonton Journal from the 1990s to 2016 in several editor roles, including business editor, city editor, features editor, editorial page editor and finally deputy editor of the Postmedia Edmonton newsroom. Kathy is now a freelance writer and commentator.