The COVID-19 pandemic created a tough year for the tenants of Gather Co.’s downtown Edmonton buil... 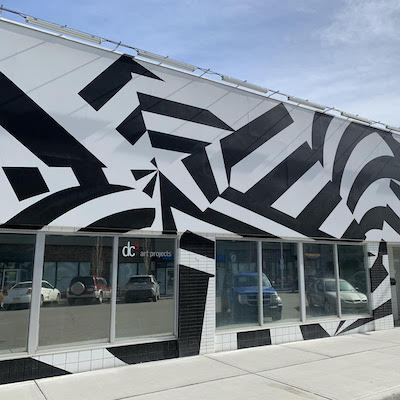 The Dazmo building in Edmonton is part of Gather Co.’s portfolio. The firm’s specialty is to acquire aging or historic buildings and breathe new life into them. (Kathy Kerr RENX)

“We’ve had a little bit of turnover but we’re working with everyone to make sure everyone comes out of it and so do we,” Gather Co. partner Devin Pope told RENX in a recent interview.

Gather Co. is a family business, managed by Devin, his father Kelly and sister Lara Lukian-Pope. Devin said he knows how tough it’s been on the restaurant industry first hand because he also owns the Mercer Tavern, a large restaurant in one of the firm’s properties.

Gather Co.’s expertise is in breathing new life into older buildings. The firm’s business model involves partnering with the independent entrepreneurs who set up shop in its buildings.

“We like to gather entrepreneurs and communities together to make Edmonton a better place,” Pope said.

One of the first of those entrepreneurial ventures was Corso 32, an award-winning high-end restaurant in the 11,000-square-foot Jasper 104 building.

Pope said when he started talking to chef and restaurant entrepreneur Daniel Costa 12 years ago, he knew he wanted to accommodate his vision for the building, which now houses Corso 32 and Costa’s other projects Uccelino and Bar Bricco.

Costa said there’s a family element to the relationship with the Popes. He won’t be specific about what accommodations were made, but he indicates Gather Co. has been flexible throughout the pandemic.

Flexibility on tenant leases is a key component of the relationship Gather Co. has with the tenants in its 42,000-square-foot Mercer Warehouse. The Mercer, built in 1911, is on the edge of the city’s now bustling Ice District on trendy 104th Street.

Tech incubator at The Mercer

Pope said he and his dad looked into the Mercer long before talks began on Edmonton’s nearby new arena: “The building was so beautiful and no one was doing anything with it, so we ended up taking it over.”

Pope walked Ken Bautista and Cam Link, two entrepreneurs working on a tech incubator, through the old building, which they loved despite a leaky ceiling.

The refurbished warehouse now houses Startup Edmonton on the top floor, home to a number of seed-level and small startup tech firms. The second floor includes offices for graduate and growing tech companies.

Pope added that he and his father have also directly invested in some of the tech firms starting out in their building.

“We were involved in a company called Varafy who actually just did get acquired – they’re in the edtech sector,” said Pope. The company has also invested in a pre-seed fund called Flight Path Ventures. 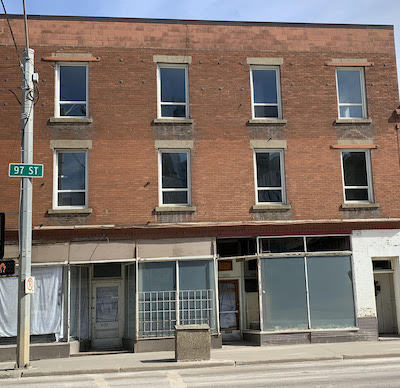 Gather Co.’s Stovel building in Edmonton is about to receive a $1.356-million facelift to accommodate affordable housing for women and ground-floor retail. (Kathy Kerr RENX)

One of Gather Co.’s latest projects tips into the charitable sector with the redevelopment of the Stovel Block, a heritage building in the Quarters District, into transitional housing for homeless women.

Pope says the initial plan was to redevelop the Stovel into a co-work space until COVID forced a rethink. The building is in the city’s inner city and the plight of Edmonton’s homeless population has been magnified by the pandemic.

“The homelessness and poverty and the housing situation was quite sad. We started looking at maybe it should go back to housing. It was a rooming house.”

Two floors of the three-floor structure will be used to accommodate about 30 women. Boyle Street Community Services is partnering on the project, collecting donations toward the project and providing referrals for clients.

Gather Co. will act as managers of the building, which should be in operation in a few months.

Pope said the main floor of the building will eventually house independent retailer Glass Bookshop. L7 Architects and the city are working on the restoration.

Edmonton downtown city councillor Scott McKeen has encountered the Popes several times over the years. He applauds their commitment to the vibrancy of downtown Edmonton and preserving older buildings.

“They’re not easy projects – to go in there and breathe new life into heritage buildings,” McKeen said.

Other Gather Co. properties include the Dazmo building, an industrial building behind MacEwan University which was painted with a striking black and white pattern by a local artist. A one-storey warehouse in the same light industrial area, which houses an art gallery and a fitness company, also features signature exterior art.

The firm owns the main core commercial unit of The Pearl condo building in the Oliver district. That podium structure houses a restaurant called Toast Culture and Bar Clementine, a buzzy cocktail spot.

Gather Co. also plans to redevelop the Milla, a vintage buff-coloured stucco building directly north of the Ice District which was the site of Edmonton’s first gay bar.

RENX Staff Commercial Transactions Ontario Apr. 27 2021
K
Kathy Kerr Business reporter
Kathy Kerr is an Alberta journalist with four decades of experience as a writer and editor. She covered general news and provincial politics as a reporter for the Calgary Herald in the 1980s and worked at the Edmonton Journal from the 1990s to 2016 in several editor roles, including business editor, city editor, features editor, editorial page editor and finally deputy editor of the Postmedia Edmonton newsroom. Kathy is now a freelance writer and commentator.