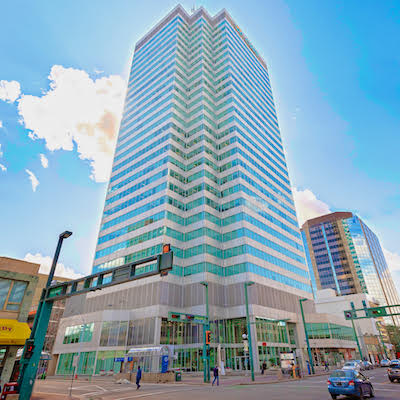 The Canadian Western Bank office tower in Edmonton has been sold by BentallGreenOak to Redstone Group. (Courtesy Colliers / Mat Simpson)

Redstone Group has acquired Edmonton’s Canadian Western Bank Place downtown office tower, a sale which closed in late 2020 and stands as the city’s largest office transaction of the year, according to Colliers International.

The 30-storey, 408,983-square-foot tower was sold in an off-market transaction by BentallGreenOak (on behalf of its institutional partners) to Redstone, a Vancouver-based private investor.

Lead brokers on the deal were Andrew Simpson and Mark Swaenepoel of Colliers Capital Markets.

“The sale represents a strong vote of long-term confidence in the Edmonton market,” Andrew Simpson, Colliers’ vice president of capital markets, said in an email exchange with RENX.

Canadian Western Bank Place, completed in 1981, is a class-A office tower in the centre of downtown Edmonton at 10303 Jasper Ave. When it opened, the building was called the Principal Plaza Building.

It holds a BOMA Best silver certification and is connected to the city’s downtown pedway pedestrian network, which links about 40 buildings and parkades along 13 km. of covered pathways.

At date of sale, the vacancy rate in the building was eight per cent, well below the overall downtown market vacancy rate of 17 per cent.

The site also offers a multi-level parkade adjacent to the tower which contains more than 550 stalls.

The Edmonton and Calgary office markets have been in the doldrums for several years due to a major downturn in the oil and gas sector in Alberta. Conditions have been complicated by the ongoing pandemic during the past 10 months.

“We felt this was a great time to enter the Edmonton market and we’ve been looking for a while for the right type of asset,” said Ayaz Velji, vice-president of Redstone Group.

“We thought this was a great building, great tenants and great area.”

While recent high-profile transactions in Edmonton have centred primarily on the Ice District area near the city’s Rogers Place arena (home to the Edmonton Oilers and a major concert and event venue), Velji said there is a good opportunity to revive the Jasper Avenue area of the downtown as some new projects come on line.

The Redstone Group bills itself as one of British Columbia’s largest private real estate organizations, owning and managing 4.8 million square feet of properties according to its website.

Redstone Capital owns and manages buildings in the lower mainland of B.C., Ontario, Phoenix, Los Angeles, Denver, and in the State of Washington cities of Spokane, Olympia and Seattle, said Velji.

Among its office/commercial portfolio are: the Bank of America building in Spokane; and the Tamarac Plaza I, II and III complex in Denver. It owns numerous properties in Metro Vancouver, including the Surrey Central Business Park buildings I, II, III and IV; and the Station Tower in Surrey.

Other than to state that “we own lots of millions of square feet,” Velji declined to disclose any other details about Redstone or its assets. He did, however, say the company plans to continue to grow its holdings.

EDITOR’S NOTE: This story was updated to reflect the transaction was made on behalf of BentallGreenOak’s institutional partners, and to attribute the Colliers quote to Andrew Simpson.

RENX Staff Commercial Transactions Ontario Jan. 8 2021
K
Kathy Kerr Business reporter
Kathy Kerr is an Alberta journalist with four decades of experience as a writer and editor. She covered general news and provincial politics as a reporter for the Calgary Herald in the 1980s and worked at the Edmonton Journal from the 1990s to 2016 in several editor roles, including business editor, city editor, features editor, editorial page editor and finally deputy editor of the Postmedia Edmonton newsroom. Kathy is now a freelance writer and commentator.