Manulife Investment Management announced Thursday morning it has acquired Phases 3 and 4 of the n... 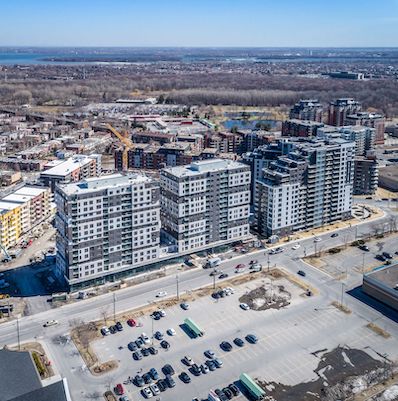 Manulife Investment Management announced Thursday morning it has acquired Phases 3 and 4 of the new EQ8 LaSalle purpose-built apartment development in Montreal’s borough of LaSalle for $105 million.

The two, newly constructed multifamily buildings stand at 16 storeys apiece and comprise a total of 300 units.

“The City of Montreal’s economic story is positive,” said Michael McNamara, the head of real estate investments for Manulife, in a release. “Infrastructure investments, a tightening labour market and government support for technology have all contributed to economic advancement, and ultimately, a market we’re looking to expand in.”

The property is in the southwest portion of Greater Montreal, on the Island of Montreal. Acting as a major industrial and commercial hub, LaSalle is equidistant from downtown and Trudeau International Airport.

The borough is also situated among many amenities renters are looking for.

Residents of the area benefit from access to 2.3 million square feet of retail, including two large retail centres adjacent to the property, as well as immediate access to public transit including the nearby Angrignon Metro station and main, arterial highways.

The two towers are part of a larger, phased development at the site which also includes two other completed residential towers. The project includes both rental and condominium towers.

According to Shupilov Real Estate, which cited data from the Quebec Construction Commission, the Phase 3 and 4 towers each represented an investment of $22 million by the developer, Montreal-based Armco Immobilier.

Construction on the Phase 3 and 4 towers began in 2017. EQ8 was completed earlier this month and is fully leased.

Through its real estate group, Manulife Investment Management develops and manages commercial real estate for customers around the globe.

Its portfolio includes millions of square feet of office, industrial, retail and multifamily space in major metropolitan markets. As of Sept. 30, 2019, the real estate portfolio totaled over 58 million square feet.

Manulife Investment Management is the global wealth and asset management segment of Manulife Financial Corporation. It draws more than 150 years of financial stewardship across institutional, retail, and retirement businesses globally.

Headquartered in Toronto, the firm operates under Manulife branding throughout the world, with the exception of the United States, where it operates under the John Hancock banner.

Manulife Investment Management has approximately $854 billion Cdn in assets under management and administration.