Developer David Choo calls Monocle Westboro the “boutique of the boutique” of condo projects in O...

Developer David Choo calls Monocle Westboro the “boutique of the boutique” of condo projects in Ottawa. The luxury four-storey, 62-unit building is part of the final phase of Choo’s master-planned Q West development in the west-end community. 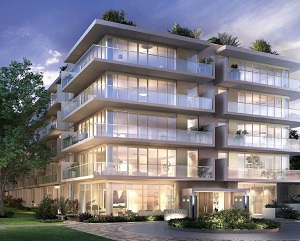 “It’s a luxury building and because of its location it is exceptional,” said the founder and CEO of Choo Communities and Ashcroft Homes during an interview at his west-end head office. “Monocle, when it’s built, will be the most unique condo in Westboro.”

Choo is pulling out all the stops for Monocle, where the “spacious” open-concept units are selling for about $850 per square foot. During the pre-sale phase alone, 14 of the well-appointed units were snapped up.

Among a long list of amenities are 10-foot ceilings, wraparound balconies, rooftop terraces (including the opportunity to purchase a private rooftop space), a gourmet-ready kitchen, top-of-the-line appliance package, 5,000 square feet of eventing space, a gym , a 24/7 concierge, a la carte housekeeping and laundry, and more.

Purchasers can also buy multiple units and combine them – which ultimately could mean fewer than 62 units in the building.

Then there is the location, in one of Ottawa’s fastest-growing urban communities. Westboro has come a long way in the past decade from a somewhat shabby, aging community to one of the city’s most vibrant and desirable places to live. The imminent arrival of a light rail transit line (to open this fall) sparked a flurry of development from retail, entertainment and commercial to multi-residential.

Choo and Ashcroft have been at the heart of the resurgence.

Q West started as a relatively modest concept in the early 2000s when Choo purchased the first of three properties he has been able to acquire along a block of Richmond Road, the neighbourhood’s main east-west artery.

In 2010 came the crowning piece of the puzzle, from Choo’s perspective.

“Then to our surprise, and it was quite a surprise, one day in July we got an RFP that the Sisters of Visitation was selling their 5.2-acre parcel. So being a developer and not wanting anyone to come in and invade my territory that I’d created, we decided we had to buy it.”

Choo paid $15 million for the site of the former convent, which includes a long-neglected stone heritage structure which housed the nuns: “That probably was the high-water mark for the purchase of any site up to that point in Ottawa.”

Out of those purchases emerged a plan to construct nine buildings, and a promise from Choo to save the heritage-designated convent building itself, in some form.

“Did I think in 2010 when I bought this site that I’d be doing this (luxury condo)? The answer is no,” Choo said. “But that is the creative process as time goes on, and you reflect and absorb what could be.

“The nice thing about being a developer and having a canvas as big as five acres in an urban area, you can paint the canvas many different ways, right?”

Six of the buildings have been constructed, three on each side of Richmond Road, containing a variety of residential and retail/commercial uses. Virtually all of the 600 existing residential condos in the first two phases have been sold.

This final phase will include Monocle, an Alavida Lifestyle Properties retirement residence (another of Choo’s companies) and a proposed mixed-use building which will incorporate about two-thirds of the former convent building.

They will be constructed just south of the existing condos. The convent building sits in the middle of the property.

The mixed-use structure (condos or apartments, as well as a mix of retail, commercial and possible community uses) still requires approval from the city because it would be attached to the former convent. The proposal requires demolition of the west wing, Choo said, about 10,000 square feet of the 35,000-square-foot structure.

Choo’s plans for the heritage building have faced opposition from local residents and heritage groups, who demand he stick with an original pledge to incorporate community uses. However, he hopes that hurdle will finally be overcome and all three remaining properties can be built at the same time.

Choo said Q West will ultimately add about 2,000 residents to Westboro, noting 2016 census data showed the neighbourhood contained about 21,000 residents. “It means we’ve added about 10 per cent to the population of Westboro and (they’re) very urban dwellings. That’s significant.

“Most people get a chance to plug in a condo here, a condo there. This is actually creating, adding 10 per cent to the population of Westboro.”

“You can touch the maples”

In addition to the amenities in the building, the grounds around Monocle contain mature maple trees, a pathway known as the Nun’s Walk and Byron Park at the rear. These features will all be preserved.

“Literally, you can touch the maples from your balcony,” Choo said of several of the units. “These are balconies in most cases which are eight feet deep, which means you can actually do some serious summertime dining on the balconies.”

Monocle West is designed by David Blakeley Architect Inc., with interiors by Drake + Khan Design. Choo’s Ashcroft Homes will be the builder, while Milborne Group is handling sales.

One key to providing additional services for the residents, while keeping condo fees down, will be the neighbouring retirement residence. Choo plans to have staff from the home double as service providers at Monocle.

“Ask yourself which building in Ottawa can you get housekeeping as an a la carte service and the answer is none. This will be the first condo building where a la carte housekeeping and laundry service to your condo is provided by the building next door.”

The entire development has very high walkability and cycling scores as well.

“If there are people who want to live In the urban setting of Westboro, but want the conveniences of a condo, then this is for them,” Choo said. “This is very much an aspirational building. We’re not looking at what Westboro is today, but what Westboro will become.”