Montreal’s industrial real estate market has become a landlords’ market for the first time in at least 20 years and its office sector is on its way to following suit, says Avi Krispine, managing director of CBRE Quebec. 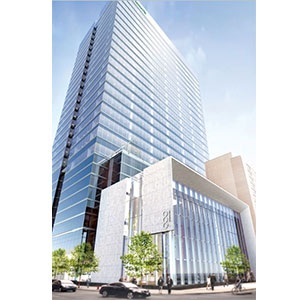 Maison Manuvie in Montreal, where the industrial real estate sector has become a “landlord’s market” and the office sector could soon follow suit, according to a CBRE report.

“The market in Montreal is looking very healthy in the next three years,” he says. “We’re in a great place right now.”

But the situation is better today because a number of companies are expanding, versus one or two big players three years ago.

“You feel it way more today than you would feel it in 2014 when it was all due to one big tenant,” Krispine says.

“We’ve seen so much energy, so much activity and such a low vacancy rate on the industrial side.”

In addition, the gap between asking rental rates and actual transactions has closed dramatically in Montreal’s 301.5-million-square-foot industrial sector.

While the gap was at least 25 per cent under a year ago, “today, you’re lucky if you get a gap of even five per cent because there’s such a lack of product out there and again the economy in Montreal is doing very, very well.”

There is less and less land available for industrial development, Krispine says.

Montreal’s office sector is becoming a landlords’ market thanks to the city’s improving economy that added more than 70,000 net jobs in 2016, Krispine says.

As a result, there was one million square feet of positive net absorption of office space in the first quarter of 2017, the best start of a calendar year for tenant demand in Montreal since the late 1990s.

While tenants used to have a number of options due to high vacancy and large amounts of office space available for sublease, the improving economy has tipped the balance back toward landlords.

In addition, the amount of sublease office space in the central business district has fallen by 60 per cent in the last year to a five-year low, an indication companies are performing strongly and are confident in their ability to grow, Krispine says.

According to a CBRE first-quarter 2017 office market report titled “Never-ending clear sky,” vacancy rates in the downtown core declined from 10.6 in the fourth quarter of 2016 to 9.8 per cent in the first quarter of this year, while the net asking rent for class-A properties increased from $21.21 to $22.32 per square foot and tenant inducements declined.

As a sign of improving health in Montreal’s office sector, he notes the 28-storey Maison Manuvie, now under construction downtown, has only about 1 1/2 floors vacant. “Nobody thought this would have ever happened and it would have filled up so fast.”

As well, when the 26-storey Tour Deloitte was being built, “people were saying ‘there’s no need to pay $55 to $60 a square foot gross; it doesn’t make sense. It’s never going to happen.’ It’s maybe 1 1/2 floors away from having the entire building filled up.”

Krispine expects the situation in the industrial and office sectors to last a long time because “we are healthy, but still very cheap compared to the rest of Canada.”

As a result, landlords can ask for more and tenants can afford to pay more before real estate becomes their No. 1 expense ahead of labour.

The outlook is bright as well due to the more than $20 billion of infrastructure investments still to be delivered in the city, he says.

Unlike a few years ago, when Montreal was awash in allegations of political corruption, “companies have become ambassadors of the city,” Krispine says.

“People understand that there is so much money (being) invested in infrastructure, there are new companies coming into the city, the economy is rolling and people have finally gotten back to being proud of their city versus a few years ago.

“They’re confident, they’re proud and they sell their city.”