Greater Victoria’s industrial vacancy rate continues to drop as demand to buy and lease workspace in the region outstrips the pace of new supply. 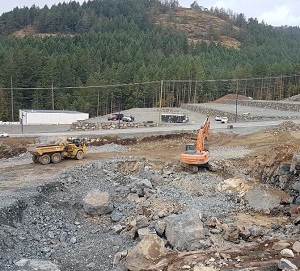 Industrial vacancy fell from 2.4 per cent in 2017 to a decade-low 1.71 in 2018, according to Colliers International’s summer 2018 regional industrial market report.

The report said demand from residential and commercial construction, Department of National Defence contracts, technology and manufacturing have all kept demand surging in a market that is squeezed for new developable lands.

Only 91,733 square feet of new supply has been added to the regional market this year and none of that was in the City of Victoria. Average rental rates climbed to $13 per square foot, up 50 cents from the year prior, the report said.

The Greater Victoria market, which includes Victoria, Saanich and Langford among others, mirrors the challenging Metro Vancouver industrial situation, but on a smaller scale, said Ty Whittaker, a senior vice-president with Colliers in Victoria.

“We have been fortunate enough to see a real downward pressure on vacancy, which has (given) the landlords certainly more powerful positions with appreciation and rental rate increases,” he said.

The vacancy rate started its drop about 24 months ago, he said.

“Before that, I would say that our economy was fairly stagnant, and we hadn’t really felt the boom of the residential (market),” Whittaker told RENX in an interview. “Since that point, we’ve had a real strength in our residential market which is driving the health of our business parks.”

Victoria region at a “critical point”

Whittaker said the region could use another 300,000 square feet of industrial space immediately.

“What we’re now struggling with is that we’re kind of at a critical point, where there are companies needing to expand and they just don’t have a lot of options to look at,” he said.

He said developers in the capital region tend to not build on speculation, relying on securing leases or buyers before the shovels hit the ground. The entire regional industrial inventory is only about 9.2 million square feet.

“We tend to not be able to react as quickly as maybe Vancouver, where there’s a confidence that if you build it, you’re going to fill it up in a timely manner,” he said.

Most of the mature business parks in Greater Victoria are at capacity, he said.

Developers are now focusing more on the fast-growing Westshore communities, including Langford, which is roughly a 35-minute commute on the Trans-Canada to downtown Victoria, Whittaker said.

The Greater Victoria population reached nearly 370,000, according to the 2016 census.

Langford has experienced the most growth, Whittaker said. “It’s the fastest-growing municipality in B.C. except for Surrey. And they have a huge amount of residential that’s happening, but they’re also — to their credit — focusing on some industrial (development) and people are locating out there.”

Langford-based developer Keycorp has been among the busiest on the Westshore. Keycorp is set to complete its 20-acre Glenshire Business Park in Langford by the end of the year.

The company has been in business for 40 years in B.C., focusing on rezoning, planning and development of more than 6,000 residential units, as well as several office and industrial projects.

The single-phase park is located just off busy Sooke Road, which links the City of Sooke to Langford and the Trans-Canada Highway.

Two years into the development, about 35 per cent of the commercial sites remain available, said Rohan Rupf, the company’s development manager. The parcels at Glenshire range from about a half-acre to two acres in size and are ideal for companies requiring external storage or light industrial service bays, he said.

“It’s not heavy industry in the Glenshire Business Park, but it’s a service-commercial use,” Rupf said. “Some of the take-up has been within the building supply industry and automotive.

“Since the (land) deal was completed last year, we have been working on the development of the land,” said Seamus Brennan, the owner of TFIRMA Development Corp, which has been hired by CMBP to develop the business park lands.

“We completed the zoning of the property and are working on the servicing and planning for the first phase, which we hope to bring to the market in 2019.”

The CMBP is expected to add about 4,000 permanent jobs. The developers have yet to launch their marketing program for the park.

Developers have been encouraged by the lack of competing product in the region and by Langford’s cooperative and aggressive approach to residential and commercial growth, Brennan said.

“People (are) looking for more industry as we grow, and there is literally nowhere to go,” he said. “There’s just no tracts of land for somebody to put together . . . for industrial.”